The opening of the new Samuel de Champlain Bridge has become a source of marvel for Montrealers. Not just because the span soars in an elegant arc over the majestic St. Lawrence River. Because it’s opening at all.

Montreal is a city where it took 11 years to put a roof on the Olympic Stadium and three decades to build a symphony concert hall. Roadwork projects drag on with no discernible end date. The new federal bridge, on the other hand, is being delivered only six months late.

For Montrealers, that counts as extremely early.

“The biggest challenge for us was the schedule,” said Guy Mailhot, the bridge’s chief engineer. “There was no free time, we had to go, go, go. For a project of this size and complexity, we’re happy where we are now.”

The $4.2-billion link between Montreal and its South Shore suburbs opens to traffic in one direction on Monday – St. Jean Baptiste Day – and in the other direction a week later, Canada Day. The festive timing provides visibility in an election year for the federal Liberals; the party has already put up billboards near the bridge’s approach reminding voters that it kept its promise to maintain the structure toll-free.

Politics aside, the 3.4 kilometre bridge is set to become a contemporary new gateway into Montreal and a dominant landmark on the city skyline. Measured by deck surface, the Champlain becomes the biggest bridge in Canada, Mr. Mailhot said.

“We’ve achieved a world-class piece of infrastructure that Montrealers and Canadians can be proud of,” he said.

The opening also accomplishes one significant task: Allowing motorists to bid adieu to the maligned, decrepit, original Champlain Bridge, which opened in 1962 but looks about a century older. Its premature deterioration made construction of its replacement urgent and it will be demolished.

The new Champlain bridge runs parallel to its old namesake like the modern millennial child of its postwar parent. The new span seeks to be everything its previous incarnation is not.

For one, next to its low-slung and industrial-looking predecessor, the new cable-stayed bridge looks light and airy. Its sky-bound central tower anchors a harp of 60 cables that extend out toward the deck like the ethereal sail of a boat.

The bridge itself doesn’t run in a straight line. Instead, it curves gently so that Montreal-bound motorists get a kinetic view of the city skyline opening up in a panorama. Also, the bridge isn’t one long slab. Its three side-by-side decks separated by open space, which lets sunlight filter onto the supporting piers below.

“We wanted the government to carry out a work of quality and that was exemplary,” said Nathalie Dion, president of the Quebec Order of Architects, who sat on an expert committee to advise the federal government. “It’s elegant and very streamlined.”

One reason Montrealers feel a tinge of excitement about the bridge is the fact they watched it go up in real time. Motorists on the old bridge routinely slowed down to watch one of North America’s largest infrastructure projects rise piece-by-piece before their eyes. In winter, they could see construction crews working in sub-zero temperatures high above the churning waters of the St. Lawrence. In a sense, the workers were on a stage and they knew it.

“The Champlain Bridge was the project every worker wanted to be on. They felt pride to say ‘I was there,' ” said Sylvain Boivin, business agent for Local 711 of the ironworkers’ union, whose members were involved in the project. “Their kids would say, ‘That’s Daddy’s bridge.' "

Long hours, night shifts and extended work weeks during the four years of construction took a personal toll, though. About 40 workers ended up getting separated or divorced, Mr. Boivin said.

“They’d leave the house at 4 in the morning and work until 10 at night, and spend two hours in traffic. It was work, sleep, work, sleep. It had a direct impact on couples,” he said.

“These workers are proud they took part in the project, but they made sacrifices,” Mr. Boivin said. “I see the collateral damage.”

The bridge, which is a public-private partnership, is not problem free. The recreational path will not be completed in time for next week’s opening. And the six-month delay in delivering the project could bring penalties starting at $100,000 a day for the building consortium, led by SNC-Lavalin Group Inc. Ottawa and the consortium are in negotiations.

But at least motorists can look forward to a bridge that is supposed to function for 125 years. With an eye to the next century, officials have placed a time capsule inside the structure that includes a container of maple syrup, a hockey puck signed by the Montreal Canadiens, an LGBTQ pride flag as well as Mr. Mailhot’s iron engineering ring. To reflect the current mood, the capsule should probably also contain the ardent hopes of Montrealers that the bridge was built to last. 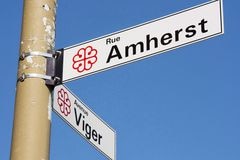