Ontario’s COVID-19 cases, hospitalizations and occupancy in intensive-care units are not significantly increasing, but the province remains in a “fragile” situation as the cold weather approaches, according to new modelling.

The province’s COVID-19 science and modelling advisory tables released new projections on Tuesday, which show that Ontario is doing much better overall than Western provinces in combatting the virus, while scientists continue to urge caution and push for increased vaccinations as more people move to indoor activities.

“I think we’re better off than I certainly expected a month ago,” said Arthur Slutsky, a research scientist at St. Michael’s Hospital in Toronto and member of the science table. “We’re doing things a little more carefully than in a lot of other jurisdictions. ... Certainly vaccinations are the key. Vaccinate, vaccinate, vaccinate. And I’d like to see that, honestly, going up at a faster clip than it has been.”

In contrast to the relatively optimistic picture in Ontario, the situation remains dire in Alberta and Saskatchewan, where record-setting infection rates have swamped intensive-care units and forced the widespread cancellation of surgeries. B.C.’s infection rates also remain well above most of the rest of the country, but are significantly lower than on the Prairies.

Alberta and Saskatchewan have the highest rates of COVID-19 infections, hospital admissions and deaths among the provinces, by large margins. The per capita infection rates in those two provinces are more than eight times the rates in Ontario, and the recent fatality rates are more than seven times higher. If Ontario had Alberta’s COVID-19 rates, the province would have about 5,400 new infections a day and nearly 900 people in intensive care.

The two Prairie provinces took a more aggressive approach to lifting public-health measures than most others in Canada, removing nearly all of their restrictions over the summer. Their governments were recently forced to bring back some measures, including mandatory masking, and introduced vaccine passport systems after ruling that out.

Alberta’s Chief Medical Officer of Health, Deena Hinshaw, has acknowledged that provinces such as Alberta that lifted public-health restrictions early are doing worse than jurisdictions that kept measures in place.

While cases have increased in 19 of Ontario’s 34 regional public-health units over the past two weeks, the numbers in Toronto and nearby Peel and York Regions have declined. Cases have gone down overall since April, although they are up from their August low point. Ontario on Tuesday reported 466 new cases of COVID-19, including 347 in people who are unvaccinated or whose vaccination status is unknown, and 119 in fully vaccinated people. Test positivity also appears to be declining.

Previous modelling released on Sept. 1 presented a wide range of outcomes, but Ontario is tracking below even the best-case scenario, which forecast a peak of just under 1,000 new cases a day in September, followed by a steady decline into October.

The new modelling shows a similarly broad range of predictions, ranging from a potential high of 5,000 new cases a day by November, compared to almost 2,000 a day if current public-health measures are maintained. A third scenario suggests a lower trajectory of cases, with only a few hundred by that time. 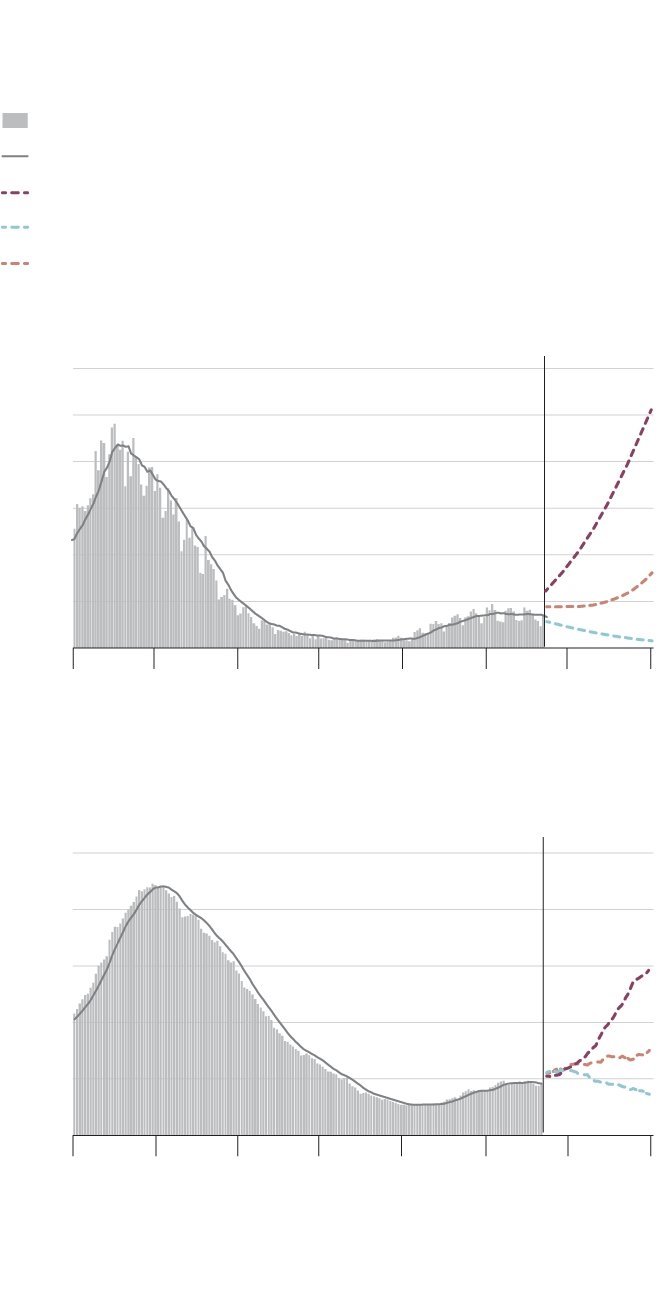 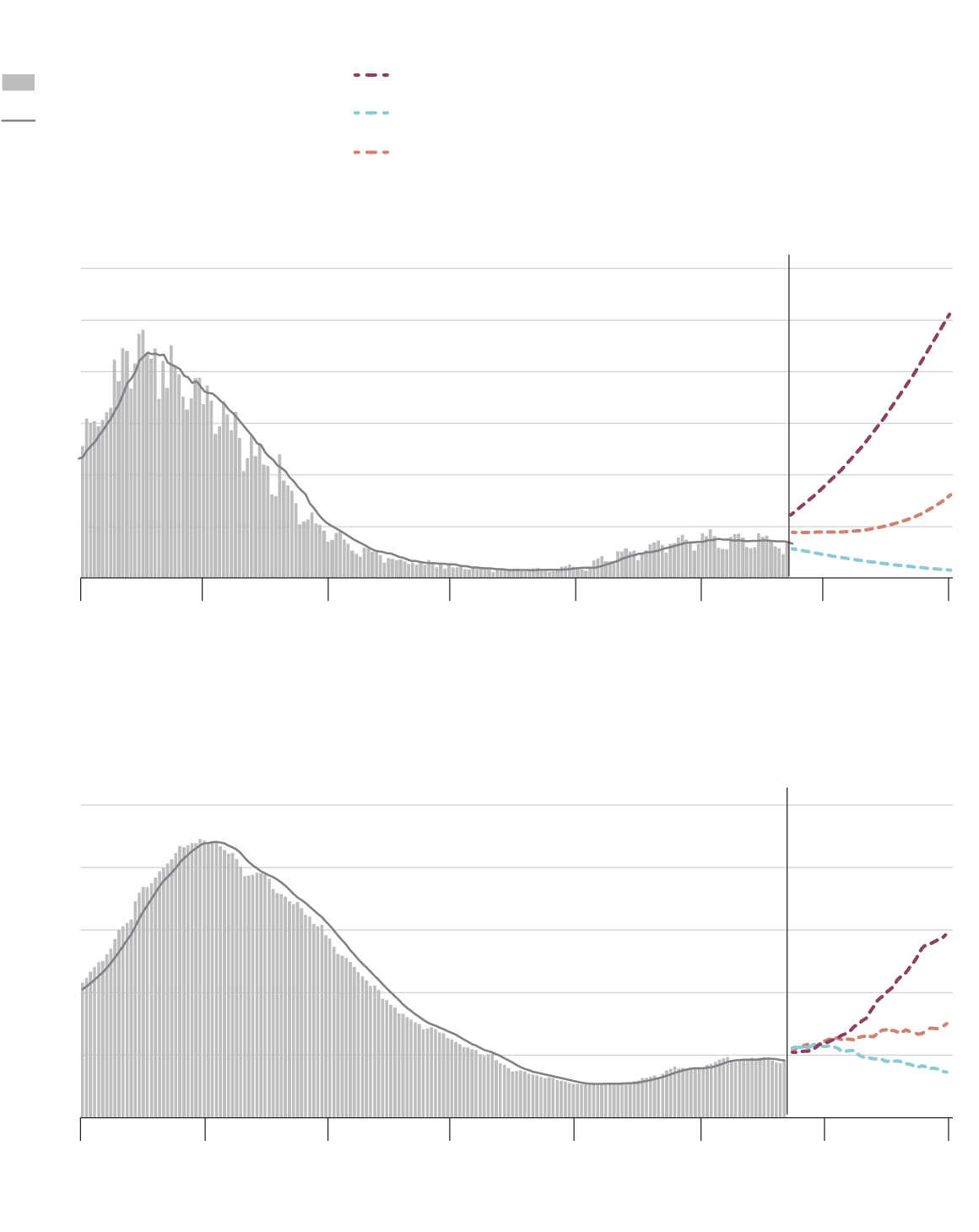 Projections for the number of COVID-19 patients in the province’s intensive-care units also vary from less than 200 to more than 300 people by the end of October. On Tuesday, 315 people were reported to be in Ontario hospitals with the virus, with 180 in ICUs with COVID-related illness.

While the fourth wave of the virus is flattening in Ontario, cases among children under 12 are going up, particularly in those aged 5 to 11, who are not yet eligible for vaccination. It is too early to see the impact of increased contacts and a return to school and work, Tuesday’s science table document says.

The Ontario NDP called for the province to do more to protect children, including making classes smaller, implementing mandatory vaccinations for education workers, increasing the availability of rapid testing, and adding the COVID-19 vaccine to the list of required immunizations for eligible students. Ontario Liberal Leader Steven Del Duca also called for the province to send more rapid tests to schools.

The projections also warn of a condition known as long COVID. The modelling says about 1 in 10 people who’ve had COVID-19 will experience symptoms that last longer than 12 weeks.

Previously, the science table warned that to avoid another lockdown, vaccination rates must “accelerate substantially” beyond 85 per cent of eligible Ontarians, with pandemic rules on masking, physical distancing, working from home and proof-of-vaccination certificates in place.

Alexandra Hilkene, a spokeswoman for Health Minister Christine Elliott, said in an e-mail that the numbers vindicate the “extremely cautious approach” Ontario has taken by keeping masking and other public-health rules in place.

She said the province’s new vaccine certificate rules will “help protect the province’s hard-fought progress” and that Ontario “will maintain our cautious approach and continue to make decisions based on the best medical and scientific advice.”