Connections between the Ontario Premier’s office and the newly appointed commissioner of the Ontario Provincial Police include a real estate deal with one of Doug Ford’s closest advisers.

Land records show that Ron Taverner, a Toronto Police Service Superintendent and Ford family friend who has known the Premier for years, purchased a half-million-dollar home from Simone Daniels, Mr. Ford’s deputy chief of staff for human resources. Ms. Daniels worked for Mr. Ford when he was a Toronto city councillor and is a former employee of Mr. Ford’s family company, Deco Labels.

Opposition critics have raised concerns about the closeness of Mr. Ford and Supt. Taverner’s relationship since the 50-year veteran of the Toronto Police Service was named as the new head of the OPP, beginning Dec. 17. The OPP is typically the police service that is called in if there is a criminal investigation of the provincial government.

Mr. Ford has said he had nothing to do with the selection of Supt. Taverner for the role, saying it was made by an independent panel that included Supt. Taverner’s former boss.

Responding to questions from the NDP about the house sale in the Ontario legislature on Thursday, Community Safety and Correctional Minister Sylvia Jones defended Supt. Taverner’s appointment.

“I hope, when Ron Taverner becomes the OPP commissioner on December 17, the NDP will finally do what everyone else in this province understands who knows him and congratulate him and thank him for his service,” she said.

No one answered the door at the house on Thursday morning. Property records show Supt. Taverner owns other properties in Barrie and Wasaga Beach.

Records state that the Etobicoke property was originally purchased by Sherry Lee Daniel, believed to be Simone’s mother, in 2006 for $206,000, with her daughter added to the title in April, 2012. (The surname Daniel is believed to be a typo, the correct name being Daniels.) The property was then transferred to Simone solely in June, 2015.

The house did not appear on the real estate industry’s Multiple Listings Service in 2017, which means it could have changed hands in a private sale. The lawyer who represented Simone Daniels in the transaction declined to comment. The lawyer acting for Supt. Taverner did not immediately return messages.

The last time the Old Weston Village property appeared for sale on MLS was in June, 2010, when it was listed for $275,000. At that time, the Tudor-style brick and stucco house was advertised as having two plus one bedrooms and two bathrooms. The listing highlighted the home’s hardwood floors, leaded-glass windows and convenient highway access.

Mr. Ford has praised Supt. Taverner’s credentials and described him as the right leader for the provincial police service.

The Globe and Mail has confirmed that, several years ago, Mr. Ford showed interest in Supt. Taverner’s career advancement.

Alok Mukherjee, who chaired the Toronto Police Services Board for a decade before he stepped down in 2015, recalled that Mr. Ford – who was a city councillor at the time – suggested he promote Supt. Taverner to deputy chief. Supt. Taverner did not apply for the role and did not get the job.

The website iPolitics revealed this week that the OPP job posting was changed two days after it was initially posted in October, removing rank requirements that would have made it impossible for Supt. Taverner, a mid-level commanding officer, to apply for the position.

“There is yet another piece of evidence about how close Mr. Ford is with Mr. Taverner,” she told reporters at Queen’s Park on Thursday.

“It’s the Premier’s integrity that’s at question here. He should know that this is inappropriate, he should admit that a mistake was made, and he should ensure that Mr. Taverner does not take that position. Because there should never be a situation in Ontario where people would be put in a position to have to question whether or not the OPP is behaving independently.”

With a report from Molly Hayes and research by Stephanie Chambers 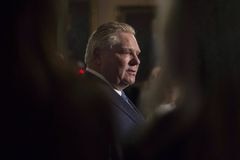 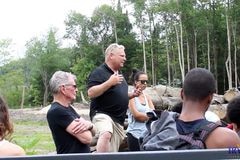