As the only nurse at a hospice for patients with HIV and AIDS, Kathy Malbeuf knows heartbreak. But she’ll never forget the moment when child-welfare officials informed a mother that they were taking her second baby into foster care.

The woman, who has had HIV since she was a teen, was trying to manage her substance use, take her medication on schedule and be a good caregiver. In the end, it wasn’t enough.

“I saw the struggles, and I saw her work hard,” Ms. Malbeuf said, “When the decision was made, it was just utter devastation.”

Ms. Malbeuf works at Sanctum, a non-profit hospice and care home for people with HIV in Saskatoon. She says the woman’s situation isn’t uncommon.

Between 2011 and 2016, 165 women living with HIV gave birth in Saskatchewan, three to babies with the virus. Few support services are available to these women during pregnancy, many of whom are also affected by homelessness, poverty, poor mental-health conditions and abuse. Saskatoon’s Westside Community Clinic, which cared for 61 pregnant women with HIV between 2007 and 2016, shows that 31 of the babies born were apprehended by child services and 15 others were placed in the care of family.

In September, a prenatal home that will provide integrated care for pregnant women with HIV called Sanctum 1.5 will open in Saskatoon, which organizers say is the first of its kind in Canada. The communal living facility, which is the latest initiative by Sanctum Care Group to cope with Saskatchewan’s high HIV rates, will house pregnant women from across the province. The building includes 10 bedrooms, along with spaces for women to receive medical care and social support for up to three months postpartum.

“I wish I had that opportunity – my children probably would have been home with me,” said one woman who is receiving care at Sanctum and cannot be named because her child is in foster care. “I think it will help a lot of women out, because there’s a lot of women that really need it.”

The move comes at a time when Saskatchewan is grappling with an HIV/AIDS epidemic that is unprecedented in Canada. The province’s current HIV diagnosis rates are double the national average, with 14.5 cases per 100,000 people.

One of the fastest-growing groups is young women. In 2016, the most recent data available shows a spike of 170 new HIV diagnoses, with an additional 25 AIDS cases; the majority live in rural communities and self-identify as Indigenous. Of those cases, 75 are women who are mostly between the childbearing ages of 15 and 45. Within the same year, 44 women with HIV gave birth, the highest number on record for the province.

Katelyn Roberts, co-founder and executive director of Sanctum Care Group, said she saw the need for a place such as Sanctum 1.5 when she watched as the health-care and child-welfare systems failed the women she worked with when she was an HIV case manager. “If we can provide housing and the right support, we can make really impactful change. Not just on the medical conditions of the people we serve, but on their social circumstances as well,” she said.

Since Sanctum opened in 2015 with 10 beds, Ms. Roberts said she’s had to refuse a number of pregnant women because she knew that if they were accepted, the space would quickly turn into a prenatal-care home. Compared to Sanctum, the new space will better accommodate expectant mothers.

Unlike other programs, Sanctum 1.5 will assist women who are engaging in high-risk or chaotic lifestyle behaviours, such as those working in the sex trade or actively using drugs. The initial goal will be to ensure that these women are taking their HIV medication to reduce the risk of passing the virus to the unborn baby.

A nurse practitioner will oversee mothers and their medications, with other medical care provided by local clinics and hospitals. During their stay, the women will have access to social-support services including addiction, parenting and lifestyle assistance. Social workers will help women who want to parent navigate child services and provide alternative options for those who don’t. Indigenous staff members and care methods will be available to accommodate women who self-identify as Indigenous.

“Another innovative part of Sanctum 1.5 is taking mom and baby home together after the birthing process,” Ms. Roberts said. Many women with HIV tend to have substance-abuse disorders, with Westside Clinic reporting that of the 18 babies born to women with HIV in 2017, 13 were treated for substance-withdrawal symptoms, also known as neonatal abstinence syndrome (NAS). When treating NAS, most facilities separate the baby from the mother to treat the infant in an intensive-care unit.

But research suggests that keeping mother and baby together so they can maintain physical contact actually reduces the baby’s withdrawal symptoms and the amount of treatment the child requires. Sanctum 1.5 is making this method of care, known as “rooming-in,” a priority for its women.

Registered midwife Jay MacGillivray, a co-founder of the Positive Pregnancy Program that supports pregnant women living with HIV at St. Michael’s Hospital in Toronto, said she was thrilled to hear that rooming-in would be integrated into the care Sanctum 1.5 will be providing.

“If you have the clinical expertise mixed with the parental expertise in an environment that is safe, then we know that children do better,” Ms. MacGillivray said, adding that Sanctum 1.5 is leading the way for how health-care facilities across the country should be operating.

“Sanctum 1.5 is essential; it has a new take on doing things – it uses harm reduction, it recognizes the role of homelessness and poverty,” Ms. MacGillivray said. “Instead of treating somebody simply as somebody living with HIV, they’re looking at those complex needs.”

To continue to support the women’s needs, Sanctum 1.5 is partnering with resources in the community that will be available to the women upon discharge. Options for women to enter trauma therapy or receive a mentor family to assist them are services Ms. Roberts hopes to offer.

Above all else, Ms. Roberts and Ms. Malbeuf emphasize that Sanctum 1.5 is a home, one that may be the first safe space for most of the women.

“Women are afraid, they’re afraid to enter into care for a variety of reasons and oftentimes it’s because of past experience,” Ms. Malbeuf said. “Sanctum 1.5 will be different, it’ll be steeped in harm reduction, steeped in the holistic approach, working with moms for what they want, not what we want.”

All kids should get vaccinated for hepatitis B at birth, experts say
June 15, 2018 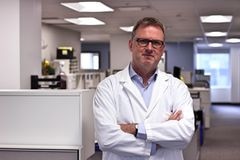