A new paper by Toronto researchers says smartphones and social media are likely contributing to a rise in self-harm and mental distress among children and teens, the latest finding in the debate over whether excessive screen time is harming young people.

In the paper, published in the CMAJ on Monday, a research team led by the Hospital for Sick Children reviewed numerous existing studies on the link between young people’s digital activity and mental-health issues, including mental distress, self-harm and suicidality. While a causal relationship has been difficult to prove, the researchers concluded there is enough evidence for clinicians, parents and schools to help curb excessive use of smartphones and social media.

“I don’t think we can continue to ignore it and say, ‘Oh, we need more evidence; it’s not clear,’” said lead author Elia Abi-Jaoude, staff psychiatrist at SickKids. “Social media and smartphone use is not all bad. But I think we do need to pay attention to this issue as likely an important contributor to what we’re seeing in our youth these days.”

At his own hospital, Dr. Abi-Jaoude said, he and his colleagues have seen an increase, particularly over the past five years, in young patients with self-harming behaviours, suicidal ideation and suicide attempts, reflecting a wider trend. In Canada, the rates of hospital emergency-department visits among five- to 24-year-olds with mental disorders increased by 45 per cent from 2006-07 to 2013-14, according to the Canadian Institute for Health Information. In-patient hospitalizations rose 37 per cent.

Dr. Abi-Jaoude said he and his team were interested in exploring why. Their paper cites more than 60 studies and reports, including many cross-sectional surveys on young people’s digital-media use. He noted the researchers also looked at several longitudinal and empirical studies, which, he said, showed a temporal relationship – that is, participants’ exposure to smartphones and social media preceded their mental distress and issues, such as distraction and lower self-esteem.

Although the researchers emphasized they do not advocate prohibiting the use of smartphones and social media, their recommendations included having clinicians talk to young patients about reducing their use of the technology, encouraging parents to set boundaries and limit the time children spend on their gadgets if they surpassed one to two hours on them daily, and instituting limits in schools.

By contrast, other researchers studying the impact of digital media have found the effects of these technologies on mental health – whether positive or negative – are small and inconsistent.

“There are no strong overall effects. There certainly is not enough information to make any kind of causal claims in my view,” said psychologist Jeff Hancock, founding director of the Stanford Social Media Lab, who performed a recent, yet-to-be-published meta-analysis of 226 studies, involving hundreds of thousands of participants.

Similarly, a separate review published in The Journal of Child Psychology and Psychiatry in January, found existing studies "have not been sufficient to support causal claims nor do they warrant the widespread panic related to smartphones, social media and adolescent mental health.”

Dr. Hancock, a professor in the department of communication at Stanford University, said he worried that emphasizing the studies that show only small negative effects of digital media may contribute to this "anxiety and hysteria around social media.”

For instance, if people get the message that social media is bad for them, he said, “when I do use it – because I’m going to; it’s such an important part of many things in life – I’m going to feel bad about myself because I was weak ... and I probably am a weak and bad person.”

While he encourages parents to talk to their children about how to appropriately use their gadgets, he said the use of digital devices tends to be what people automatically assume is behind young people’s anxieties and distress because it’s salient. Young people face a number of potential stressors, such as rising income inequality, fears about climate change or increasing levels of student debt, he said.

“But they’re invisible. They’re not like a phone in your hand,” he said.

Back in Toronto, Dr. Abi-Jaoude said he agrees there are likely other social factors behind the increasing rates of mental distress among young people. So simply asking young people to turn off their cellphones won’t solve everything. However, there’s enough evidence to suggest that digital media plays an important role, so clinicians, parents and schools should work to address problematic use. “I think the data we do have, overall, it’s pretty convincing.” 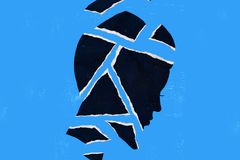