Sakineh Balouch and her 10-year-old son, Arshia Gholezadeh, are supposed to be out of their east Toronto apartment by March 31, and they fear their next home will be a shelter.

Their basement apartment smells wet, has a window that doesn’t open and they can hear mice scratching through the walls at night, but it’s $1,400 a month – all Ms. Balouch can afford on a fixed income of $1,500 a month. She gets her groceries at the food bank and cannot scrounge together the cash to replace her son’s hole-ridden shoes, which make his feet wet when he walks to school. All the other apartments she’s seen are even more expensive than this one.

With a vacancy rate that hovers around 1 per cent and rents that have skyrocketed in the past five years, Toronto’s housing crisis has had an outsized effect on newcomers, particularly refugees, who the city identifies as some of its most vulnerable residents.

Settlement agencies say the crisis has left their clients stuck in crowded, poorly maintained units or, in the most extreme situations, out on the street. Families seeking subsidized housing face waiting lists that can be more than a decade long.

Before she arrived, Ms. Balouch heard Canada had a reputation as a world leader in providing support and housing for refugees. In 2018, it accepted 28,100 refugees –more than any other country in the world. But if she knew life would be so hard here, she “would’ve stayed in Turkey or gone back to Afghanistan and risked getting killed,” she said through an interpreter.

Her experience is common: A report published last fall by the Migration Policy Institute found that many refugees who arrived from 2015 to 2016 received little predeparture training on life in Canada and “were unprepared for the extremely high rents and limited housing choices they would face.”

How refugee families pay for rent in Toronto

Assistance figures are for a family of four, including two children under six who would receive the maximum amount under the Canada Child Benefit

In their first year, government-assisted refugees receive funds to cover their most basic costs – shelter and food – and private sponsors provide refugees with similar support. In Ontario, a couple with two children would receive $1,250 a month and would be eligible for a bonus housing supplement of $200. But that funding doesn’t go far: The average rent in the Greater Toronto Area for recently leased and available units at the end of 2019′s third quarter was $2,515, according to real estate consulting firm Urbanation. After that first year, some find work or transition to welfare. Many families rely on the child tax benefit just to pay rent.

It used to be that when refugees arrived in the offices of Newcomer Women’s Services, staff would call up one of 10 landlords they routinely worked with to set them up with an apartment in a high rise with reasonable rent and populated by many other immigrants. But demand means landlords don’t need them anymore.

“We have clients who feel it’s really a hopeless situation – there’s nothing within their budget," said Judy Fantham, executive director of the organization. “Some people are left waiting for social housing in shelters.”

In 2014, a three-bedroom unit in a high rise in Toronto’s Flemingdon Park neighbourhood – a popular landing spot for immigrants – rented for $1,310 a month, according to archived pages from the building’s website. Now, a three-bedroom unit goes for $2,300 – a 76-per-cent increase in just five years.

Sigmund Lee, accounting manager and operations administrator for Gateway Properties, which owns that building, says turnover has been extremely low in the past few years, but when a unit becomes available, his company scopes out what other buildings are charging for similar units and sets prices accordingly.

“Well, it’s market, right? We are not trendsetters, right? We can’t go out and ask for a lot of money,” he said.

Adeena Niazi, the executive director of Afghan Women’s Organization, said the high cost of housing has contributed to a failure to launch for many of her clients. Instead of focusing on their education, teenagers are picking up part-time jobs to help their parents pay rent. Instead of taking English classes to aid in integration, adults are turning to precarious shift work.

In late December, the provincial and federal governments announced a housing benefit deal that would provide annual subsidies of up $2,500 to help low-income individuals and families in Ontario better afford rent. But settlement workers, housing advocates and economists dismiss these kinds of fixes as Band-Aid solutions.

In a July, 2019, housing report, David Macdonald, a senior economist with the Canadian Centre for Policy Alternatives, wrote, “In the long term, rental subsidies are no substitute for the construction of new affordable housing, which would increase vacancy rates, cool rental prices and allow more people to live closer to where they work.”

In December, Toronto city council approved a 10-year housing plan, which, among other things, proposes the construction of 40,000 new affordable rental homes. While the city has committed $8.5-billion to the plan, it is still waiting for an additional $14.9-billion from the province and Ottawa to carry it out.

Six years after arriving in Canada as a refugee from Afghanistan, Mohammad Zahir Amiri was offered a tiny subsidized bachelor apartment for $115 a month. Five years later he’s still there, but now with a wife, toddler and baby. He can’t afford a market-rent upgrade and has been told it’ll be another seven or eight years before he can get a bigger subsidized unit.

Mohamad Khalil Aldroubi, a Syrian refugee who lives in a three-bedroom apartment in Toronto’s Thorncliffe Park neighbourhood, has contemplated moving his family of seven out of the city to escape the housing crisis. But there are trade-offs to consider: reduced transit, fewer job opportunities and limited access to the settlement services his family has come to rely on.

There is also the question of fitting in. On a summer trip to a city a few hours north of Toronto, Mr. Aldroubi noticed others staring uncomfortably at his wife and daughter, the only women in the vicinity wearing hijabs. Friends have advised against the move, warning they might be the only Muslims in their new home.

“I’m scared when people tell me that," Mr. Aldroubi said. “I don’t know where can I go.” 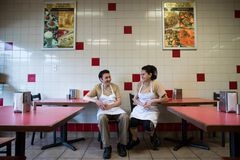 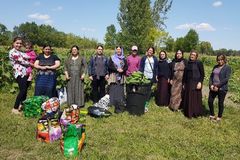