In the iconic photograph American Girl in Italy, Ninalee Allen, a lone woman on a Florentine sidewalk is ogled and leered at by men of varying vintage. One of them appears to be grabbing his crotch, while leaning in with a kissy face. Stoically, with chin up and lidded eyes cast down, the 23-year-old beauty looks neither left nor right. She grasps her shawl and handbag and strides through the gauntlet, but her Pre-Raphaelite face looks like it might be seconds from bursting into tears.

The image brings to mind the words of the author of On Photography, Susan Sontag, who theorized that to take a picture “is to participate in another person’s mortality, vulnerability, mutability, precisely by slicing out this moment and freezing it.”

The moment was indeed frozen, but its meaning was a source of heated speculation. One prevailing interpretation of the scene – that it depicted the harrowing sexual harassment of a young woman – was refuted by the photo’s subject. Ms. Craig, as she was known after taking her second husband’s name, said she was having a blast and couldn’t have cared less about the hooting. She even defended the men in the decades of fervid debate that followed about whether she had been sexually harassed.

“In my history with the picture,” she told The Globe and Mail in 2011, “many women resent the image. They think it’s insulting. They think I couldn’t walk down the street without being bothered. But I call it being appreciated. I wasn’t being harassed.”

With a flourish, she added: “I’m totally contained. I’m self-assured. I own the street. I’m walking in total confidence. I’m not in the least flustered or bothered or apprehensive.”

As for that expression on her face, Ms. Craig explained that she had been imagining herself as the noble Beatrice from one of her favourite books, Dante’s Divine Comedy.

Ms. Craig died on May 2 in Toronto of complications from lung cancer. She was 90.

The photo dates back to August, 1951, when she had quit her job as a nursery school teacher in Manhattan to tour Europe alone, something women rarely did at the time. She was staying at the $1-a-night Hotel Berchielli in Florence, as was fellow American Ruth Orkin, a 29-year-old freelance photojournalist.

Ms. Orkin “asked if she could take my picture,” Ms. Craig wrote a few years ago in The Guardian, for a feature called “That’s Me in the Picture,” about people in iconic images. “She said, ‘If I get it into The Herald Tribune, I get $15,’ and I thought that sounded like fun.”

The young American woman, whose nickname was Jinx, “was beautiful, luminescent and, unlike me, very tall,” the photographer later told The New York Times. Ms. Allen agreed to the shoot.

The next morning, the pair meandered to the Piazza della Repubblica. As Smithsonian Magazine put it in its 2011 dissection of the scene, Jinx “wore a long skirt – the so-called ‘New Look’ introduced by Christian Dior in 1947 was in full swing – with an orange Mexican rebozo over her shoulder, and she carried a horse’s feed bag as a purse.”

Once in the square, in front of the Caffè Gigli, the men took notice. When Ms. Orkin saw their reaction, she pressed the shutter. Then she asked her new friend to retrace her steps, and clicked again.

The second shot didn’t make the Herald Tribune but it was published for the first time in the September, 1952, issue of Cosmopolitan magazine for a story on travel tips for young women.

Over the years, Ms. Orkin’s famous image fired up discussion over photography’s sometimes troubling relationship with truth. As the Smithsonian and others have wondered, was the event she captured “real”? Or was it a piece of theatre staged by the photographer?

“That picture was not posed,” she insisted. “It was not set up. That’s why people relate to it. I was walking along the street at 10:30 in the morning on the hottest day of the year. Ruth was ahead of me. She turned around and saw it. One snap. ‘Jinx, go back and walk that again.’ Thirty seconds. Took it again. Then we went on.”

The only other instruction Ms. Orkin had was for the man on the Vespa: She asked him to tell the other men not to look at the camera. Photos taken moments later show Ms. Allen going for a scooter ride with the beaming Vespa rider.

Despite Ms. Craig’s claims of the picture’s purely innocent connotations, the image “continues to elicit shudders from women who’ve been the recipient of unwanted attention, an issue especially relevant in light of today’s #MeToo movement,” said Toronto art historian Barbara Isherwood. That some staging took place “also places this image within contemporary discourse around the thorny subject of what constitutes truth in photography.”

For Ms. Craig’s nephew, Brooks Walker, a professional photographer who uses the image when teaching, the staging aspect falls into “a gray area. But none of the people were posed or set up. The scene is authentic.”

Mr. Walker also related that his aunt recently told him that the picture was “not part of the #MeToo movement at all.”

As for the guy touching himself, “I was used to it,” Ms. Craig wrote in The Guardian. “It was almost like a good luck sign for the Italian man, making sure the family jewels were intact.” Even so, for years afterward, in reproductions of the image, the man apparently grabbing his crotch to the left of her was often cropped or airbrushed out of the frame.

But not in Italy, where the picture was a staple of men’s rooms in bars and restaurants. “Italian males look at it and they laugh, they grin, they say, ‘That’s us.’ These are spoiled Italian men, just hanging around at 10:30 in the morning,” Ms. Craig told The Globe. But, she stressed, “you also have to remember that this was 1951, just [six] years after the war, a hungry time in Italy. Most of these men didn’t have jobs.”

I’m self-assured. I own the street. I’m walking in total confidence. I’m not in the least flustered or bothered or apprehensive.

For Stephen Bulger, whose eponymous Toronto art gallery displayed the photograph on its 60th anniversary, the spontaneity and joy that led to its creation were characteristic of Ms. Craig.

“She was a real force,” he said. “Most people said they never met anyone quite like her. And in her case, that’s completely apt. She enjoyed everything, was always engaged and remained curious. That attitude stayed with her for her entire life.”

Ninalee Allen was born in Indianapolis on Nov. 6, 1927. Her father, William Allen, was the personnel director for a department store and her mother, Mary Church, was a homemaker. She studied art history at Sarah Lawrence College before setting off on her European adventures. Upon her return, she settled in New York City, where she became a copywriter at the J. Walter Thompson advertising agency and later at the William Esty agency.

In 1959, she married Achille Passi, a widowed Venetian count, and they lived in Milan for a decade. After a divorce in the early 1970s, Ms. Allen returned to New York and met Robert Ross Craig, a Canadian steel executive with Dofasco in Hamilton.

They were married in 1978 and lived on a farm in Campbellville, Ont., and in Burlington, Ont., until his death in 1996. Two years later, she moved to Toronto and became an arts patron with a special interest in the Canadian Opera Company. She was also an inveterate collector of Inuit art, baby rattles and contemporary Chinese pieces, among other objets d’art.

In a wild coincidence, the man straddling the Vespa in the picture happened to be a count named Carlo Marchi, and was a distant cousin to Count Passi. Years later, Mr. Craig met Count Marchi – both were in the steel business – and when the photograph came up in conversation, the count proudly proclaimed, “that was me on the motorcycle.” Mr. Craig indignantly replied, “that’s my wife.”

Ms. Craig leaves her stepson Alex Passi, as well three other stepchildren from her second marriage, 11 grandchildren and 10 great-grandchildren. Ms. Orkin, who stayed friends with her, died in 1985.

“I wouldn’t say the picture has changed my life but I’ve had so much amusement from it over the years,” she wrote in The Guardian. “And more free meals at Italian restaurants than you’ll ever know.”

Ms. Craig felt the need to weigh in on the controversy one last time in 2014, when Barbara McDougall, a former federal minister responsible for the status of women, took to these pages to decry American Girl in Italy’s “sinister quality” and hold it up as an example of “the centuries old dilemma of flirtation, occasionally evolving into harassment, too often into assault, and in extreme circumstances, into tragedy.”

Ms. Craig was having none of it. Three days later, she wrote the paper to repeat that she’d felt “totally self-assured and not threatened in the least that day.

“I was young, free and having the time of my life.”

A snapshot of sexism or a portrait of composure?
May 3, 2018 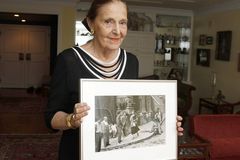