A prominent conservation group is calling on Newfoundland and Labrador’s government to restart its environmental assessment of a planned aquaculture expansion, after more than two million salmon recently died in the same company’s pens.

But the Atlantic Salmon Federation says that the province’s initial assessment did not consider what happens when the proposed 2.2 million hatched salmon are transferred to the company’s existing enclosures.

Steve Sutton, the federation’s director of community engagement, told a news conference Thursday that those cages include facilities on the island’s south coast, where 2.6 million fish died last month.

The company has attributed those deaths to a long period of high water temperatures.

Provincial Environment Minister Derrick Bragg should restart the environmental assessment before the matter goes to court next month in a challenge brought by conservation groups, Mr. Sutton said.

“Given recent events, it is unconscionable that the provincial government and Mowi will go to court next month [and] spend taxpayer dollars to argue that the company should be allowed to put more fish in the sea cages without any environmental assessment,” he said.

The lawsuit is being led by the environmental law charity EcoJustice on behalf of several environmental groups and individuals, arguing it was unlawful for the minister to release the project from further environmental assessment.

Northern Harvest and its open-net aquaculture practices have been scrutinized over the past month as images of salmon residue being dumped into the ocean have surfaced during the cleanup of the dead fish.

The company has also been criticized for being slow to release information about the incident. While it reported the die-off to the province on Sept. 3, the public was not made aware until weeks later.

The province suspended the company’s licences at affected sea cages last week, saying Northern Harvest had not reported a second mass die-off of 600,000 salmon after the first two million.

Just under half of all Northern Harvest’s fish were killed in total, according to its managing director.

The messy cleanup has raised concerns about the regulation of the fast-growing industry.

Don Ivany, director of programs with the Atlantic Salmon Federation, spent a week touring the waters on Newfoundland’s south coast water to assess the effects of the die-off.

“What hit us the most was just the sheer magnitude and scale of the disaster,” he said, describing a thick layer of rotten fish beneath the boat he was travelling on, the “rancid” material coming to the surface with each turn of the propeller.

“Every beach that we saw, anywhere near any of the farms or cages, was covered in about six inches of fat and rotten fish material. There was lots of fish fat and stuff floating on the surface in every site that we saw.”

Ivany said he saw live fish jumping from the cages that had been weighed down by dead fish carcasses.

Studies have shown that escaped salmon from fish farms have reproduced with wild salmon, altering the wild population’s genetic makeup.

Industry supporters have argued that changes to the province’s aquaculture regulations would prevent similar incidents from happening in the future.

The turnout at Thursday’s media event highlighted some of the political tension surrounding the aquaculture industry in Newfoundland and Labrador.

Mark Lane, executive director of the Newfoundland Aquaculture Industries Association, was on site to defend the industry, denying that companies would intentionally do harm to the environment.

Mr. Sutton said while the practice of open-net fish farming is undeniably risky, the province owes it to residents – especially those whose livelihoods depend on the industry – to confront those risks.

“Those cages are not coming out of the water any time soon,” he said. “We need to accept that and we need to be doing everything we can to make them environmentally sustainable.” 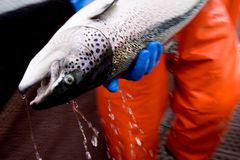 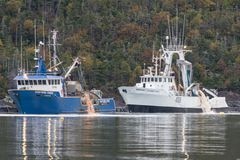