Newfoundland and Labrador’s premier says he has ordered a review of transfers of executive-level staff as one of his cabinet ministers faces scrutiny over the appointment of a former Liberal staffer to a lucrative public service job.

A report released Monday found Christopher Mitchelmore “grossly mismanaged” his code of conduct obligations when he directed Carla Foote’s hiring to a marketing job at Crown corporation The Rooms, a gallery and archive in St. John’s.

The Office of the Citizens’ Representative, a provincial ombudsman service, said Mitchelmore mismanaged public funds by dictating Foote’s hiring and signing off on increasing the job’s salary to $132,000.

Foote had previously worked for the Liberal party under Premier Dwight Ball and is the daughter of provincial lieutenant-governor Judy Foote.

In the provincial legislature on Tuesday, Ball defended Mitchelmore and Foote while leaders of the Progressive Conservative and New Democratic parties asked if he would fire the minister.

The premier also repeatedly denied allegations in the report that Ball himself reportedly offered Foote the job for which she did not submit a resume.

“I did not order Mr. Mitchelmore to hire Ms. Foote,” he said. “I wasn’t involved in that at all.”

Opposition Leader Ches Crosbie of the Progressive Conservatives pressed the premier on contradictions between his statements the report’s findings.

Members of the Rooms board’s executive committee told investigators they felt compelled to accept Foote’s appointment because they were informed that Ball had already offered her the position – a claim the premier denied Tuesday as “hearsay.”

Ball praised Foote’s qualifications and said she was doing well in her job at The Rooms when asked if she would be removed from the post to allow for a fair competition.

“We’re having this discussion today simply because of who she is and because she worked with me, which is extremely unfair,” Ball said.

The report tabled Monday found “no evidence” that Foote’s qualifications were assessed against the 77 other candidates who applied for the position.

“It is impossible to conclude that she was the best qualified person for the position,” the report said.

Mitchelmore and Ball have defended Foote’s hiring as a “lateral move” between executive positions, but the report concluded the positions were not equivalent and the job was reclassified to an executive level to accommodate her.

The premier repeated that defence on Tuesday, responding to questions directed at Mitchelmore as the minister sat silently behind him in the House of Assembly.

Ball said Mitchelmore has become a “poster person” for a practice of executive transfers that’s existed for decades. He said the pending independent review of executive job movements would address “areas of concern” within an otherwise positive practice.

The report tabled Monday concluded that Foote’s hiring was not in accordance with the Public Service Commission Act and recommended corrective action against Mitchelmore. The commissioner for legislative standards has also recommended the minister be reprimanded.

A brief written statement from Mitchelmore issued on Monday said he would apologize in the House of Assembly and offered no further comment. 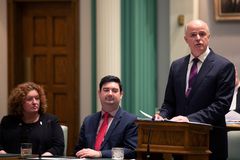