Jennille Seedial was 23 when she was raped by someone she knew.

She went to the hospital, was handed a pamphlet about sexual assault and left several hours later, feeling confused about what had happened and where to turn.

Ms. Seedial called many service agencies, each with a waiting list that stretched on for months. She couldn’t afford paid therapy. More than a year after her assault, after six months on a waiting list, she finally connected with the Toronto Rape Crisis Centre [TRCC], where she received free counselling.

“I didn’t think I’d get to 30 [years-old] … Being in that place of feeling like the system really didn’t care, and not having community, not having family that understood," Ms. Seedial said.

The TRCC and Ontario’s 41 other sexual-assault centres are a lifeline to scores of people such as Ms. Seedial. But the centres are under pressure as heightened awareness around sexual assault has increased demand for their help. Waiting times for free services in Ontario can stretch on for months or even years. Without additional government funding, the centres say their waiting lists will grow.

The centres were set to receive an additional 30 per cent in funding promised under the previous Ontario Liberal government – up to $14.8-million over three years – but after the Liberals lost the 2018 election, the money never materialized. Instead, the Progressive Conservatives under former attorney-general Caroline Mulroney pledged an additional $1-million in one-time funding for all the centres last February. The money will run out on March 31, and advocates say at the very least, it should be renewed on an annual basis.

Deb Singh, a counsellor and advocate at the TRCC, and fellow advocate Nicole Pietsch are scheduled to meet with Attorney-General Doug Downey on Thursday to ask the government to commit to the additional $1-million in funding annually, as well as a promise not to eliminate or amalgamate any existing centres across Ontario.

“We remain hopeful that the $1-million will be renewed," Ms. Pietsch said.

The TRCC’s share of the $1-million was about $76,000 last year, Ms. Singh said. While limited, it was enough to hire two counsellors and holistic worker on a part-time contract. In recent years, the centre has experienced higher demand as a result of allegations against Hollywood mogul Harvey Weinstein that sparked the #MeToo movement encouraging women to speak out about sexual assault, Ms. Singh said. In October, 2018, the waiting list for services was 18 months.

“We’ve really been able to enhance our front-line service provision in the centre. We were able to run more support groups, we were able to cut the list down from 18 months to six months, in a less than 10-month period," said Ms. Singh, who also chairs the Ontario Coalition of Rape Crisis Centres [OCRCC].

“We need more bodies in here because no one should be on a wait-list after they’ve experienced sexual assault or rape or intimate partner violence. No one in Ontario should have to wait.”

In total, the centre – which runs a crisis line and also offers workshops and other services – receives about $540,000 in provincial funding a year, Ms. Singh said. The previous Liberal government’s increase would have meant an additional $159,000 a year for three years.

When the extra funding runs out, “Our wait-list will go back up, because we don’t see a slow of people adding themselves to our wait lists for services,” Ms. Singh said.

Mr. Downey’s spokeswoman said the government is maintaining funding for the ministry’s $60-million victims services program, which includes the province’s sexual-assault centres. But the one-time $1-million funding was added “on an extraordinary basis in the wake of the unfunded promises made by the previous Liberal government on the eve of an election,” spokeswoman Jenessa Crognali said.

Ms. Crognali added that the previous Liberal government did not “support victims of crime in a sustainable manner.”

Ms. Pietsch said that centres across the province have used the one-time funding for various programs that cater to the specific needs of the community, such as mobile counselling or group sessions for rural areas.

“When March 31 comes, if there’s no renewal of those funds, those fantastic services will also come to an end," she said.

For Ms. Seedial, now in her late 20s, meeting Ms. Singh – who became one of her counsellors – was at a turning point in her life. She also got involved with a City of Toronto program that helped connect her with employment resources in the community. Now Ms. Seedial is a peer-support worker who wants to help others who have gone through similar experiences.

She stresses that healing can take years.

“If it wasn’t for these places, I wouldn’t have been able to get here," she said.

"Would I have ever gotten here?” 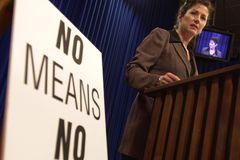