A major autism-service provider in Northern Ontario says it can no longer offer therapy to new families, and blamed the service cuts on the provincial government’s changes to autism funding.

Child and Community Resources (CCR), based in Sudbury, said in a statement on Tuesday that changes to the autism program announced by Premier Doug Ford’s government last year that cut thousands of dollars in funding for families transformed the “large multidisciplinary organization to a shell of our previous capacity.” About 90 positions at CCR have been lost over the past year, a third of them through layoffs because of funding changes, executive director Sherry Fournier said.

The centre said on Tuesday that it was unable to offer fee-for-service options as it did not have enough qualified staff. It had 1,200 children on a wait list for autism services.

“It was a reluctant step. This was not one that was taken lightly,” Ms. Fournier said on Tuesday.

The provincial government made changes to autism funding last year that saw families receive money based on their child’s age rather than the old Liberal-government program, which was based on the needs of a child. Former minister of children, community and social services Lisa MacLeod had said the government’s original plan, announced in February, would clear a backlog of 23,000 children awaiting treatment.

The government eventually backtracked, promising to double the programs’s budget to roughly $600-million. The new minister, Todd Smith, said a new needs-based funding arrangement would be rolled out by next spring.

Christine Wood, a spokeswoman for Mr. Smith, said in an e-mail statement on Tuesday that the government was “disappointed” with CCR’s decision to stop offering a fee-for-service option.

Ms. Wood said that the government provided another extension of up to six months for children who received therapy under the Liberal-government system, and an advisory panel is working to develop recommendations for a needs-based program.

However, the uncertainty around future changes and providing cheques for families with limited budgets for therapy has resulted in job losses and, as a result, diminishing services. In June, nearly 300 full-time positions were eliminated at the ErinoakKids Centre for Treatment and Development west of Toronto as a result of changes to the autism program.

Ms. Fournier said organizations in the north have difficulty recruiting board certified behaviour analysts and others who specialize in autism therapy. She said that her centre will now only be able to provide autism services to about 100 families who received extensions on their needs-based programs. CCR provides services for children across the north, including those in Sudbury, Algoma, Thunder Bay and Kenora.

“My worry has been from the start that the north will feel this first. And we are running out of time. If we wait much longer, we’re not going to have any staff at all,” Ms. Fournier said, adding that the government needs to provide some stability to the program.

Alina Cameron, who lives in Slate River, just outside of Thunder Bay, was worried when she learned that the wait list at CCR no longer existed. Her four-year-old had been waiting for funding since 2017.

“If I receive my cheque tomorrow … I would have nowhere to spend the money,” Ms. Cameron said.

Opposition NDP Leader Andrea Horwath said she would welcome another partner helping families who need services, when asked if the federal government should fund and be part of a national autism strategy. “It is horrifying to see what the Ford government did. And we still don’t know what the future brings," she said while attending the International Plowing Match in Verner, Ont. 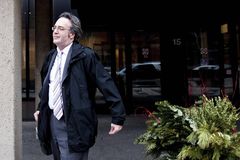