Over the two decades Sandra Margettie served as an elected school-board trustee in Nova Scotia, she wrestled with a budget, struggled with teacher layoffs and shuttered some schools. She also helped families to navigate the complexities of the education system.

It is emotional because, as of Saturday, it is over.

That is the day the provincial government will dissolve all seven of its English-language school boards, effectively removing school trustees such as Ms. Margettie from the system. And, in eliminating those positions, the province will also remove many women from local politics: In Nova Scotia, 55 per cent of school trustees – 57 of 104 – are women.

“The women are [being] ousted out. We fought to get to the table, and then they take the table away,” said Ms. Margettie, a former daycare worker who has been with the Cape Breton-Victoria Regional School Board for 22 years.

The reforms comes in the wake of a provincially-funded report, released in January, that was essentially a scathing condemnation of Nova Scotia’s school system. Education Minister Zach Churchill said the governance changes are necessary to strengthen the system and will result in better outcomes for the province’s 118,000 public-school students, who rank below the Canadian average in test scores for reading, science and math.

He said provincial policy was being implemented differently across boards and students outcomes, as a result, have been inconsistent from region to region.

“I can appreciate that concern [about women in school board member roles] and that argument against what we’re doing,” Mr. Churchill said in an interview this week. “I would also argue that more fundamental to our democracy is an education system that is providing optimal results for our students and future generations of citizens.”

The role of trustees has come under the microscope in recent years, especially as provincial governments have taken more control over curriculum, budgets and teacher contracts. Trustee boardrooms, meanwhile, have been plagued by ideological battles and personality conflicts and, sometimes, governments have had to intervene.

Still, others argue that trustees are strong advocates for their communities, hold governments accountable and are the link between school boards and families. Many women, including Ontario Premier Kathleen Wynne and B.C. Finance Minister Carole James, moved into municipal and provincial politics after being elected trustee.

In several provinces, more than half of the trustees are women, according to data from the Canadian School Boards Association, compared with only 27 per cent of elected MPs.

Patti Bacchus, the former chair of the Vancouver School Board and an education columnist for the Georgia Straight, said women have traditionally been more involved in school councils and then choose to take on a more official role. The office is sometimes used as a stepping stone to municipal or provincial politics, but more often those elected as trustees are passionate about public education, she said.

“I think it’s really important to build pathways and encourage women and people of colour to run for government and we do see as you get higher and higher that it has been a struggle to achieve equity,” Ms. Bacchus said. “Losing even the locally-elected school board is a loss for democracy, and it’s a loss for civic engagement.”

Pamela Lovelace, chair of Equal Voice Nova Scotia, said that in her province, while women make up more than half of school board members, they only represent 33 per cent of the politicians in legislature.

“We’re just looking at this loss ... as really quite staggering because it means that those women who have the opportunity to serve in a local capacity, learn about campaigning, what it means to put your name on a ballot and be involved as an elected official, they no longer have a school board as a stepping stone to other levels of government,” she said.

“It means that we have had a loss of voice at the decision making table. We have less opportunity to encourage women from diverse or marginalized backgrounds to get involved in politics,” she added.

The N.S. government is replacing elected school board members with an appointed advisory council. Mr. Churchill said the council will have appropriate gender representation, as well as members from the African Nova Scotian and Mi’kmaq communities.

That gives little comfort to Ms. Margettie, who said she was elected to represent her community and has been stripped of that position with little warning. (The province’s francophone school board, the Conseil scolaire acadien provincial, will retain its current structure.)

Boards had their final meetings this week and last. At Ms. Margettie’s board, it was a tearful farewell on Monday evening for the 16 board members. Each was given a certificate of appreciation. 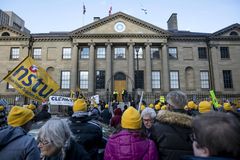