Exactly 21 years after the Supreme Court of Canada affirmed the right of Indigenous groups in Eastern Canada to hunt and fish for a moderate livelihood, a First Nation in Nova Scotia held a boisterous ceremony Thursday to issue five lobster licences to their own members.

But the scene was tense on the choppy waters of St. Marys Bay, just beyond the wharf in Saulnierville, where non-Indigenous fishermen upset with the move waited in a bobbing fleet of about 80 fishing boats.

A Canadian Coast Guard vessel was spotted offshore, but a federal spokeswoman later said there were no reports of violence on the water.

Some non-Indigenous fishermen in southwestern Nova Scotia say the Sipekne’katik First Nation has no right to launch its own, self-managed commercial fishery, mainly because the fishing season is now closed.

However, the First Nation’s chief, Michael Sack, said his band members were only exercising constitutional rights confirmed in the 1999 court ruling known as the Marshall decision.

The first to receive a licence was Randy Sack, son of the late Indigenous activist Donald Marshall Jr.

It was on Sept. 17, 1999 that the Supreme Court of Canada decided Marshall had a treaty right to fish for eels when and where he wanted – without a licence.

The Marshall decision also said the Mi’kmaq, Maliseet and Passamaquoddy bands in Eastern Canada could hunt, fish and gather to earn a “moderate livelihood,” though the court followed up with a clarification two months later, saying the treaty right was subject to federal regulation.

That additional ruling is at the crux of the argument being made by non-Indigenous fishermen, who say First Nations must abide by Ottawa’s conservation measures.

On Tuesday, hundreds of non-Indigenous fishermen gathered for protests at the wharfs in Saulnierville and nearby Weymouth. They’re demanding that Ottawa crack down on what they say is an illegal fishery.

Michael Sack said his First Nation has spent years drafting its lobster fishing management plan, which has its own set of conservation regulations.

“We have compliance officers and we’re going to regulate our own fisheries,” he told reporters as traps were loaded onto three fishing boats. “We’re not outside of any season. We don’t have a season.”

The chief said the band’s management plan has been submitted to the federal Fisheries Department for approval.

“We put a plan together, and we’re going to enforce our plan and have a successful moderate livelihood fishery,” he said.

“Right now, it is imperative that all of us work to promote calm and understanding,” Jordan said in a statement issued late Wednesday.

She said Ottawa is working with First Nations to establish agreements, but Indigenous leaders in Nova Scotia have said that process is taking too long.

Jordan said the talks will continue, and implementing the Marshall decision is a priority of the her government.

In the meantime, though, she said there can be no commercial fishery outside the commercial season. “Fishing without a license is a violation under the Fisheries Act, and anyone fishing outside the activities authorized under a licence may be subject to enforcement action,” she said.

Bruce Wildsmith, the lawyer who represented Marshall in 1999, said while it’s true Ottawa retains the right to regulate, the Marshall decision also says the fisheries minister must propose regulations and then consult with the Mi’kmaq about those rules.

“That has never been done,” he said in an interview.

Wildsmith, who is now an adviser to the Mi’kmaq in Nova Scotia, said negotiations with Ottawa have stalled.

As a result, another Indigenous band, the Potlotek First Nation in Cape Breton, plans to roll out its self-regulated fisheries plan on Oct. 1, he said.

Nova Scotia Premier Stephen McNeil called on the federal government to “ramp up” talks with the Indigenous leaders to bring a resolution to the conflict.

“It is the responsibility of the federal government to work nation to nation,” he said Thursday after a cabinet meeting. “I expect them to resolve this in a way that respects the laws of this country.”

Provincial Fisheries Minister Keith Colwell said the province will prosecute anyone who buys lobster caught out of season. 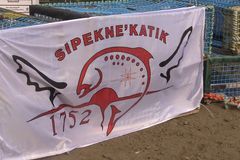