The chief of the Nova Scotia Mi’kmaq First Nation that began a self-regulated commercial fishery last fall says he’s dreading the start of the lobster season this spring, and worried about the potential for more confrontations as his people plan to expand their fishing industry.

“The water is unforgiving,” Sipekne’katik First Nation Chief Mike Sack said. “People don’t make it back from there.”

Nova Scotia’s most lucrative lobster-fishing season begins June 1, and Mr. Sack’s community plans to be a part of it – launching between 15 to 20 boats setting 1,500 traps. Last year, the band says its moderate livelihood fishery brought in about 100,000 pounds of lobster, the rough equivalent of one commercial licence.

“We’re not looking to mirror the commercial industry. We’re just looking to have a little piece of the pie that works for our people,” he said, adding that his reserve north of Halifax struggles with high rates of poverty. “It won’t be a free-for-all, that was never the plan.”

The band argues that a 1999 Supreme Court of Canada decision affirms its right to fish for a moderate livelihood when and where it wishes, including outside of federally regulated commercial fishing seasons. That decision was later clarified by the court, which said Ottawa could regulate the Mi’kmaq treaty right for conservation and other limited purposes.

Sipekne’katik’s plan to return to the water puts it on a collision course with Ottawa, with federal Fisheries Minister Bernadette Jordan saying enforcement officers will be in place in St. Mary’s Bay to “uphold the Fisheries Act” if Sipekne’katik fishermen harvest lobster.

An unregulated Mi’kmaq fishery is a contentious issue for non-Indigenous commercial fishermen, who responded with sometimes-violent protests last fall when Sipekne’katik fishermen began harvesting lobster after the commercial season had closed.

The chief said he will be asking the United Nations to send peacekeepers to assist his people. Last fall, some of them were trapped inside a lobster pound, before it was pelted with rocks, ransacked by a mob and later burned to the ground. In December, a Mi’kmaq fisherman in Pictou Landing was shot at when he tried to stop a group from cutting his traps.

With the tension over the Mi’kmaq right to operate a fishery outside of Ottawa’s control unresolved, Mr. Sack says he’s worried about the potential for more violence.

“I dread the thought of it. I think [Minister Jordan] is just empowering commercial fishermen to do the exact same thing as last year,” he said. “It’s just heading for rougher times, I guess.”

Last week, the Mi’kmaq band released its plan for a 2021 commercial fishery, saying it intends to fish from June to Dec. 15. The season will close from July 15 to Sept. 7 for a conservation study with Dalhousie University’s marine affairs program to monitor impacts and to protect molting lobsters. The band says its fishery could eventually grow to a maximum of 3,600 traps.

Mr. Sack says his community also wants to expand its commercial fishery into other species, including snow crab, clams and eels, all with their own management plans and seasons. But he says a recent seizure by federal Fisheries and Oceans (DFO) officers of a band member’s gear while fishing for crab has set back negotiations with Ottawa over their treaty-based fisheries.

Robert Silyboy, a Sipekne’katik fisherman, says he was tailed by DFO and Canadian Coast Guard vessels when he tried to harvest crab out of season earlier this month. He told enforcement officers he had a treaty right to fish for ceremonies, food and gatherings, but they took his catch and traps anyway.

He believes commercial fishermen followed his boat and reported him to authorities when he started fishing in waters off Sherbrooke, N.S.

“I wasn’t hiding what I was doing, it was the middle of the day,” he said. “It’s sad to say, but any Mi’kmaq fisherman on the coast of Nova Scotia, if you try to fish, you’re immediately targeted. They’re infringing on my treaty right.”

He said it doesn’t matter whether he’s fishing for lobster, tuna, mackerel or crab – he’s being watched and followed everywhere he goes. Last fall, one of his boats was destroyed in a suspicious fire while docked at the wharf.

The federal Fisheries Department says Sipekne’katik requires a communal licence for fishing snow crab under provisions of the Fisheries Act. Mr. Sack argues the band does not require a licence if its members are fishing for food to feed their own people.

“We authorized him to go out to catch a feed of snow crab for our community,” he said. “The DFO officers infringed on his right again, and seized his pots. … That’s a hard one for us. You can’t have discussions in good faith when they’re out there doing that.”

Ms. Jordan said she had negotiated agreements with other bands for a moderate livelihood fishery, and that she expects Indigenous fishers to have a federal licence before harvesting lobster this year.

“The moderate livelihood fishery for this year will have to take place within a DFO-established season,” she said.

“We have conservation and protection officers who are on the water … making sure people are doing things within the conservation lens. They have a job to do and that’s to uphold the Fisheries Act, and they will be there to do that job.”

The minister has repeatedly noted the principle of closed seasons exists for conservation purposes and has said her department will negotiate the distribution of commercial licences tailored to the needs of each First Nation.

– With a report from the Canadian Press 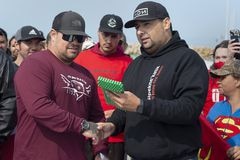 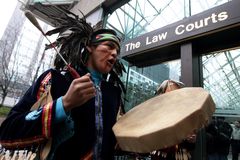