Lawyers for a Nova Scotia man fighting a decision to revoke a personalized licence plate bearing his surname – Grabher – say the case is about fundamental rights and is no trivial matter.

Lorne Grabher’s Nova Scotia plate, which he had for nearly 30 years, was revoked by the province’s Registrar of Motor Vehicles in December, 2016, after it received a complaint saying the sign promoted hatred toward women.

Mr. Grabher, who was represented by the Calgary-based Centre for Constitutional Freedoms before the Nova Scotia Court of Appeal, which reserved its decision on Tuesday, maintains the province infringed on his freedom of expression.

However, in a ruling issued last January, the Nova Scotia Supreme Court said that constitutionally protected freedom does not extend to government-owned licence plates.

“Today we are arguing about the revocation of a licence plate, a seemingly trivial dispute,” Mr. Grabher’s lawyer Lisa Bildy told the three-member Appeal Court panel. “To Mr. Grabher, whose family name has been tarnished as offensive and deplorable, this is anything but trivial.”

In her 2020 ruling, Justice Darlene Jamieson decided that licence plates are not “public spaces” with a history of free expression, adding the registrar recalled the plate because it could be interpreted as a socially unacceptable statement without the benefit of further context that isn’t provided on licence plates.

Under provincial regulations, Nova Scotia’s registrar can refuse to issue personalized licence plates if the proposed combination of characters expresses or implies a word, phrase or idea that could be considered offensive or not in good taste.

Ms. Bildy told the panel that fundamental freedoms protected by the Charter of Rights and Freedoms have been increasingly constrained under the guise of keeping Canadians safe from words or ideas that others have decided they shouldn’t be exposed to.

“And that is how we find ourselves here today discussing a case where a court has held that a man’s family name could be interpreted as promoting sexualized violence against women and girls,” Ms. Bildy said. “Where a single, anonymous busybody could successfully move the state to reverse 27 years of acceptance of Mr. Grabher’s licence plate to swiftly clamp down on the expression of that name in a public forum.”

Ms. Bildy argued that the appeal hinges on three factors: that protections under the Charter apply to an individual’s expression on a personalized licence plate in Nova Scotia; that interpreting an Austrian-German name as an objectionable English phrase and then censoring it infringes the Charter; and that the trial judge erred in finding that the name Grabher promotes sexualized violence without providing any meaningful evidence.

Another lawyer for Mr. Grabher, Jay Cameron, pointed out that the registrar had decided that Mr. Grabher’s plate was appropriate for 27 years and only decided that it was illegal after an anonymous complaint.

Meanwhile, Crown lawyer Jack Townsend argued that there was no evidence the registrar’s decision had harmed the Austrian-German community. He said that the case revolves around whether the location of the expression at issue – a licence plate – removes its Charter protections.

He pointed out that all licence plates are Crown property and they remain so even when displayed on a vehicle.

Mr. Townsend said provincial regulations restrict a person’s ability to express themselves within the space provided on a licence plate to a sequence of between two and seven letters, numbers and spaces.

“What I would submit is precious little can be accomplished in that space in terms of expression which promote values relating to democracy or the search for the truth,” Mr. Townsend said.

He said if any value is to be promoted on a licence plate it would seem to be self-fulfilment, and even then, the expression would be limited because of size constraints.

He added that the expression has never been entirely free, because it is subject to the approval of the registrar. He said there needs to be some flexibility allowed in making those decisions in order to prevent the use of phrases that could be seen as hate speech.

Mr. Grabher’s is not the first licence plate case to be taken on by the Centre for Constitutional Freedoms.

It assisted Tomas Manasek, who last June successfully got the Alberta Registrar of Motor Vehicles to reverse its decision to deny his personalized FREE AB licence plate. And it also won a case involving a Manitoba Indigenous man, who wanted his NDN CAR plate returned.

However, the centre was unsuccessful in a court challenge against Manitoba Public Insurance, which had revoked the ASIMIL8 plate of an avid Star Trek fan because of a complaint that it was offensive to Indigenous people. 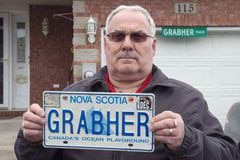 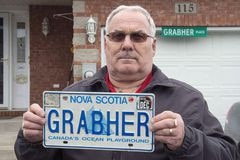