Prime Minister Justin Trudeau received praise and drew protests Friday for his government’s environmental policies as he met with one of the country’s two remaining Liberal premiers.

Nova Scotia Premier Stephen McNeil thanked Trudeau for providing “a good start” to the costs of cleaning up a lagoon near Pictou Landing First Nation where decades of contaminated pulp mill waste has accumulated.

The gratitude came as the two prepared to hold talks at an Antigonish community centre and the day after Ottawa pledged to spend $100 million to help clean up one of Nova Scotia’s most polluted sites.

The Boat Harbour lagoons near the Pictou Landing First Nation are contaminated with millions of litres of treated waste water from the nearby Northern Pulp kraft pulp mill.

The federal money will be used to restore the lagoons to their natural state as a tidal estuary that empties into the Northumberland Strait.

Later in the evening during a speech to the party’s annual meeting McNeil repeated his praise, and vowed to work hard to help the federal party in the fall federal election.

“The Trudeau government announced an … investment in helping us deal with the wrong of Boat Harbour, and that cleanup will happen,” said the premier.

However, as the two leaders met, a group of about a dozen protesters made clear that they’re dissatisfied with the Trudeau government’s measures to reduce carbon emissions — and its support of the Trans Mountain Pipeline expansion project.

Two members of the Extinction Rebellion direct action group were arrested for blocking traffic, saying as they were led away that carbon taxes introduced by the Trudeau government aren’t going far enough in efforts to reduce carbon emissions.

As he was assisted into a police vehicle, Patrick Yancey said, “I’m being arrested for refusing to move out of the way here, because we’ve tried everything else and we need the politicians to listen and get the climate targets in line with 1.5 degrees Celsius of warming.”

A report last year by the Intergovernmental Panel on Climate Change, or IPCC, concluded that while it’s technically possible to cap global warming at 1.5 degrees Celsius by the end of the century, it is highly unlikely.

The report says achieving the goal of the Paris Agreement Canada signed onto would require a dramatic overhaul of the global economy, including a shift away from fossil fuels.

Yancey’s wife, Moraig MacGillivray, 40, said it was the second time her husband has been arrested and she expected he’d be released before long.

“We’re here to send a message to Justin Trudeau that the climate emergency is urgent and the way the prime minister is investing in new pipelines is not the way to proceed,” she said.

“As citizens, we can’t sit back and watch this any longer.”

In his speech to the Liberal partisans, Trudeau simply didn’t mention a significant court victory supporting the Trans Mountain pipeline and expansion project his government has purchased for $4.5 billion.

Just hours earlier, the B.C. Court of Appeal ruled against the British Columbia government’s efforts to stall the project, concluding it can’t restrict oil shipments through its borders

Trudeau focused his speech on economic issues and a familiar litany of criticisms of the Conservative Leader Andrew Scheer, whose party is now leading the Liberals in the polls.

He also cited the Trump administration’s decision last week to lift its controversial tariffs on Canadian and Mexican steel and aluminum as an example that the federal Liberals remained focused on protecting jobs.

“Canadians are counting on us to continue to improve their standard of living,” he told the audience. 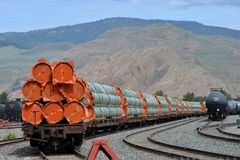