Nova Scotians took to the streets Monday to push for a public inquiry into Canada’s deadliest mass shooting as new court documents revealed further allegations about the gunman, including that he was a sexual predator who smuggled guns and sold drugs.

Anger is growing in Nova Scotia over the federal and provincial governments’ decision to hold a panel review rather than a public inquiry into the April attacks that left 22 people dead. The three-member panel has no power to compel witnesses and no requirement to conducts its business in public.

Hundreds rallied in Halifax and outside the Bridgewater, N.S., constituency office of provincial Justice Minister Mark Furey, who announced the review last week along with federal Public Safety Minister Bill Blair, contending it would be faster and less traumatizing for the victims’ families than an inquiry.

Protesters say a review won’t adequately address police missteps that may have contributed to toll of the mass shooting. They’re calling for a full inquiry that could hold public hearings, force witnesses to testify and produce binding recommendations to prevent similar tragedies.

They want to know what could have been done to prevent the massacre committed during a 13-hour rampage by Gabriel Wortman, who is described in newly released witness statements given to police as an alleged “sexual predator” who “burns bodies,” smuggled guns from Maine, sold painkillers OxyContin and Dilaudid, and had a secret room and false walls at his Dartmouth denture clinic, where police were told he hid weapons.

These witnesses, interviewed by police after the April killings, are not identified. They include neighbours, family members and employees, including one who said the gunman described how to dissolve bodies and kept chemicals for this purpose under his deck. This same person called him a sexual predator, but for reasons not revealed in the documents.

The records, part of previously redacted information used by the police to obtain search warrants connected to the continuing RCMP investigation, were ordered unsealed by a judge on Monday, as part of a legal challenge by a group of media outlets including The Globe and Mail.

The demonstrators calling for an inquiry are backed by prominent women’s groups, legal experts, dozens of senators and thousands of Nova Scotians slamming the review process – which is scheduled to produce a final report by next August – as secretive and ineffective.

“I don’t plan on stopping,” said Harry Bond, whose parents Peter and Joy Bond were killed in the mass shooting. He drove to the Bridgewater rally, and he says he will continue attending such events until a public inquiry is announced.

“It’s not something we want to do, but with them wanting to do a review instead of a public inquiry, it’s something we’re forced to do.”

Cathy Mansley, a former RCMP officer who lives in Port Hawkesbury, N.S., said she doesn’t think the demonstrations will end until the governments reverse their decision.

“People are angry, people are furious. They’ve lost their trust in the RCMP because of this,” said Ms. Manley, who was a claimant in a class-action suit over discrimination and sexual abuse in the RCMP that was settled in 2016.

“This is hurting the police even more, and it’s hiding the mistakes of management. It puts our first responders at even more risk if they don’t have an inquiry. They’re not the ones who deserve to take the brunt of this.”

More rallies are planned this week, including a march on the Nova Scotia Legislature Wednesday morning organized by families of victims who’ve launched a class-action lawsuit against the RCMP.

The demonstrators are angry there were no criminal charges against the gunman in the years leading up to his attack, despite multiple domestic violence and weapons complaints. His rampage started on April 18 in Portapique, N.S., with an assault on his common-law wife.

Protest organizers say there is clear precedence for a public inquiry – pointing to cases such as the Westray Mine disaster in Plymouth N.S., in 1992, when an inquiry was ordered just a week after 26 coal miners were killed in an explosion. That process led to new legislation that holds managers and directors of corporations criminally liable if they fail to take steps to protect the lives of their employees.

Ms. Mansley, who spent 24 years as an officer and had her own experiences with sexual assault, said the RCMP need a culture change when it comes to investigating domestic violence.

“There’s an attitude in the RCMP when it comes to these kind of calls, and I’ve seen it more than once. I’ve seen managers cover it up,” she said. “It just traumatizes victims further. These police officers are still out there with their same ideas on domestic violence.”

Critics complain the review of April’s mass killing lacks the teeth to properly examine the role domestic violence, and how it’s policed, played in the attack. If an RCMP officer involved in the case retires, for example, they would no longer be required to co-operate with the review.

Opposition politicians are calling for an emergency sitting of the provincial legislature to allow for a bill to be tabled forcing a public inquiry.

“There was only one thing these families asked for: an inquiry. Given the unthinkable tragedy they have been through, it wasn’t a lot to ask,” said Tim Houston, leader of Nova Scotia’s Progressive Conservative party.

“The Premier took the easy way out. He has denied justice and denied the opportunity to make positive change for our entire province and country.”

Claudia Chender, an NDP MLA for Dartmouth South who was at the Halifax rally, said an inquiry is the only way to ensure transparency and accountability for a province demanding answers.

“We need a public inquiry in which panelists are commissioners and can find the information they need to get to the truth and, most importantly, to get to justice,” she said.

Nova Scotia Premier Stephen McNeil has defended the review process and says its panelists – former chief justice of Nova Scotia Michael MacDonald; former federal attorney-general Anne McLellan; and Leanne Fitch, the former chief of the Fredericton Police Force – can ask his government for more powers if they need them.

Editor’s note: (July 28, 2020): An earlier version of this story said the shooting was worst mass killing in Canadian history. 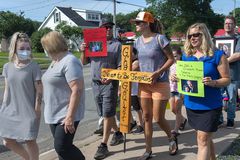 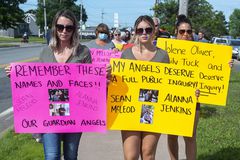