Nova Scotia’s transportation minister says his department is focusing on next year’s sailing season for the Yarmouth-to-Maine ferry as the current season winds down without a single crossing having been made.

Lloyd Hines stopped short Tuesday of saying there would be no sailings by Bay Ferries in what remains of this year’s season, which is slated to conclude Oct. 15.

The heavily subsidized ferry has been docked while a terminal is renovated in Bar Harbor, Maine – a delay that has cost Nova Scotia taxpayers almost $20 million.

“Nothing really has changed. We’re extremely focused on next year’s season and work continues at the (terminal) site,” he told reporters at the legislature. “We are going to have a statement on what the season looks like next week.”

The terminal upgrades are projected to cost about $8.5 million, but the province is also considering a subsidy in the range of $11.4 million for Bay Ferries, a figure first reported by AllNovaScotia.com.

Progressive Conservative Leader Tim Houston said the loss of this year’s sailing season has been an “unmitigated disaster” and the Liberal government has to own up to its responsibility for the situation.

“This is terrible for taxpayers this year,” Houston said. “Twenty million dollars, and it won’t sail a single time.”

Houston said the government needs to restructure its contract with Bay Ferries to ensure it doesn’t pay for a service it doesn’t receive. “This would never happen in private industry with real people’s real money,” he said. “This can only happen in government, and it’s a shame it’s happening here.”

This year’s season was supposed to be the first to feature sailings to Bar Harbor after five years of trips between Yarmouth and Portland, Maine. Bay Ferries said the impetus for the port switch was potential savings in fuel costs because of a shorter trip.

But the move was plagued by delays from the start, mainly due to requirements by U.S. Customs and Border Protection, which ordered specific renovations to the Bar Harbor terminal building before it would put agents in place to process ferry passengers.

The work forced the ferry’s operator to cancel and delay bookings several times before finally suspending them in July.

To expedite the U.S. security process, the province hired former U.S. ambassador to Canada David Wilkins in June to lobby on behalf of the ferry at a cost of US$10,000 a month. Wilkins’ contract expired Aug. 31. without much progress reported.

The Liberal government continues to argue the ferry subsidy is essential in order to support tourism and the struggling economy in southwestern Nova Scotia.

Premier Stephen McNeil defended this year’s payout as necessary for the fixed costs associated with upkeep for the ferry and for the labour needed should it be able to sail. The premier said he wants taxpayers to know that he “understands their frustration” that the ferry hasn’t sailed.

“But the reality of it is we believe this international link is important to us,” he said. “We believe this link will continue to allow growth in the tourism sector.”

McNeil said that hotel room stays are down about 27 per cent in the southwestern part of the province.

“So we know that is an important vessel in terms of growing the tourism economy in that part of the province and, I would argue, beyond,” he said. 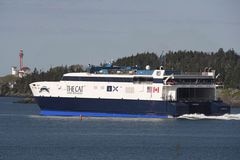 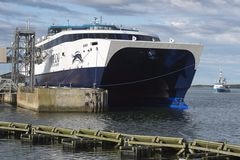