Labi Kousoulis told the legislature Tuesday he was “disappointed as all Nova Scotians would be” by the case and has spoken with the university’s administration.

“St. F.X. did acknowledge that they did not put the victim first,” he said, referring to a Canadian Press story about a Toronto-area woman’s experience reporting an alleged sexual assault to the university.

Kousoulis added that the Antigonish, N.S., university has apologized to the family and “refunded all of the student’s tuition, and room and board and all expenses paid for the year.”

The minister said he has also directed departmental staff to examine options to remove students accused of sexual violence from campus pending the outcome of a court process.

“Victims should feel safe coming forward,” he said. “We want to put the victim first, we want to protect them and we want them to come forward.”

The young woman has said her harrowing experience was exacerbated by St. F.X.’s mishandling of her allegations.

Although the school swiftly launched an investigation after the woman came forward and found the accused responsible, it quietly set aside its decision to suspend him for the next academic year – without notifying her – when he appealed.

The woman, whose name is under a publication ban, was devastated to discover him on campus last month and has since left the university.

Interim Progressive Conservative Leader Karla MacFarlane told the legislature Tuesday there seems to be “no justice whatsoever” for the complainant.

“It’s with sadness and frustration this weekend we read news stories about a young woman at St. F.X. who reported a sexual assault, followed all the rules set out by the university, and still felt unsafe at campus,” she said.

The university administration sought to reassure students in an e-mail to the campus community, reminding students of its zero tolerance policy towards sexual violence.

The head of student services encouraged students to use and refer others to resources aimed at sexual violence treatment and awareness.

Andrew Beckett also reiterated the school’s obligation to balance the interests of students who allege a sexual assault with those who are accused.

“I’d like to inform you that we were approached by the Canadian Press regarding an alleged sexual assault that occurred last year,” Beckett, also vice-president of finance and administration, said in the email.

“While we cannot comment on specifics of the case, we were able to clarify and confirm that the file remains active and is currently working its way through the Senate Appeal process,” he said.

“We were also able to confirm that in cases within the appeal process, a respondent may be permitted to continue to attend classes pending a decision on the file.

“It is important to understand that we assess the risk of each claim and put measures in place to mitigate the risk as much as possible, balancing a claimant’s and respondent’s right to education and due process until a determination in a case can be made.”

Court documents show the man was charged criminally with sexual assault last spring. A preliminary inquiry is set for Nov. 29.

Pam Rubin, a sexual violence trauma therapist, said the university appears to be using its discretion to protect an alleged perpetrator rather than a complainant.

“They could instead use that discretion to prioritize having a safe campus and show they take sexual violence seriously,” said Rubin, of the Antigonish Women’s Resource Centre and Sexual Assault Services Association.

“It takes some moral courage to exact culture change and that comes through the exercise of discretion by powerful institutions.”

She called it “unspeakably devastating” for a complainant not to be informed that the alleged perpetrator is on campus. 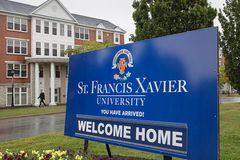