Iain Rankin, Nova Scotia’s premier-designate, says he wants to do things differently after seven years of governance under Premier Stephen McNeil. The province’s opposition parties say he can do that just by sitting in the legislature and answering questions.

The provincial assembly is scheduled to resume March 9 with a new Liberal premier facing pent-up demand for accountability. The legislature hasn’t sat since March 10, 2020, when it was adjourned in the early days of the pandemic.

No provincial assembly in Canada sat less in 2020 than Nova Scotia’s, which gathered for just 13 days. And it was the only province not to hold a fall session, resuming for just 17 minutes in December to officially prorogue until the new year.

Mr. Rankin’s surprise Liberal leadership win at a virtual convention in early February pushed the legislative session back even further, as it was rescheduled to give him time to transition to the top job. It was originally set to resume this week.

The provincial NDP and Progressive Conservatives say they hope the new leader offers a more accessible alternative to the McNeil government, which was often accused of trying to shut down criticism. They say the government has avoided tough questions about its handling of the pandemic and April’s mass shooting in Portapique by keeping the legislature on hold.

“They’ve exploited the pandemic to shut down democracy and really have their way,” PC Leader Tim Houston said. “This is not the way government is supposed to work.”

Mr. Rankin, a youthful 37-year-old who has prioritized environmental and social-justice issues, says he’s eager for the assembly to resume. The decision to not hold a fall session was made by Mr. McNeil, who argued that all legislative work should pause until his successor was chosen.

Mr. Rankin will bring new priorities and a different temperament to the job of premier. As a former minister of environment, he hired Nova Scotia’s first dedicated Crown prosecutor for environmental cases. He was also one of the first politicians to refer to Boat Harbour, a pulp mill effluent lagoon near Pictou Landing First Nation, as an issue of environmental racism.

He says the province has a responsibility to ensure that the postpandemic economic recovery includes opportunities for Indigenous and racialized Nova Scotians. He’d like the government to use its purchasing power more often to increase the number of visible minorities in senior management roles in the private sector, rewarding companies that embrace diversity.

“Lurking behind the pandemic is, I think, the dual crisis of the climate and inequality,” he said in an interview. “When we’re looking at economic recovery, we have an opportunity to ensure we have policy around supporting groups that have not been part of past economic success.”

He added that Nova Scotia does not have a choice when it comes to moving to greener energy sources and away from fossil fuels.

“It’s an existential threat,” said Mr. Rankin, who will be sworn in next Tuesday along with his new cabinet. “We have to try to transition, in a pragmatic way, to a low-carbon economy. I see it as an opportunity, with the potential for economic spinoffs.”

His leadership victory marks a sharp departure from the McNeil era, with its stern focus on balanced budgets. To get the job, he beat former labour minister Labi Kousoulis and former health minister Randy Delorey, who was seen as the candidate of choice for the party’s old guard.

Mr. Rankin stresses the importance of reconciliation with the province’s Mi’kmaq people, but he avoided a question about provincial regulations that prevent Indigenous fishermen from selling seafood caught through the moderate livelihood fishery. While the Sipekne’katik First Nation filed a lawsuit against the Attorney-General of Nova Scotia on that very issue this month, Mr. Rankin insists it’s a federal issue.

Mr. Houston, meanwhile, said the opposition is anxious to question the government in the legislature again on a range of issues – from flaws in the emergency alert system, exposed during the April mass shooting, to a growing housing crisis.

There’s no excuse for the legislature to have been out this long, he said, adding that the business of governing is supposed to continue through pandemics and changes in leadership.

“This is not supposed to grind to a halt because a government is changing their leadership,” Mr. Houston said. “This just shows how they’re willing to put Liberal party politics in front of the business of this province. It can’t operate like that. Government is for the people.”

The Liberals have made gains in popularity during the pandemic, however, with Mr. McNeil’s approval rating rising as Nova Scotia kept the number of cases down and avoided the widespread outbreaks seen elsewhere.

Whether the legislature meets in person next month will be decided by the house leaders. Since Nova Scotia doesn’t use legislature calendars, as other provinces do, the cabinet has the power to push back the reopening of the assembly if the new leader wants more time, explained legislative chief clerk James Charlton. 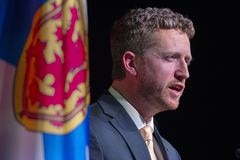 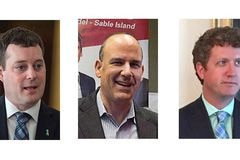