During his first news conference as premier-designate a day after his party’s election win, Nova Scotia Tory Leader Tim Houston said Wednesday his first order of business is keeping citizens safe from COVID-19.

The Progressive Conservatives surged to victory over the governing Liberals, winning a majority with 31 ridings in the province’s newly expanded 55-seat legislature.

Houston told reporters gathered in New Glasgow, N.S., that he will invite other parties to participate in meetings with public health officials, as he considers policies aimed at avoiding a fourth wave of the coronavirus.

“This is not something I think should be politicized,” he said. “I think it should be everyone pointed in the same direction and that direction is keeping Nova Scotians safe.”

The 51-year-old leader said he intends to meet chief medical officer of health Dr. Robert Strang later in the day to talk about issues such as how to reduce transmission when students return to school. “There are Nova Scotians all across the province that are really, really anxious to go back to school. We want to make sure that they understand the plan.”

Other key concerns, he said, include increasing the number of Nova Scotia residents vaccinated against COVID-19 and monitoring the fourth wave of the novel coronavirus in other parts of the country.

“We’re going to listen to Public Health, we’re going to work with Dr. Strang and his team, we’re going to get all of the information to make some common sense decisions,” he said. “The public safety of Nova Scotians is my primary concern.”

And as the newly minted premier-designate spoke to reporters, about 100 protesters gathered 150 kilometres away in Halifax, trying to prevent the removal of temporary shelters for the homeless. The City of Halifax started to remove the small, wooden shelters last month, and police suddenly arrived on bicycles early Wednesday to provide security as heavy machinery moved in.

NDP Leader Gary Burrill arrived at the scene, located in a riding his party won in Tuesday’s election, and led a chant of “Homes not cops, homes not cops.”

“Nobody has expressed a desire for this police action,” Burrill said. “We know we have a desperate housing crisis in Nova Scotia and if the government’s response is to send in a heavily armed police presence to evict people from tents and shelter where they’ve sought shelter, it’s a pretty darn poor response.

“As soon as the premier-designate has heard this disgrace is taking place, he should immediately be here himself to see it doesn’t proceed.”

Houston said he understands Nova Scotians are feeling the strain of housing shortages but he will not change his plan to lift rent control measures when the pandemic ends. “Housing is in crisis,” he said. “We know the housing crisis is very real. It didn’t develop overnight. It’s been developing over eight years. We didn’t have tent cities eight years ago.

“I understand the significance of the issue and we’re going to work with people to make sure they can access housing.”

Lisa Lachance, the newly elected NDP member of the legislature for Halifax-Citadel-Sable Island, said the problem of homelessness has been growing in her riding for the past decade.

“Things have changed in this community and there are people one rent increase away from also needing shelter there’s been no investment in housing, no rent control when it was needed, no support organizations to respond appropriately is what we’re seeing,” she said.

Meanwhile, there were signs of a steady flow of new infections of COVID-19, with nine new cases being reported in the province, bringing the total active cases of COVID-19 to 25.

Houston repeated his campaign promise that his party will improve the health system, including by increasing the number of doctors and shortening surgery wait times. The premier-designate said he’ll begin implementing his health-care-focused platform by consulting with workers in the network. 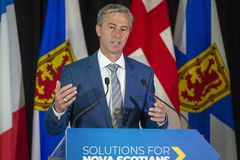 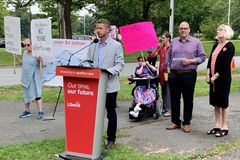 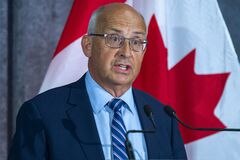