The Ontario Liberals are promising to slash the GO Transit fare to $3 for all journeys within Toronto, as well as for short trips anywhere on the network, while opening the door to uploading the city’s subway system.

The lower fares were included in Wednesday’s provincial budget, although they wouldn’t be implemented before early 2019, and have the potential to alleviate some crowding on subways. They would also move Mayor John Tory one step closer to fulfilling his election promise of cheaper access to GO lines in the city.

However, the budget also includes a potential minefield for the mayor, with the Liberal government pledging to begin discussions about taking ownership of the Toronto Transit Commission’s subway lines. That pledge, a promise that has already been made by the opposition Progressive Conservatives, raises issues of accountability and governance and could starve the transit agency of much-needed revenue, leaving it with just money-losing surface routes.

Mr. Tory was upbeat about the promised reduction in GO fares, but sounded a cautious note about the idea of the city handing over its subways. “This possibility will require a thorough consultation, council approval and clear benefits for the city,” he told reporters outside his city hall office.

Toronto’s transit needs promise to be an important issue in the provincial election coming in June. The NDP reiterated Wednesday its long-standing pledge to restore provincial funding to cover half of the TTC’s operating costs. And the Tories are promising more underground transit.

“In the Toronto area, we’re going to commit to making sure we close the loop along the Sheppard line. We’re going to make sure that we have a three-stop fully funded Scarborough subway.”

The provincial Liberals have cast themselves as infrastructure builders and the budget includes numerous examples of major capital projects started, and in some cases finished, in previous years. It also contains several promises to lower the cost of riding transit.

Under the terms of the new fare plan, starting next year any GO Transit trip within the city of Toronto would cost $3 for people using a Presto fare card, as would trips shorter than 10 kilometres anywhere on the GO network. This is down from the current base GO fare with Presto of about $5 and aligns it with the cost to ride the TTC.

A spokesman for the Minister of Transportation said that going to the $3 fare would cost the province an estimated $90-million over three years, although the exact price-tag would depend on ridership. According to one earlier projection, such a reduction could lead to about 75,000 additional daily riders on GO within the city itself.

The fare cut would fulfill a key part of Mr. Tory’s 2014 transit pledge. Dubbed SmartTrack, the plan has been severely whittled away, but access to GO lines for a TTC fare was a key element.

However, Mr. Tory will now have to navigate the complicated question of who should own the city’s subway lines, which carry more than 1.3-million passengers each day and are crucial to the city’s economy. Uploading has been proposed before, and sparked a strong pushback in December from outgoing TTC head Andy Byford.

“I don’t believe that breaking up the TTC is either the right thing to do or the financially responsible thing to do,” he told The Globe and Mail in his exit interview.

“Because where the subways largely cover their costs, operating costs, the buses and streetcars do not. They’re cross-subsidized by the subway. And I don’t believe that that would help the city one iota.”

Among the questions inherent in uploading would be how revenue and operating costs can be apportioned on a system in which buses, streetcars and subways are integrated. Governance may also be an issue, with New York demonstrating the difficulty of having the subways run by another level of government. 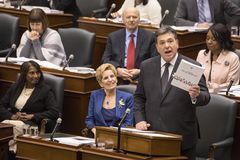 2018 Ontario budget: Liberals go into the red with billions in spending promises
March 28, 2018 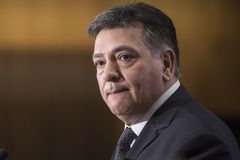 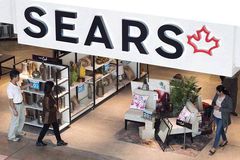