An Ontario stem-cell clinic says it will defy a Health Canada order to stop injecting patients with their own cells, treatments that the department says don’t work and may pose risks to the public.

The head of the Ontario Stem Cell Treatment Centre, based in Sudbury, said he will keep doing injections, exposing the challenges federal and provincial regulators face when it comes to policing the rising number of new and non-evidence-based treatments and therapies aimed at patients. Scott Barr said he is ignoring the Health Canada order in part because the College of Physicians and Surgeons of Ontario (CPSO) told him the decision to offer such treatments is up to his clinical discretion.

“We’re doing lots of stem-cell procedures. It’s the right of the patient to have these procedures,” Dr. Barr said.

There is pressure on provincial medical regulators to act and The Globe and Mail has learned that those in Quebec and Nova Scotia are investigating some doctors that offer cell-based therapies.

Earlier this week, The Globe reported that Health Canada has ordered three dozen clinics across Canada to stop offering stem-cell and platelet-rich plasma (PRP) injections to patients. The treatments typically involve removing cells from a patient’s body, manipulating them and re-injecting them into the patient, supposedly to promote regeneration and healing. There is no high-quality evidence showing the treatments, which can cost thousands of dollars, are effective and safe.

Dr. Barr provided The Globe with a copy of a letter he received from the CPSO in 2017 that says the college can’t approve specific treatments and that physicians must use their clinical discretion and follow the college’s complementary-medicine policy.

In a statement, CPSO general counsel Carolyn Silver said if a physician does not comply with a specific Health Canada directive, “we would need to consider what steps to take to ensure that the public is not being put at risk.”

Health Canada said it is treating the situation as a “high priority” and that if clinics don’t comply with its order, the department can pursue a number of options, including site visits, product seizures or referring charges to the Public Prosecution Service of Canada.

There have been growing calls for regulators to take action against the proliferation of for-profit clinics offering unproven cell-based treatments. In May, Health Canada took the first step by publishing a policy statement on cell-based therapies, stating that because the cells are processed after being extracted from patients, they qualify as drugs. As such, anyone wanting to use them in patients must first submit rigorous clinical trials and receive official federal approval.

However, it’s unclear whether all cell-based therapies will be captured by the federal enforcement. A Health Canada spokesman said some platelet-rich plasma treatments may not meet the definition of a drug because they aren’t processed, meaning the federal government doesn’t have regulatory authority over them. Instead, those PRP therapies would be considered part of the practice of medicine, which provincial regulatory colleges oversee.

So far, regulators in various provinces are taking different approaches.

Heidi Oetter, registrar of the College of Physicians and Surgeons of British Columbia, says the college’s rules prevent it from taking action against doctors who provide unproven treatments, unless they pose risks to patients greater than those posed by existing, proven therapies. But doctors must abide by Health Canada rules, which appear to restrict the use of stem-cell injections, she said.

The College of Physicians and Surgeons of Alberta declined an interview, but said its rules also prevent it from taking action against doctors offering unproven treatment. In a statement, a spokeswoman said the province allows PRP treatments in all practice settings and that the college has developed guidelines to assist doctors who perform them. But the college recently passed new bylaws that restrict stem-cell therapies to those offering them as part of a Health Canada-approved research trial.

The Collège des médecins du Quebec said it is investigating doctors at a handful of clinics that offer stem-cell treatments. College secretary Yves Robert said PRP is fairly common in Quebec, including in some hospitals, and that the regulator has reached out to Health Canada to confirm whether those treatments are included in the crackdown.

The College of Physicians and Surgeons of Nova Scotia said it has launched an investigation into one doctor who has provided unproven cell-based treatments to patients. College registrar Gus Grant said the investigation began recently, but legislation doesn’t allow the college to reveal any details.

Michael Rudnicki, scientific director of the Stem Cell Network, said many researchers are studying how stem cells can be used to treat numerous conditions, but they are not ready for the public. Clinics suggesting otherwise are wrong, he said.

“These treatments are unproven,” he said. “These clinics are for profit. They’re not research enterprises.” 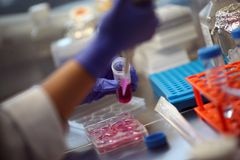