An Ontario court has dismissed a legal challenge of the government’s interim sex-education curriculum from the province’s elementary school teachers and a civil liberties group, saying educators are not restricted in developing lesson plans and can teach in a way that is inclusive of all students.

The Elementary Teachers’ Federation of Ontario (ETFO) and the Canadian Civil Liberties Association (CCLA) argued that the provincial government violated Charter rights by putting in place an outdated curriculum.

But a panel of three divisional court judges ruled Thursday that there has been no breach of Charter rights and that the Education Act and the Ontario Human Rights Code "require teachers and school environments to be inclusive, tolerant and respect diversity.”

The Ontario government directed school boards last August to scrap a 2015 sex-education curriculum for Grades 1 to 8 developed by the previous government and containing references to same-sex families and consent. It replaced it with an older curriculum from 2010, with a section on health and physical education that includes a 1998 document on sexual health.

“The 2010 curriculum contains no provision preventing teachers from addressing the topics of consent, use of proper names to describe body parts, gender identity and sexual orientation, online behaviour and cyberbullying, sexually transmitted disease or infections, in the elementary school classroom," the judges wrote in their ruling.

The CCLA said it would be appealing the decision. “Today is a bad day for equality rights,” said Cara Zwibel, the director of the organization’s fundamental freedoms program, in a statement.

ETFO president Sam Hammond said in a statement that the court’s decision was a “victory” for educators because the government made clear in the hearing that teachers could use their professional judgment in teaching the curriculum. At the hearing in January, Zachary Green, a lawyer for the government, said that while teachers are expected to follow an interim curriculum and assess students based on those grade-level expectations, they are also not prevented from drawing on resources, including the 2015 curriculum.

“The government’s explicit concession on this point in court makes this case a victory for ETFO and others. I have no doubt that such a concession would never have occurred without litigation,” he said.

Education Minister Lisa Thompson told reporters at Queen’s Park on Thursday that she was still reviewing the court decision.

She said that after holding public consultations, her government was drafting a new curriculum for the fall that would address a variety of issues, including cyberbullying, human trafficking and consent. But she would not commit to including discussions of transgender people or gender identity – issues that were raised by some social conservatives.

“We heard loud and clear from parents that they wanted to make sure that their students were receiving a curriculum that was age-appropriate and absolutely on the mark in terms of today’s realities. And that’s the curriculum they’re going to get,” she said.

NDP Leader Andrea Horwath said it was shameful for the government to fight the legal challenge instead of focusing on providing a safe environment for all children in school and ensuring that students learn about issues such as gender identity and cyberbullying.

“That should be paramount. Nothing has changed with our kids being at risk in schools with the lack of the updated curriculum,” Ms. Horwath said. “Maybe the Conservatives still think it is important to stick with their social-conservative radicals, but that’s not the vast majority of parents in this province.”

The ETFO had argued that the government restricted teachers’ freedom of expression by creating a chilling effect among educators with threats of disciplinary action. In a statement in August, Premier Doug Ford threatened to punish educators who defied his government’s orders to use a 20-year-old sex-education curriculum and launched a platform for parents to anonymously report concerns about what is being taught in classrooms. “Make no mistake, if we find somebody failing to do their job, we will act,” Mr. Ford said at the time.

Meanwhile, the CCLA said the government was discriminating against same-sex parents and their children and violating their constitutional right to equality by erasing references in the curriculum to sexual orientation, gender identity and same-sex relations.

In the interim curriculum, gender identity is mentioned in the introduction and the glossary, but is not among the grade-by-grade learning expectations for elementary students. Consent and sexting are no longer discussed in Grade 7, and the curriculum doesn’t include topics of gender identity and sexual orientation in Grade 3. The 2015 curriculum addressed all these topics.

The judges wrote that teachers’ freedom of expression is not constrained because, as long as learning expectations are met, educators can address topics that go beyond those set out in the curriculum.

The court said some of the public statements were “ill-considered,” likely a reference to Mr. Ford’s threats, but it did not constitute an infringement of rights.

In addressing the CCLA’s argument, the judges wrote that the omission of certain topics in the curriculum “could be said to negatively affect certain groups.” But they also wrote that “the provision in the 2010 curriculum requires that, to the extent possible, the implementation of the 2010 curriculum be ‘inclusive and reflect the diversity of the student population,' " regardless of culture, ethnicity, sex, gender identity and sexual orientation.

Transgender girl says Ontario’s repeal of sex-ed curriculum made her nervous about returning to school
January 22, 2019

Opinion
Sex-ed critics fear that it may ‘give kids ideas.’ But that would be a good thing.
January 15, 2019 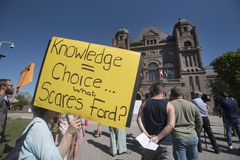