The Ontario government says its new autism program won’t be fully in place until 2021, a delay that caused parents to burst into tears because they say their children will continue to suffer without the services they need.

Todd Smith, Minister of Children, Community and Social Services, formally announced on Tuesday that the Progressive Conservative government is adopting recommendations for a needs-based program recently made by an expert panel. But while he had previously said the government was working toward implementing the changes in April, 2020, he said Tuesday the matter is complex and won’t be fully implemented until 2021.

Until the program is in place, parents won’t be getting government funding for autism therapy based on the needs of their children, which can cost up to $80,000 a year. Parents who were watching Mr. Smith’s news conference at Queen’s Park, some of them holding photos of their autistic children, began to cry during the announcement.

Mr. Smith said no government of any stripe has been able to properly provide services to the province’s autistic children.

“I understand it’s an emotional time. These parents have been waiting a long, long time to get these services, and they’ve been here on the front lawn at Queen’s Park for years,” Mr. Smith said.

“That’s why we’re taking the time to ensure that we get this right.”

Mr. Smith said training sessions and workshops for families are expected to be available by next April. Once completed in 2021, he said the new autism program will include core services such as applied behaviour analysis (ABA) therapy, occupational therapy, speech and language pathology and mental-health wellness, as well as early-intervention tools.

In the meantime, Mr. Smith said parents on the wait list for services will be eligible for more limited one-time funding of either $20,000 or $5,000, depending on their child’s age – the maximum annual amounts they were to get under a plan the Progressive Conservative proposed earlier this year but withdrew in the face of parents’ protests.

The delay comes after a government-appointed advisory panel released a report in October, calling on the government to reverse its widely criticized approach to funding autism therapy for children.

Former minister Lisa MacLeod had said the government’s plan would clear a backlog of 23,000 children awaiting treatment. But some families said the capped funding – $20,000 a year for children younger than 6, and $5,000 a year after that – was nowhere near what they needed for therapy.

Laura Kirby-McIntosh, president of the Ontario Autism Coalition and a member of the advisory panel, told reporters on Tuesday that the delay “doubles down” on Ms. MacLeod’s failed program.

“These parents have been to hell and back multiple times," she said. “Why not take the money that they’re throwing out the door in cheques and use it to hire the staff that they need to get the program ready on the date that they promised us?”

Faith Munoz, a parent of a seven-year-old with autism, said her son needs up to 15 hours of therapy a week, but is currently only receiving two hours.

“We have already been waiting for 18 months … we’re in crisis, we’re desperate for help from this government, and they’re giving us nothing," she said. “This is a very sour Christmas for our families.”

After Ms. MacLeod announced her plan in February, parents packed the public galleries at Queen’s Park and held rallies across the province in protest. (Under the previous Liberal government program, funding was unlimited for children in the program.)

About a month later, the government backed away from some of its changes, pledging to explore how the program could provide additional support for families based on their needs and doubling the funding available to all families to $600-million a year.

Ms. MacLeod was subsequently demoted in a cabinet shuffle to the Minister of Tourism, Culture and Sport. Mr. Smith took over the autism file. 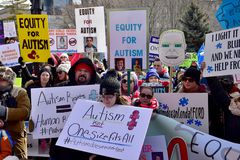 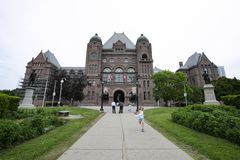