As it moves to expand partnerships between public colleges and private career schools, the Ontario government is taking aim at the author of a 2017 report that warned the arrangements pose a threat to the college system.

On Monday, Minister of Colleges and Universities Ross Romano dismissed the report, which was done by David Trick, as the work of "a political friend” of the previous Liberal government. He added that the resulting policy choices were “not to the benefit of Ontario’s colleges and students.”

Mr. Trick, a former civil servant, was appointed interim head of the Higher Education Quality Council of Ontario in September, the provincially funded agency that advises government and monitors Ontario’s higher education system. In 2017, working as a consultant, Mr. Trick wrote that these partnerships, a handful of which were already operating, posed a significant risk to the reputation of the entire college system, which “should be a deep concern for government.” The report led to a moratorium on further partnerships.

Currently some publicly funded Ontario colleges offer degree programs to international students through private education providers, mostly located around the Greater Toronto Area. It seems the primary benefit is to generate revenue for colleges located outside the GTA that, for various reasons, have more difficulty attracting international students, Mr. Trick wrote in his report. The private providers, often housed in strip malls and office buildings, send a cut of the lucrative international student tuition fees to the degree-issuing college.

The private education providers are acceptable to international students in part because of their proximity to Toronto. The attraction is that once they complete their program students receive an Ontario college diploma, which makes them eligible for a graduate work permit in Canada (not available to career college graduates), an important step on the path to becoming a permanent resident.

The government announced last week that it would allow all colleges to launch or expand their partnerships in order to generate extra revenue.

But questions have been raised about the wisdom of offering these programs.

He concluded that the partnerships “do not serve an important public service,” and that they “pose risks that are inherently difficult to manage.”

Potential risks identified in the report include the possibility that the partnerships may result in an inferior educational experience, since students are far from the oversight of college administrators and may be reluctant to complain. The private partners may provide lower levels of service compared to a college campus, there may be accessibility issues for those with disabilities, or substandard building facilities, Mr. Trick wrote.

Mr. Trick said Monday he was not in a position to discuss the report. He is a former assistant deputy minister of finance in Ontario and was the first CEO of the University of Guelph-Humber. He was working as a consultant in 2017 when he produced the report on college partnerships.

Ontario colleges complained earlier this year that they would be badly affected by the provincial government’s 10 per cent cut to tuition fees. Many are also facing demographic decline in the 18-24 age group in their regions, which threatens future enrolment.

Expanding international enrolment through these private partnerships may help some colleges recoup some of the lost revenue.

"This new policy enables postsecondary institutions to be financially competitive so that they can invest that economic benefit back at their main campuses,” Mr. Romano said in a statement Monday.

“We think they’re a good idea and timely,” Ms. Franklin said. “The government has worked really hard to be careful about this. … The colleges are seized with this issue, that the experience of international students coming to this province has to be a good one.”

She said a lot of time had passed since Mr. Trick’s 2017 report and much work has been done to develop joint assessment frameworks for all colleges to ensure high standards.

Mr. Trick’s report said the six colleges with private partners, Cambrian, Canadore, Northern, Lambton, St. Clair and St. Lawrence, expected enrolment of nearly 8,500 at their partner schools in 2016-17, with net revenue of more than $30-million. For the colleges with the larger programs, that represents between 9 per cent and 13 per cent of their operating revenue, Mr. Trick’s report states.

The government said new public-private partnerships will be capped at a prescribed one to two ratio; for every international student on the home campus, there can be a maximum two additional students at the private campus. That rule will not apply to existing partnership arrangements, some of which exceed that ratio.

RM Kennedy, chair of the college faculty union, said there are a number of reasons to oppose the expansion of public-private partnerships, which, he said, were being wound-down under the previous government. 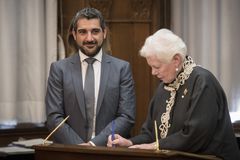