Small communities, schools and parks in Ontario could lose their blue-box service when the private sector assumes responsibility for curbside recycling, according to draft plans that contradict the province’s public assurances that there will be no such disruption.

As negotiations continue on the shift to an industry-led recycling system, the Ford government is considering an approach that could exclude communities with populations of less than 5,000, as well as educational institutions and public spaces. This could transfer additional financial responsibility to affected municipalities, at a cost to taxpayers.

The proposed plan, which is outlined in presentations prepared by the Environment Ministry and obtained by The Globe and Mail, is the subject of continuing consultations with producers, municipalities and waste managers. It would set high, enforceable targets aimed at significantly improving recycling rates.

The Progressive Conservative government has said it intends to release draft regulations by the end of the summer, with the goal of beginning a transition to what is known as a “full producer responsibility” system in 2023.

In an interview, Environment Minister Jeff Yurek insisted that he will keep his promise, made last year, that residents would not see their recycling service cancelled or weakened. “I am very adamant that if you have curbside pickup right now, you will continue to have it during the process and after the process," Mr. Yurek said.

He said the government is asking producers to consider how they could serve smaller communities – some of which, he noted, currently rely on central depots and have no curbside pickup. Mr. Yurek also said that the government is still looking at how to handle schools. He said he believes they will be serviced, if only because producers will need to collect from schools in order to hit regulated diversion targets (diversion refers to waste that is diverted from landfills for recycling).

The roughly $250-million cost of the blue-box system in Ontario is currently split evenly between producers, who contribute based on the weight of the materials they put into the market, and municipalities, which are responsible for providing the curbside service. A full producer responsibility system transfers all of the financial and operational onus to the private sector.

The plan for an entirely private recycling system dates back to legislation passed by the provincial Liberals in 2016. Despite the pandemic, draft regulations are still on track to be made public in the coming months, Mr. Yurek said.

The idea behind full producer responsibility is that if companies are responsible for their materials, even after they are discarded, they will work harder to reduce their waste. Another fundamental tenet of the approach is a common list of materials; no matter the community, the same items will be eligible for blue-box collection, which should reduce confusion and, in turn, contamination.

Ontario’s blue-box diversion rates have stalled at around 60 per cent for the past 15 years. The government predicts that the new approach, with high diversion targets, will bring that number up to nearly 80 per cent in 2030.

Although Ontario’s current regulations exclude communities with less than 5,000 people, the reality is that some municipalities have voluntarily serviced those areas, with industry kicking in half the cost.

A 2019 provincial report on recycling and plastic waste, prepared by special adviser David Lindsay, stated that municipalities and industry agreed during mediation that “all communities that have blue-box services must continue to have access to recycling during and after transition.”

Without a guarantee written into the regulations, however, it would be up to producers to decide whether to serve small communities.

In an April 21 letter to Mr. Yurek, the Bluewater Recycling Association – which represents 20 rural municipalities, including eight that have populations under 5,000 – described the government’s proposal as inconsistent with the consultations to date.

“Our understanding has always been that the main driving factor behind the change was to improve the current system, yet we are faced with proposals that actually would degrade the progress we have made over the last 30 years,” the letter said.

The Association of Municipalities of Ontario estimates that there are more than 100 communities, representing more than 250,000 people, that don’t meet the 5,000-person threshold. Dave Gordon, the association’s senior adviser on waste diversion, said in an interview that municipal governments welcome the transition but are concerned about the draft eligibility criteria.

Mr. Gordon said the association has made its views known to the government and is hopeful that communities now receiving coverage will continue to do so.

Schools are also technically excluded under the present regulations, but some have been served by their municipalities, with funding from industry, if they are located on a residential blue-box route.

According to an April 9 ministry presentation to working groups involved in the consultations on the transition, education facilities might not be included in the regulations. Such an approach could leave municipalities or school boards on the hook for the full cost and administration of recycling services in schools.

Charlotte Ueta, project director for the City of Toronto’s efforts to prepare for the transition, said she was surprised that schools might be excluded. The municipality currently collects recycling from both its public and Catholic school boards. City officials are still assessing what it would cost Toronto if it had to carry on collecting blue-box materials from schools on its own. “What we’re really hoping to see here is a seamless transition,” Ms. Ueta said.

A more recent ministry presentation, dated May 22 and focused on diversion targets, proposes setting individual targets across five broad categories: paper; rigid plastic; flexible plastic; glass; and metal. Under the proposal, companies would not have to report diversion data for specific materials under those categories, such as beverage containers and plastic film.

The targets would not be enforceable until the transition is completed in 2026, and they would increase until 2030. The government projects that if the escalating targets are met, the overall diversion rate will hit 76 per cent between 2026 and 2029, and 79 per cent by 2030.

Ms. Ueta said the city is pleased with the proposed high targets. But she also said that the system needs better reporting requirements and even higher targets for certain harder-to-recycle materials, such as plastic film.

The Canadian Beverage Association is asking the province for a 75-per-cent diversion target for beverage containers. President Jim Goetz said the sector also wants a beverage-container recycling program for public spaces, similar to what’s in place in Manitoba.

“Without a public-space recycling program, it would be difficult for us to achieve better results than we’re achieving through the blue-box program,” Mr. Goetz said, noting that upward of 40 per cent of beverage containers are discarded away from home. “We feel that we need a specific target to motivate everybody to be on the same page.”

The Lindsay report said parks and public spaces that currently receive blue-box service should be covered by the new system. However, according to the ministry presentations, the province is considering leaving parks and public spaces out of the regulations altogether. The ministry suggests that producers might voluntarily collect from such high-traffic areas in order to meet the regulated targets.

Sebastian Prins, the director of government relations for Ontario for the Retail Council of Canada, said a new producer-run recycling system that has to hit some of the highest targets in North America will be unlikely to drop too many large potential sources such as small towns or schools.

“We’re looking to drive efficiencies," he said. "There is a recognition that flexibility is needed on the producer part, so that we’re building a cost-efficient system.” 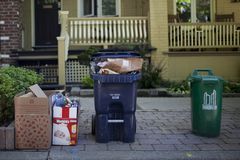 Follow Kathryn Blaze Baum and Jeff Gray on Twitter @KBlazeBaum @jeffreybgray
Report an error Editorial code of conduct
Due to technical reasons, we have temporarily removed commenting from our articles. We hope to have this fixed soon. Thank you for your patience. If you are looking to give feedback on our new site, please send it along to feedback@globeandmail.com. If you want to write a letter to the editor, please forward to letters@globeandmail.com.
Comments