The union representing 55,000 custodians, secretaries and education-support workers at Ontario schools is threatening to strike on Monday if a deal on a new contract is not reached, prompting some school boards to warn parents that students may have to stay home.

The Canadian Union of Public Employees (CUPE), whose members were already just two days into a new work-to-rule campaign, announced on Wednesday that it was providing the legally required five-day notice for a full-blown strike – but that it would also enter into new talks to reach a deal.

CUPE blamed its escalation on what it called unsafe moves by school boards, saying some had responded to the union’s work-to-rule campaign by having 10-year-olds monitor kindergarten lunches and leaving exterior school doors unlocked instead of having principals answer buzzers usually attended to by clerical staff.

Contract talks broke off last Sunday, and confusion persisted over when the two sides would actually meet again – although both Ontario Education Minister Stephen Lecce and CUPE said they wanted talks to resume as soon as possible.

Ontario government officials were taken aback by the union’s latest move. Mr. Lecce said the two sides had been close to a deal before talks broke off.

All of the province’s education unions saw their contracts end Aug. 31, amid controversy over plans by the government of Premier Doug Ford to increase class sizes and force high-school students to take online courses.

Unlike the unions representing high-school and elementary-school teachers, CUPE is in a legal strike position with a federal election under way in which the Liberals have been hoping to link Conservative Leader Andrew Scheer with Mr. Ford’s record in Ontario. In comments this week, Liberal Leader Justin Trudeau cited the province’s education labour unrest.

Mr. Lecce said he felt that the process needed to be “depoliticized,” but did note the timing of the union’s move.

“I am not going to opine fundamentally on what is driving them," he said. "I mean, 48 hours [after] they initiate a labour action, we’re now at this stage. You know, they are taking action, a potential strike, on the day of the first [federal election] debate.”

Asked if CUPE was timing the strike to take advantage of the federal election, Laura Walton, president of CUPE’s Ontario School Board Council of Unions − which negotiates centrally on behalf of the union’s school-board employees − said her union would rather have signed a deal before the school year began.

But CUPE Ontario President Fred Hahn said the union “has got to use every tool” to protect student services and its members’ work: “The timing of the collective agreements happened to coincide with the timing of the federal election. That was not timing of our choosing.”

Mr. Hahn said he would be talking to teachers’ unions about potentially honouring his union’s picket lines. But leaders of the unions acting for both public, high-school and elementary teachers said their members have a legal obligation to report to work.

The impact of a strike by CUPE members will vary from one school board to the next, as not all support staff across the province are in the union. The Waterloo Catholic District School Board said that if the CUPE strike proceeds, it would close its schools because of safety concerns. The York Region District School Board, and the Thames Valley District School Board in London, Ont., encouraged families to begin making alternate child-care arrangements for next week.

The Toronto District School Board is reviewing its contingency plans, said spokeswoman Shari Schwartz-Maltz, who said that Toronto schools have been kept open during previous job actions.

If a strike were to happen and drag on, it could also affect schools scheduled to have polling stations on site for the Oct. 21 federal election, forcing voters to cross picket lines. Elections Canada says it is making contingency plans in case of a strike, but does not plan to move any polling stations. CUPE’s Mr. Hahn said his members would not "impede the democratic process to allow people to vote.”

Both sides say one of the main sticking points in negotiations is absenteeism. The previous Liberal government reduced the union’s annual sick-day provisions. But workers remain entitled to 11 sick days at full pay and 120 short-term leave days at 90 per cent of their pay.

Mr. Lecce said on Wednesday that sick leave is costing boards $35-million a day. His spokeswoman, Alexandra Adamo, said education workers, including teachers and other support staff, are taking, on average, 15 days.

But CUPE’s Ms. Walton says that average includes people diagnosed with cancer or undergoing surgery. She said the union is willing to discuss the issue, but wants to address what she says are the root causes: violence in schools and injuries caused by overwork in a system that she said is short-staffed and underfunded. 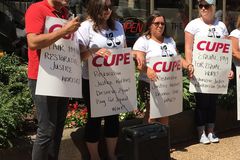