Ontario Premier Doug Ford sat alongside two First Nations chiefs at a Toronto mining conference on Monday, pledging support for an environmental study of a road that would connect to their remote Northern communities and the region known as the Ring of Fire.

Mr. Ford has repeatedly promised to open up the purported mineral riches of the Ring of Fire, 550 kilometres northeast of Thunder Bay, by hopping on a bulldozer himself. But Monday’s announcement included no cash for the road, last estimated to cost $1.6-billion – only a pledge to study it.

Minister of Energy, Northern Development and Indigenous Affairs Greg Rickford also acknowledged that any move to break ground on the construction of the road’s southernmost leg is still as much as two years away. Environmental assessments for the entire route, he said, would take five years to complete.

And despite saying the Ring of Fire’s deposits – mostly chromite, used in stainless steel – would be worth “billions and billions,” the Premier acknowledged that the government had no reliable estimates on whether any of the region’s minerals could be mined profitably.

“Do we put a specific dollar figure [on it]? No we don’t. But do you know what we are talking about today? We are talking about access, the road access that is going to change their lives in the First Nations communities,” Mr. Ford said.

The remote Webequie and Marten Falls First Nations will spearhead an environmental study of the middle portion of the 300-kilometre road, under an agreement signed with Ontario on Monday. They are already leading environmental assessments of the northern and southern legs that link to their respective communities, now accessible only by winter ice roads and by air.

“We are moving ahead with this agreement so all communities in the region can connect to the next phase, which is to secure and bring good-paying jobs in mining, construction and other skilled trades to our communities,” Marten Falls Chief Bruce Achneepineskum said.

According to a confidential memo from the Webequie First Nation obtained by The Globe and Mail, Monday’s deal also includes a recognition of the two First Nations’ authority over their lands and waters and a timeline for future talks on revenue-sharing from any mining development. The deal also involves government support for community projects and to alleviate poverty on the reserves.

But after weeks of blockades and protests spread across Canada in support of the Wet’suwet’en hereditary chiefs in B.C. who oppose a pipeline on their territory, one chief of a First Nation southwest of the Ring of Fire vowed to fight the road.

Chief Chris Moonias of Neskantaga First Nation said the community has not been consulted and that the road crosses a river in their traditional territory: “The community will decide what they’re going to do. They have already said a lot of times that if they have to go out to the land and protect the river, they will.”

Meanwhile, a group of First Nations and mayors, including Sioux Lookout Mayor Doug Lawrance, renewed calls on Monday for a different east-west route for the road they say would be cheaper and connect more communities, something Mr. Rickford said still remained an option.

Toronto-based Noront Resources Ltd. controls more than three-quarters of the mining concessions in the Ring of Fire, but has not yet proven the deposits can be mined for a profit. The company’s shares have fallen by 47 per cent in the past year alone, and are down 97 per cent since their 2008 peak. Critics say there is little market demand for new sources of chromite.

The company’s short-term plan, said Alan Coutts, its president and CEO, is to first build a nickel-copper-paladium mine – only possible once the road is open, still as much as seven years away. Chromite mining would follow if a feasibility study now under way yields a positive result, he said.

The road to nowhere: Claims Ontario’s Ring of Fire is worth $60-billion are nonsense
Subscriber content
October 26, 2019 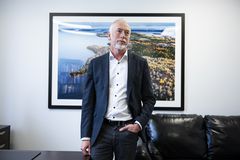 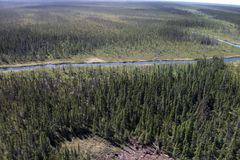 Follow Jeff Gray and Niall McGee on Twitter @jeffreybgray @niallcmcgee
Report an error Editorial code of conduct
Due to technical reasons, we have temporarily removed commenting from our articles. We hope to have this fixed soon. Thank you for your patience. If you are looking to give feedback on our new site, please send it along to feedback@globeandmail.com. If you want to write a letter to the editor, please forward to letters@globeandmail.com.
Comments