The Ontario government sparked confusion and pushback by offering a two-day window of opportunity for the public to comment on electric kick scooters being allowed on the province’s roads.

Under a proposal posted online by the provincial Ministry of Transportation, the province would conduct a five-year pilot project that would allow e-scooters in the same places as bicycles. Speeds would be capped at 32 kilometres an hour and no one younger than 16 would be allowed to ride.

The proposal was put online Wednesday, and initially specified that people would have until Friday to weigh in. Ministerial spokesman Bob Nichols said late Thursday afternoon that the deadline was being extended to Sept. 12. He did not explain the reason for the change and apologized “for any confusion."

The apparent brevity of the comment period was one factor that drew criticism from advocates, as was the length of the pilot, at a time of fast-changing transportation options, and the speed at which e-scooters would be allowed to move.

“It’s a very fast pace for these devices to be travelling, especially if they’re sharing limited space in bicycle lanes and bicycle paths with users that are moving at a slower speed,” said Jaime Stuckless, executive director of the Share the Road Cycling Coalition, which has advocated for a 24-km-an-hour limit for the devices. “The speed is the major concern for us.”

The pilot project proposed by the province follows the introduction of e-scooters into multiple jurisdictions, in many cases prompting the ire of pedestrians who feel endangered and raising concerns among safety advocates.

These e-scooters are sometimes privately owned, but are more likely to be distributed by one of a handful of major firms offering them as short-term rentals. They have popped up in cities around the world but have been largely absent in Ontario, where the current law bars them from both sidewalks and roads.

Attempts to introduce e-scooters without contravening the law include plans for them in Toronto’s Distillery District, a small private neighbourhood, and a continuing pilot in Waterloo, where users are supposed to keep the vehicles largely on a multiuse trail.

Under the province’s proposal, e-scooters would be permitted on roads, “similar to where bicycles can operate.” Mr. Nichols said that it was too early to know whether municipalities would still have the power to set aside road space for bicycles only. He also said there was no definitive date for the pilot to begin.

David Lepofsky, a long-time activist for the visually impaired and chair of the AODA Alliance, which advocates for Ontarians with disabilities, raised concerns Thursday that the process is being rushed. The group argues that the government needs to withdraw this consultation and start over, with a focus on studying and making public the impact of e-scooters on safety, including for disabled people.

Ms. Stuckless, with the Share the Road Cycling Coalition, also suggested that a five-year pilot was unwisely long. Her group has called for a two-year pilot, which she said would be more useful for assessing the latest addition to a dynamic transportation sector.

“Who knows what the next trend is going to be that evolves in the next five years,” she said. “The space is changing pretty quickly.”

The ‘bikelash’ is real: What the war between bikes and cars says about us
August 23, 2019 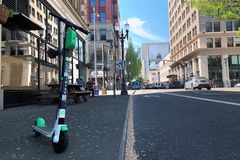 Opinion
Why e-scooters have been on a bumpy ride
August 8, 2019 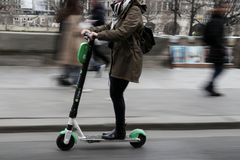