Ontario’s Progressive Conservative government is charting a gradual path to balance in its first budget, keeping a lid on spending increases and promising to take the province into the black only after the next provincial election.

While health care, education and transportation will see modest increases in annual funding, most government ministries will face cuts to their budgets, including the ministries of Environment and Social Services. Sixteen of 22 government departments will see their spending fall this year.

Program expenses will rise over three years by an average of 0.8 per cent, compared with the 3.3 per cent in growth the former Liberal government planned. The size of the deficit was the subject of a dispute between the auditor-general and the previous Liberal government. The Liberals’ previous budget pegged the deficit at $6.7-billion, however the Tories later said it was $15-billion after putting the Liberals’ hydro plan and other assets on the books.

Ontario budget 2019: What you need to know about Doug Ford’s spending plans

Analysis: Despite Doug Ford’s vow to get Ontario’s books in order, this isn’t a Mike Harris budget

In a budget that includes a tax incentive for business investment, a new daycare tax credit and an array of measures that loosen the rules around alcohol, the Progressive Conservative government is taking a measured approach to eliminating a deficit the Tories now peg at $11.7-billion. Under this budget, it will fall to $10.3-billion by next year and hit $3.5-billion in 2022-23. The document projects a small surplus by 2023-24.

Mr. Ford has promised in the past that he would balance the books, but the PC Party platform released during the election campaign did not spell out a timeline. The province’s plan unveiled Thursday will balance the books in five years.

“We have developed a reasonable path to balance,” Finance Minister Vic Fedeli said, describing the plan as “the Goldilocks approach. It can’t happen too quickly, it can’t take too long. It has to be just right.”

While the business community said it had hoped for a promised corporate tax cut, the opposition New Democrats criticized the government for what it saw as deep and painful cuts.

Rocco Rossi, head of the Ontario Chamber of Commerce, said he was disappointed that the government did not follow through on its campaign pledge to reduce corporate taxes by 1 per cent, to match recent tax cuts in the United States. But he said the Chamber of Commerce had lobbied harder for the tax measure for business that was included in the budget: the allowing of faster write-offs for investments in machinery and equipment to encourage job creation.

“Look, we’d love to have both, to be clear,” Mr. Rossi said. “The government has to make its own balance, and they chose the highest priority.”

Although overall spending will increase, it will rise at less than the rate of inflation, which will actually mean a reduction in critical services such as health and education, NDP Leader Andrea Horwath said. She warns that the budget will hurt the province’s most vulnerable people, pointing to long-term spending cuts for social services and Indigenous Affairs.

“We went into this budget expecting deep cuts,” Ms. Horwath said. “What we didn’t expect was the level of irresponsibility and outright cruelty that we’re seeing in this budget.”

The budget revealed significant funding changes for universities and colleges, which are already working to absorb the province’s 10-per-cent cut to tuition. The government is now planning to tie more than half of the institutions’ funding to performance outcomes, although it has not stated what those metrics would be.

The budget also contains a list of measures with little impact on the province’s books, including a new, blue licence-plate design with the slogan “A Place to Grow” and the liberalization of liquor laws to allow tailgating in stadium parking lots, drinking in bars and restaurants at 9 a.m. and, if municipalities choose, drinking in parks. Bars will be allowed to advertise “happy hour” discounted drinks, and the government is “evaluating ways to lower beer costs” at Royal Canadian Legion halls. It also plans to legalize online gambling and allow casinos to advertise free drinks.

While Mr. Fedeli repeatedly pointed to increases in health and education, his political opponents seized on the cuts. The Ministry of Children’s and Social Services, which includes income assistance and the autism program, will see $1-billion in cuts by 2021-22, a decrease of 2.1-per-cent a year, for example. The government says it will achieve the targets through “operational efficiencies and costs savings,” closing unused youth jails and streamlining administration. Other agencies facing major reductions include Legal Aid Ontario, which will see its budget – which is supposed to be $456-million this year – slashed by 30 per cent, with $164-million less to spend a year by 2021-22.

The budget includes a $90-million dental-care program for low-income seniors. And it commits $11.2-billion in provincial money toward an estimated $28.5-billion investment in four rapid transit projects announced for the Greater Toronto Area this week. 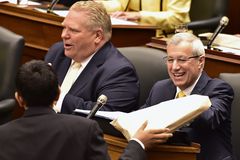