Ontario’s New Democrats and Progressive Conservatives are setting their sights on a majority government – and each other – in the final week of a tumultuous election campaign, offering voters a stark choice in the wake of Liberal Leader Kathleen Wynne’s admission that her party is facing certain defeat.

PC Leader Doug Ford turned his focus on the New Democrats and barely mentioned the Liberals on Sunday, weeks after warning voters that he was in a duel with Ms. Wynne to take over the province at the centre of Canada’s economy. Meanwhile NDP Leader Andrea Horwath insisted she would not strike any deal to work with Liberal legislators if her party wins a minority in the June 7 vote.

“The Liberals have supported privatization, they’ve sold off our public assets and they’ve cut our hospitals. Any party that does that is a party I can’t work with,” Ms. Horwath said, ruling out working with either the Liberals or the Tories if no government forms a majority. “If you want change, but you don’t want Doug Ford, join us,” she said at a rally in downtown Toronto on Sunday.

Hours earlier, Ms. Wynne said she had accepted she won’t be premier after the election and her only goal now is to save as many Liberal seats as possible. With her party languishing in third place in a number of polls, Ontario’s Liberals are facing what could be a catastrophic loss on election night after 15 years in power.

“I don’t know who voters will choose but I am pretty sure that it won’t be me. After Thursday, I will no longer be Ontario’s premier. And I’m okay with that,” Ms. Wynne had said on Saturday, her voice breaking and holding back tears.

Opinion: Why Kathleen Wynne’s early concession was a fitting final act to her campaign

Breaking down the Ontario NDP and PC platforms: What their pricey promises could mean for the province

The Liberal Leader’s admission of defeat, days before the election, is unprecedented in Ontario’s political history and marks the latest shift in an unpredictable campaign. Her unusual admission might help Liberal candidates win in some closely contested ridings but it comes at a time when the party is facing an existential threat, according to strategists.

Mr. Ford said that Ms. Wynne’s announcement will have little effect on his campaign, which he said is now being fought between his right-wing PC Party and Ms. Horwath’s left-wing NDP. “This election will change the course of our great province and the stakes couldn’t be higher,” Mr. Ford said during a campaign stop near Kingston.

On Sunday, Ms. Wynne continued campaigning despite her admission that defeat is now unavoidable. Appearing behind a sign that simply read “Vote Liberal” instead of her usual campaign slogan of “Care over Cuts,” Ms. Wynne said voters need to elect Liberals to ensure her competitors can’t form a majority government. She called the two parties “too extreme” for Ontario.

I don’t know who voters will choose but I am pretty sure that it won’t be me.

Telling her supporters that the election is too close to call, Ms. Horwath ruled out the Liberal Leader’s call for a minority government. “Doug Ford doesn’t need to be kept in check after Election Day. He needs to be defeated on Election Day. Only by voting NDP can we do that,” Ms. Horwath said.

Ms. Wynne’s announcement on Saturday sent a shock throughout the Liberal campaign. Some candidates and their campaigners were baffled and angered by her decision to effectively concede the election with only five days to go, according to one Liberal Party source who spoke on condition of anonymity because he was not authorized to speak publicly on behalf of the party. The move was incomprehensible, he added.

The Liberal leader held a conference call with her candidates on Saturday morning, however most Liberals learned of her move when her campaign event appeared on television. Ms. Wynne said she had been discussing the announcement with her inner-circle for a number of days.

Some strategists said the move could help convince voters to support Liberals. “I’m not surprised by this, it’s grounded in the reality of the immediate moment, but it’s an unusual move,” said John Duffy, an informal adviser to the Liberal campaign who served on Ms. Wynne’s 2014 campaign team.

“In effect it says to Ontarians, you’re going to get the change you so obviously want, you’ll get a new government and it won’t be a Kathleen Wynne Liberal government, but there are lots of aspects of what comes next that you might not want.”

Henry Jacek, political science professor at McMaster University, said that many Liberal voters will now see Ms. Wynne’s move as permission for them to vote NDP. “It could be a catastrophic result for the Liberals,” he cautioned.

Inherit the Wynne: The economic challenges of Ontario’s next premier
Subscriber content
June 3, 2018 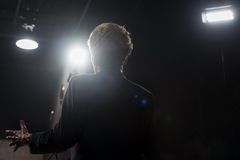