Premier Doug Ford says Ontario is preparing for the “gradual” reopening of the economy as new modelling shows the province has likely reached its peak in the COVID-19 pandemic, even as the situation in long-term care homes continues to worsen.

Mr. Ford said Monday that his jobs and recovery committee, made up of key cabinet ministers, has begun to develop a framework for a “gradual, measured and safe” reopening of the province, while cautioning that physical distancing and self-isolation measures must remain in place for weeks if not longer.

“Absolutely in no way is this fight over,” the Premier said at Queen’s Park. "We aren’t there yet. ... But we want to make sure we give people hope.”

New projections, released by provincial health officials on Monday, say Ontario is now expected to have fewer than 20,000 cases of the novel coronavirus, substantially lower than the 80,000 projected by previous models.

Matthew Anderson, president and CEO of Ontario Health, said the new projections show that physical-distancing measures implemented weeks ago are working at reducing the spread of COVID-19 in communities.

The numbers in long-term care homes, however, continue to grow.

According to the latest model, at least 367 of the province’s 591 deaths have been in long-term care – more than 60 per cent. The numbers do not include group homes or retirement homes.

There are now 127 outbreaks at the province’s 626 long-term care homes, according to official numbers, but the number is much higher if suspected outbreaks and those not yet reported to the province are included.

New research has found that nursing-home residents over the age of 69 were 13 times more likely to die of COVID-19 than people in the same age group living elsewhere.

David Fisman, an epidemiologist at the University of Toronto’s Dalla Lana School of Public Health, and four of his colleagues analyzed confirmed and suspected coronavirus outbreaks at 272 of the province’s 626 long-term care homes as of April 7.

Along with the thirteenfold difference in COVID-19 death rates among people 70 and older, the researchers discovered that people 80 and older were eight times more likely to die of COVID-19 if they lived in long-term care.

The research also found the COVID-19 deaths in nursing-home residents most often followed confirmed infections in staff. The more workers tested positive, the likelier the home was to record a death soon after.

Ontario recently passed an order limiting long-term-care staff to working in one home, but it does not apply to temporary or contract workers. The province also says it is sending in hospital “SWAT” teams of medical professionals to help homes, including 70 volunteers from Toronto’s University Health Network, and says guidelines for personal protective equipment are also being followed. On the weekend, 21 homes received “much needed supports,” the Ministry of Long-Term Care said.

On Monday, NDP Leader Andrea Horwath called on the government to immediately take over direct management of long-term care facilities where residents are not being protected, to restrict all workers in congregate-care settings – including temp agency workers – to one facility only, and to raise wages to $22 an hour for care-home staff.

But Merrilee Fullerton, Minister of Long-Term Care, has rejected calls to take over such facilities, including two of the hardest-hit homes in the province. At Eatonville Care Centre in Toronto and Anson Place Care Centre in Hagersville, at least 58 residents have died and 185 have been made ill by COVID-19.

“Since Day 1, we’ve been on this. And it is not a lack of preparation from my perspective," Dr. Fullerton said Monday.

Health officials across Canada introduced physical-distancing measures, including closing schools and non-essential businesses, last month to slow the spread of COVID-19 infections. The goal was to prevent the health care system from becoming overwhelmed with a surge of patients, and while Ontario continues to see hundreds of new cases each day, officials and experts say that, over all, the outbreak appears to be largely under control in communities.

But officials and experts say it is still too early to relax physical distancing, as doing so would lead to a spike in new cases.

“Everyone needs to continue to stay home as much as possible, maintain physical distancing, to ensure that the province continues to stop the spread of COVID-19 and flatten the curve,” said Barbara Yaffe, Ontario’s associate chief medical officer of health.

In order for provinces to begin opening back up, Dr. Fisman said they will need to figure out ways to maintain suppression of new COVID-19 cases. This will hinge on widespread testing and better surveillance, such as entry screening at hospitals and monitoring infection risk in children if schools open again, he said.

With reports from Carly Weeks and Kelly Grant. 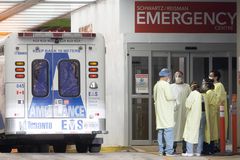 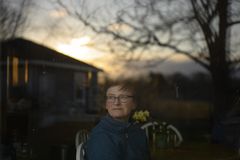 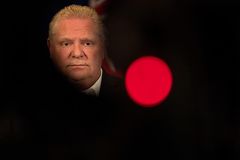