The union representing thousands of public high-school teachers in Ontario said Tuesday it will hold strike votes in the coming weeks, blaming the Progressive Conservative government for what it calls a failure to address key issues in contract talks.

“After five days of bargaining in total … the government and school boards have refused to engage in any substantive discussions,” he said.

Mr. Bischof said more bargaining dates are scheduled later this month and in early November, but added the strike vote doesn’t necessarily mean teachers will walk off the job.

“Lest anybody believe we are signalling some break off of negotiations, no, that’s not the case at all,” he said.

Contracts for most of Ontario’s education-sector workers expired on Aug. 31 and negotiations are at various stages.

Education Minister Stephen Lecce said in a statement that a strike action would hurt students, especially the most vulnerable in the classrooms.

“My message to our labour partners is to always put kids first, and continue to work with us in good faith to make sure kids remain in class each and every day,” he said.

Last week, the union representing 55,000 education workers in Ontario reached a tentative deal with the government shortly after giving a strike notice. Under the deal, CUPE agreed to a 1-per-cent wage increase and secured millions in government funding to restore as many as 1,500 jobs cut by the Tories.

Finance Minister Rod Phillips has said that the province will stick to its plan to cap public-sector wage increases as it enters key contract talks with teachers.

The OSSTF has opposed the wage increase cap, instead asking for a “cost-of-living adjustment” based on a formula linked to the Consumer Price Index. The current rate of that increase would come in around 2 per cent, but that could change if the economy sputters, the union argues.

Mr. Bischof said the government is refusing to engage in meaningful discussions about some of the most important issues, including staffing levels in schools.

Earlier this year, the government ordered school boards to start increasing class sizes, moving to an average for high school to 28 from 22 students over four years. Class sizes for grades 4 to 8 will increase by one student a classroom, to 24 from 23.

Ontario’s Financial Accountability Officer has said the move would see 10,000 fewer teachers in the public-school system over the next five years.

The high-school teachers’ union recently took the rare step of releasing all of its bargaining proposals in a bid to have “transparent” negotiations with the government.

“It’s a really sad state of affairs if the government and Minister of Education are not rolling up their sleeves and working hard to try to deal with the substantive issues and impact our children’s education,” she said.

Green Party Leader Mike Schreiner urged the government to address the concerns raised by the teachers in good faith negotiations.

“I commend the union for being transparent about their bargaining position and for making it clear that cuts to education are a direct threat to high-quality public education,” he said in a statement. “Now it’s the government’s responsibility to listen and be willing to back away from their cuts.”

This report by The Canadian Press was first published Oct. 15, 2019. 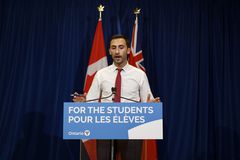 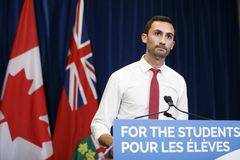