The defence of extreme intoxication in sexual-assault cases is back in Ontario, after a judge ruled that a federal law removing it violates the constitutional rights of the accused.

The ruling comes in a case in which a man voluntarily took a substance commonly known as a date-rape drug, then said he didn’t know what he was doing when he had sexual intercourse with a woman who was waking from a drunken sleep.

The decision by Ontario Superior Court Justice Nancy Spies this month means that a federal attempt to undo one of the most controversial Supreme Court rulings of the past quarter-century is no longer on the books in the province. The Supreme Court ruled in 1994 that drunkenness so extreme as to be akin to automatism is a defence to sexual assault. The decision by an Ontario judge does not apply directly to other provinces.

Justice Spies’s ruling, made before trial at the request of accused Cameron McCaw, gives him a possible defence on a charge that he sexually assaulted a woman in a Toronto apartment. He must now prove it is more likely than not that he was intoxicated to the point of automatism – a robotic state in which he was not aware of his actions. Proceedings continue Sept. 12.

Mr. McCaw acknowledged in a court document that he had sexual intercourse with the complainant, but said he had not “intended to do so.” He said he had consumed alcohol, marijuana and a date-rape drug. The complainant had been drinking heavily and passed out on a couch. She said she awoke with Mr. McCaw on top of her in the middle of the night.

Justice Spies wrote in her decision that the federal law relieves the prosecution of having to show that an accused voluntarily committed a sexual assault. It thus violates the right to be presumed innocent, and the right to fundamental justice, wrote Justice Spies.

It is not the first time an Ontario Superior Court judge has ruled that the law ending the self-induced intoxication defence is invalid; it happened in 1999 and again in 2010. But Crown prosecutor Patricia Garcia argued that judges of the same level are free to decide that they are not bound by the precedent. Justice Spies disagreed, saying the law’s unconstitutionality is no longer open for argument, and has not been since 1999. She also examined the law itself, in case she was wrong on that point, and said she shared the view that it is unconstitutional.

A prominent legal organization said it fears Justice Spies’s ruling will put women at greater risk – particularly those who are also intoxicated and who are targeted in the kind of environment in which the defence of intoxication is likely to be raised.

“Accordingly, we are very concerned that allowing accused individuals to rely on this defence will pose yet another barrier to justice for women who are sexually assaulted while intoxicated, and will exacerbate the vulnerability to violence of an already disproportionately targeted group,” Karen Segal, staff counsel at LEAF (Women’s Legal Education and Action Fund), told The Globe and Mail in an e-mail.

Jennifer Trehearne, a criminal lawyer not connected to the case, said the ruling was just. “The bottom line is, choosing to get drunk is not as bad as choosing to commit a sexual assault,” she said in an interview.

“If you really are so impaired that you don’t know what you’re doing, you can’t be found guilty for an offence that requires an intention.”

In 1994, the Supreme Court of Canada ruled 6-3 that intoxication to the point of automatism is a defence to sexual assault. The court upheld a trial judge’s acquittal of a chronic alcoholic, Henri Daviault, who had sexually assaulted a 65-year-old woman, dragging her from a wheelchair to her bed. The court said sexual assault is not morally equivalent to being extremely drunk, and “voluntary intoxication is not yet a crime.” It also said successful uses of the defence would be rare, citing studies from Australia and New Zealand.

In the face of a public uproar, a Liberal government acted quickly, passing a law nine months later abolishing the defence of self-induced intoxication in crimes involving assault. The law’s preamble says the purpose is to hold individuals accountable for violence against women and children. It also says most intoxicants do not cause people to act involuntarily.

Courts have had mixed reactions to the law. In four cases since 1995, courts in British Columbia, Quebec and Nunavut have upheld its constitutionality. In five cases in the Northwest Territories and Ontario, judges ruled it invalid. But none of these decisions has gone to a provincial appeal court, leaving uncertainty about whether other superior court judges may reach their own conclusions about the automatism defence.

Nova Scotia judge who said ‘a drunk can consent’ cleared of misconduct over sexual-assault ruling
April 4, 2018 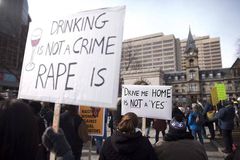