The Ontario Liberals are set to unveil a pre-election budget with billions in new spending, including a plan to provide fully government-funded child care for preschoolers by 2020.

Following a week of significant spending promises, Premier Kathleen Wynne announced another big-ticket item Tuesday: $2.2-billion over the next three years to provide child care from the time children turn 2½ until they are eligible for kindergarten.

“No more anxiety about costs. And the freedom to choose when it’s time for Mom or Dad to go back to work. This is a big change,” said Ms. Wynne, making the announcement at a Toronto school alongside Finance Minister Charles Sousa and Education Minister Indira Naidoo-Harris.

“We’re playing the long game here, folks. This is an investment in the people of this province,” said the Premier, who added that some women will now consider having a second and third child. The plan is expected to save families about $17,000 per child annually.

While the plan was mocked by opposition politicians as too little, too late – after all, child-care expenses have exploded during Ms. Wynne’s time in power and sit at almost $20,000 a year in certain areas of the province – a number of experts said it was a good first step to create a more accessible child-care system.

In recent weeks, Ms. Wynne has said that a more comprehensive child-care program would help close the gender wage gap, as women will get more control over their return to work.

After five years as Premier, Ms. Wynne faces a challenging campaign for re-election this spring, as her party’s popularity has trailed far behind that of the opposition Progressive Conservatives for well over a year.

On Wednesday, Mr. Sousa is expected to table a budget with a deficit of as much as $8-billion.

The new child-care program, which would cover the costs for as many as 125,000 preschoolers by the time it is fully in place, by 2023-2024, would fund full-day and licensed child care for about 1½ years – until a child enters kindergarten between the ages of four and five.

However, the proposed system will not cover the crucial and expensive care for infants long after most parental leave programs expire.

While she welcomed the government’s new program as a step forward, Brooke Richardson, an instructor in Ryerson University’s early childhood education program, said that is a flaw in the plan that could leave many families making the hard decision between staying home with their child or paying for expensive child care.

“Big social programs like this need to be rolled out over time and they need to start somewhere. Promising free care for all children would be a lot, maybe biting off more than we can chew. But I’d like to see it expanded to all younger children in the future,” she said.

“This announcement does nothing for those women who are trying to get back to work after their parental leave,” said NDP Leader Andrea Horwath. “You’ll have to ask Kathleen Wynne why she chose some families over others in terms of helping them with their child-care costs.”

Lisa MacLeod, the finance critic for the official opposition Tories, compared Ms. Wynne to Oprah Winfrey but said the Premier does not have the entertainer’s money. “Kathleen Wynne has had 15 years to fix the problem and she’s made it worse,” she said. “And now [she’s come forward] in an 11th-hour Hail Mary announcement today with money she doesn’t have.”

Laurel Rothman, a spokeswoman for the Ontario Coalition for Better Child Care, called the announcement a “game changer that will transform child care for families and for early childhood educators.” She said she was “stunned” with how far the Liberals have moved.

“Often it’s women … putting careers on hold, putting education on hold because they can’t find or afford child care. This will be a major change for families,” she said.

Charles Pascal, the architect of the province’s early learning plan and a professor at the Ontario Institute for Studies in Education at the University of Toronto, said child care should be part of the public education system. He said Tuesday’s announcement is a “remarkable extension of full-day kindergarten” introduced earlier by Ms. Wynne’s government.

“High-quality child care provides developmentally enriched opportunities for children and is therefore educational. It is a further extension of kindergarten and the continuum of education,” said Mr. Pascal, a former Ontario deputy minister of education.

Martha Friendly, the executive director of the Toronto-based Childcare Resource and Research Unit, said she was expecting a sliding-fee scale like the one used in Quebec and was pleasantly surprised to learn that the Liberals want to introduce a free program.

Ms. Naidoo-Harris said the government decided against small fees to make the program simpler and less stressful for parents.

Child care is not free even in countries with good publicly funded systems. Germany, France, Norway – even Sweden, which is typically considered the gold standard – have variations on a sliding-fee scale, so families pay based on their income, albeit with a cap that would make Canadian families envious. 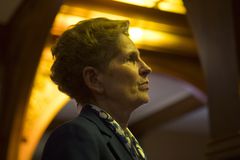 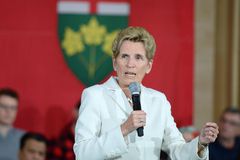 Follow Justin Giovannetti, Caroline Alphonso and Erin Anderssen on Twitter @justincgio @calphonso @ErinAnderssen
Report an error Editorial code of conduct
Due to technical reasons, we have temporarily removed commenting from our articles. We hope to have this fixed soon. Thank you for your patience. If you are looking to give feedback on our new site, please send it along to feedback@globeandmail.com. If you want to write a letter to the editor, please forward to letters@globeandmail.com.
Comments are closed