Premier Doug Ford defended the lifting of a stay-at-home order for most of Ontario on Tuesday amid warnings it could lead to a third wave of COVID-19.

“We aren’t reopening the province,” he said as Ontario’s legislature began its spring session.

Twenty-seven regions moved back on Tuesday to the colour-coded pandemic restrictions system used prior to a provincewide lockdown that began on Boxing Day.

Niagara Region was the only one to move to the strictest grey-lockdown category, which allows most businesses to open at 25 per cent capacity.

The rest of the regions, most of them outside the Greater Toronto Area, fall elsewhere along the scale that moves from red – the second-most strict level – through green, with lighter restrictions on businesses and gatherings at each stage.

In Durham Region, which was placed in the red category, residents were seen lining up outside businesses that were allowed to reopen. The owners of some of those businesses said they were working hard to make up for lost time.

Jaquelyn Giles, owner of Caryl Baker Visage in Pickering, Ont., said she was glad to be back in her salon on Tuesday.

In between phone calls with clients looking to book appointments, she said she was worried about how long she would be able to stay open before cases rose and businesses were ordered to shut down once more.

“We have a really loyal clientele so I think they’ll come in and see us, but my only concern is that we’re just going to close down again,” said Giles. “Everyone’s talking about that happening again already.”

Dave Curtis, manager of Sunrise Records at Pickering Town Centre, said he was glad to be back at work and that it was nice to see happy customers again.

He noted, however, that there is a backlog of work after seven weeks out of the store.

“We have to update things, there’s still Christmas stuff on the wall. Dec. 24, we were gone,” said Curtis. “But that’s over the next few days and there’s new promotions starting too.”

Toronto, Peel Region, York Region and North Bay Parry Sound are set to remain under the stay-at-home order until at least Feb. 22.

NDP Leader Andrea Horwath accused Ford of ignoring the advice of medical experts who have warned of a possible third wave if stay-at-home orders don’t remain in place.

“It seems pretty clear that what this is all about is transitioning into a disaster,” Horwath said on Tuesday.

During a briefing on COVID-19 projections last week, the province’s science advisory group, said that while cases have been decreasing, more contagious variants are spreading and currently account for five to 10 per cent of all cases.

That will likely cause cases to increase again by late February, the advisory group said, which is why strong public health measures like a stay-home order and vaccination of vulnerable groups are important.

The top doctor in Simcoe Muskoka region asked residents to continue limiting their contacts as much as possible Tuesday as provincial restrictions were loosened in the region.

Dr. Charles Gardner flagged a number of outbreaks linked to the B.1.1.7 variant, or likely variant cases awaiting confirmation, including several institutional outbreaks and one at an apartment complex.

While the B.1.1.7-driven outbreak at Roberta Place long-term care home in Barrie, Ont., – which has killed more than 70 people and infected more than 200 – is nearly declared over, Gardner pointed to a growing outbreak at Waypoint Centre for Mental Health Care, where seven people had died as of Tuesday and 31 had been infected.

There was also news Tuesday of the first variant case reported in Muskoka, a sign that the variant may be spreading further in the region.

Gardner urged people to continue staying at home even after the province moved the region Tuesday to the “red” zone of the pandemic framework, which allows more businesses, including restaurants, to reopen.

“I’m concerned about the potential for spread and I still feel that it’s very important that people abide by a stay-at-home approach,” Gardner said at a pandemic briefing Tuesday.

Full results of a Public Health Ontario study of new COVID-19 variants’ prevalence were released Tuesday, showing that 4.4 per cent of all COVID-19 infections reported Jan. 20 in Ontario were variant cases.

The agency has since ramped up screening for three “variants of concern” by looking at every positive COVID-19 sample for a common mutation” to isolate probable cases for further screening.

As of Tuesday, provincial health officials said variants are being detected approximately seven per cent of all positive cases.

She repeated Ford’s assertion that the changes in public health rules are not a reopening, and said people shouldn’t be complacent.

“If we let loose we’re going to see another pandemic wave,” she said.

One shot to protect us all: Canadian scientists’ quest to develop a vaccine that fights all types of coronavirus
February 16, 2021 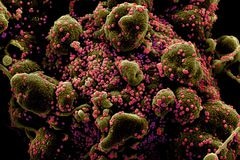 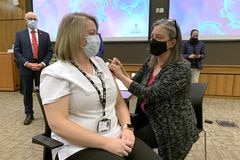 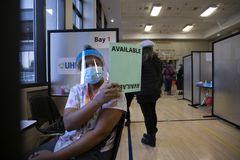