Some of the people found guilty by juries in Ontario in recent months are quickly taking steps to challenge their convictions in light of a new ruling on jury selection by the province’s top court.

One of two men convicted in a high-profile sexual assault trial in Toronto filed a notice of appeal on Thursday, referencing the Court of Appeal for Ontario ruling released that same day.

Gavin MacMillan is seeking to have his conviction overturned on grounds the trial judge erred in denying him the right to use peremptory challenges during jury selection.

The federal government eliminated the use of peremptory challenges, a mechanism through which lawyers on either side can veto a certain number of prospective jurors without explanation, as part of major legal reforms that took effect on Sept. 19 of last year.

In a unanimous decision issued Thursday, the appeal court said the new rule should not be applied to cases already in the system in which the accused requested a trial by jury before the law came into force.

Legal experts have said the ruling could affect dozens of cases heard by juries in Ontario since the changes took effect.

Mr. MacMillan and his co-accused, Enzo DeJesus Carrasco, were found guilty on Nov. 30 of last year of gang sexual assault and administering a drug in connection with the Dec. 14, 2016 incident.

Prosecutors alleged the pair drugged then sexually assaulted a woman for hours at the College Street Bar, a now-shuttered venue that Mr. MacMillan owned and where Mr. Carrasco worked.

The Crown argued hours of security footage shown at the trial depicted a brutal sexual assault, while the defence argued the video had captured a consensual encounter. The video did not include sound.

A sentencing hearing for Mr. MacMillan is scheduled for next Wednesday.

In his notice of appeal, Mr. MacMillan also alleges the trial judge erred in dismissing his lawyers’ application to introduce evidence related to the complainant’s sexual history, and in admitting expert evidence as to whether the complainant consented to the sexual activity at the heart of the case.

Dozens of Ontario criminal convictions at risk after Court of Appeal ruling on juries
January 23, 2020 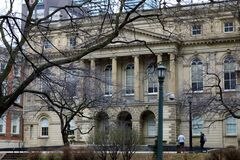