Ontario is setting up checkpoints at its land boundaries and enhancing police powers to enforce its stay-at-home order as modelling warns that new COVID-19 infections could rise to more than 10,000 a day.

But the series of additional measures unveiled by Premier Doug Ford on Friday were roundly criticized by medical experts and opposition politicians, who expressed concern that police would abuse their new powers.

Critics have long said that the government should have acted sooner on previous warnings about a surging third wave – and many suggested that the latest measures would do too little to curb the runaway spread of new variants of COVID-19.

Ontario, which registered a record 4,812 new infections on Friday, had already shut its schools and implemented a four-week stay-at-home order that banned shopping at non-essential stores and closed restaurants to in-person dining. That stay-at-home order, due to end May 5, will be extended for another two weeks.

The government is giving police and bylaw officers temporary powers to stop anyone on the street or in their cars to ask why they are not at home, and to provide an address.

Ontario is also shutting down some non-essential construction sites, including those where new shopping malls and office towers are being built. And it is cracking down on outdoor activities, ordering golf courses, basketball courts and playgrounds closed – even though many public-health experts have encouraged outdoor activities, saying that the virus is less likely to transmit there.

“We have to do more,” Mr. Ford said. “The reality is there are few options left.”

But the government declined to enact a curfew, which was an option under discussion. It also did nothing to shut down or impose new restrictions on factories or warehouses, where the virus has been spreading among essential workers.

And despite repeated calls from public-health experts, the government’s own science advisers, local mayors and opposition leaders, Mr. Ford did not announce any enhancement to the federal sick-pay program. That program has been roundly criticized for failing to adequately cover the lost paycheques of workers who need to get tested or self-isolate.

Ontario Liberal Leader Steven Del Duca called the new police powers “martial law,” while Toronto Mayor John Tory said they had him “very concerned.” Toronto Police said they were reviewing the orders and would notify the public before starting to enforce them.

Michael Bryant, the former Ontario Liberal attorney-general who heads the Canadian Civil Liberties Association, warned that the new powers allow “legalized racial profiling” and will end up disproportionately affecting the many racialized workers in essential businesses who have been hardest hit by the pandemic.

“The self-employed and wealthy, working from home, are not going to be facing risk of random police stops,” Mr. Bryant said. “It’s going to be the vulnerable – it always is.”

Ontario has asked all other provinces for help with staff in its overwhelmed intensive-care units, even though many face crises of their own. It declined on Friday to make use of Red Cross workers offered by Ottawa to help with vaccinations.

Mr. Ford asked Ottawa to provide more vaccines, and to enhance COVID-19 border security. He also said his government will redirect 25 per cent of its vaccine supply to 13 hardest-hit regions, particularly in the Greater Toronto Area.

Most of the province’s new restrictions come into effect on Saturday at 12:01 a.m. Beginning Monday, Ontario will put up checkpoints at land boundaries with neighbouring Manitoba and Quebec to prevent non-essential travel.

New modelling released Friday warns that doctors in Ontario’s overflowing hospitals, no matter what measures are put in place, could soon be forced to deny life support to patients deemed least likely to survive.

The modelling projects that the province could have 1,500 to 2,000 COVID-19 patients in intensive-care units by mid-May. That’s more than double the 700 ICU patients with the virus that have already stretched the system to the brink.

The projections, released by the province’s external COVID-19 Science Advisory Table, say that with current rates of vaccination, and a six-week stay-at-home order, daily new infections would hit slightly more than 10,000 by the end of June.

Even stronger measures could bring the number down further and faster. But with just a four-week-long order in place, infections could have rocketed north of 15,000 a day. And without any of the measures brought in this month, the province could have seen a staggering 30,000 new daily cases in just weeks.

Andrew Morris, an infectious-disease physician at Toronto’s University Health Network who sits on Ontario’s science table, called the government’s announcement “mind-boggling,” and said it missed the mark entirely. Dr. Morris said the government needed to put in place stronger protections for essential workers, including enhanced paid sick leave, and shut down more workplaces. He said the move to limit outdoor recreational activities was a “total repudiation of science.”

Patrick Brown, the mayor of Brampton, one of the three municipalities that make up Peel Region, said that factories in his jurisdiction are hotbeds of COVID-19 that need to be shut down or targeted by a more concerted vaccine push to protect workers.

“I know hot spots are getting an additional 25 per cent vaccines, according to today’s announcement,” Mr. Brown said. “That doesn’t do nearly enough.”

With reports from Oliver Moore and Molly Hayes 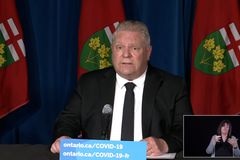