The Ontario NDP wants provincial election officials to investigate any possible links between the Progressive Conservative government and an obscure group called Vaughan Working Families, which was behind a series of pro-government newspaper ads.

The ads, which ran last weekend in The Globe and Mail, the Toronto Star, the National Post and the Toronto Sun, echo the government’s language in its labour dispute with the province’s teachers and accuse the unions of using students as “pawns.” The ads appeared just after talks between the government and the unions broke down and teachers vowed to continue an escalating series of one-day walkouts.

A spokeswoman for Education Minister Stephen Lecce – who represents a Vaughan riding – said Mr. Lecce had no role in or any knowledge of the ads before they ran. The office of Premier Doug Ford and the PC Party also issued similar statements.

On Friday, NDP MPP Peter Tabuns wrote a letter to Greg Essensa, Ontario’s Chief Electoral Officer, calling for an investigation into whether Vaughan Working Families was working “in collusion” with the PC government, which Mr. Tabuns said would violate the Election Finances Act.

Under the act, third-party political advertisers are not allowed to “act in co-ordination” with political parties or candidates. The NDP has also raised concerns that the ads ran as two Ottawa-area by-elections are under way. Elections Ontario said Friday it does not comment on investigations.

The name Vaughan Working Families was registered in 2018 by a corporation called Vaughan Health Campus of Care. According to corporate records, the corporation’s president is prominent Toronto-area developer Michael DeGasperis, a donor to the PC Party. Mr. DeGasperis did not respond to requests for comment.

The lawyer who registered the name, who is also listed as a director of Vaughan Health Campus of Care, is Quinto Annibale, a large donor to the PC Party whom the Ford government has named vice-chairman of the Liquor Control Board of Ontario.

In a story published online Thursday evening, the Toronto Star reported that invoices for the ads had been sent to the offices of Mr. Annibale’s Etobicoke law firm, Loopstra Nixon LLP. The law firm’s address is also the listed address for Vaughan Health Campus of Care. Full-page ads would typically cost tens of thousands of dollars each.

Mr. Annibale did not respond to requests for comment. On Friday, the law firm’s managing partner, Allan Ritchie, issued a statement saying that Mr. Annibale serves on the board of Vaughan Working Families/Vaughan Health Campus of Care in his personal capacity. The statement said the views expressed by the group were not those of the law firm or its staff, which hold a “wide variety of political opinions.”

Mr. Tabuns acknowledged he had no evidence that the government was involved in co-ordinating the ads. But he said the situation warranted a probe.

“The story that Lecce and the Ford government knew absolutely nothing about a six-figure campaign run by a party insider is simply not believable,” Mr. Tabuns told reporters at Queen’s Park.

According to corporate records, Vaughan Health Campus of Care was established in 2007. The organization was set up to lobby for a new hospital in Vaughan, aiming to raise private- and public-sector funds for it and seeking to be involved in its construction. But the advocacy group became embroiled in a tangled dispute with the city and the province over its role in the development of some of the land earmarked for the facility.

In addition to Mr. DeGasperis and Mr. Annibale, the other listed directors of Vaughan Health Campus of Care are: Sam Ciccolini, co-founder of Toronto construction insurance firm Masters Insurance and a well-known philanthropist; Robert Colelli, a senior vice-president of the commercial real-estate firm Cresa; and Robert Maggisano, an affiliate scientist in cardiac and vascular surgery at Toronto’s Sunnybrook Hospital. None responded to repeated requests for comment this week.

All have donated money to the PC Party in the past. Mr. Annibale and his professional corporation have given more than $30,000 to the PC Party and various PC candidates since 2014, according to Elections Ontario’s financial contributions database.

Mr. DeGasperis has donated to both the Liberals and Progressive Conservatives. Mr. Ciccolini has given nearly $11,000 to the PC Party or its candidates since 2014, while Mr. Colelli and Dr. Maggisano each donated smaller amounts.

Alexandra Adamo, a spokeswoman for Mr. Lecce, said the minister had not spoken to any of the men about the ads: "The Minister was not involved or aware of the creation of these advertisements.”

According to Elections Ontario, Vaughan Health Campus of Care was registered as a third-party political advertiser in 2018 and in 2014. Elections Ontario says third-party advertisers must register upon spending $500 during an election period. The group spent just $5,922 from May to September of 2018 on third-party political activity, according to election records, and $83,768.27 from May to September, 2014.

Vaughan Health Campus of Care made headlines in 2011 when critics seized on a move by the then-Conservative federal government to pledge $10-million toward the group’s efforts to develop plans for ancillary health-care facilities that would accompany the new hospital. The grant money was promised just after local Conservative MP Julian Fantino won a 2010 by-election. Mr. DeGasperis and Mr. Ciccolini were both fundraisers for Mr. Fantino’s campaign, according to media reports at the time.

But as Vaughan Health Campus of Care’s vision ran into various obstacles, it would only end up receiving $1.2-million of the federal funding, which it spent on consultants to draw up its plans, the Vaughan Citizen reported in 2012.

Mr. Lecce, a former aide to prime minister Stephen Harper, worked as campaign spokesman for Mr. Fantino in 2011. Reached this week, Mr. Fantino – who left politics in 2015 after losing his seat – said he did not know who was behind Vaughan Working Families.

The Globe and Mail declined to comment on the ad. Calls or e-mails to the Star and Postmedia, owners of the Sun and the National Post, were not returned. The Star has said the ad did not meet its standards and slipped through inadvertently. 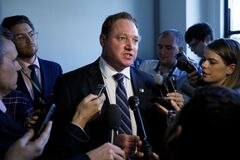