From the outside, it appeared like a stinging defeat. Until earlier this week, some polls had the NDP essentially tied with the Progressive Conservatives in the popular vote. But long-time organizers for Ontario’s New Democrats saw Thursday’s results as a huge gain for a party accustomed to coming in third place.

At the Hamilton Convention Centre, where volunteers gathered for NDP Leader Andrea Horwath’s campaign party, a hush fell over the room after broadcasts declared a majority for Doug Ford and the Progressive Conservative Party. Still, the crowd perked up as results showed big NDP gains, particularly in Toronto and Windsor.

A crush of supporters and cameras surrounded Ms. Horwath as she made her way to the podium. “We have won more seats than we have held in a generation,” she told the cheering crowd. “I am deeply humbled that Ontarians have asked us to serve as the new Official Opposition.”

“This is not a replay of 2015,” she said. That was the federal election in which then-NDP leader Tom Mulcair launched his campaign with what looked like a clear shot of becoming prime minister. By election night, support had collapsed, and the party came in third. To NDP members, it’s still known as the night that sparked “an existential crisis,” Ms. Monk said.

This time around, Ms. Horwath and the Ontario NDP launched their campaign as clear underdogs, holding just 18 seats in the legislature. By Thursday night, they appeared poised to at least double their seat count – likely the most won by the party since the only time it formed government, under Bob Rae in 1990. The election results also hand the NDP the role of Official Opposition.

On a practical level, this will translate into heightened influence at Queen’s Park. The role of Official Opposition gives the NDP a much bigger platform in the legislature – seats on committees and, in some cases, the ability to chair committees.

“They do have more of a leadership role,” said David Wills, a senior vice-president at Media Profile who was not involved with the Horwath campaign but has worked on past NDP campaigns. “And they set the tone and pace for holding the government to account.”

Changes made by the Ontario Liberal government last year also mean political parties now receive subsidies based on the amount of support they receive.

In the longer term, NDP members hope Thursday’s results – and the collapse in Liberal support – will represent a fundamental shift in the political landscape.

This translated into wins in crucial ridings such as Brampton East, where roars of joy and dancing broke out as Gurratan Singh (the brother of federal NDP Leader Jagmeet Singh) was announced the winner.

“I think the result is clear evidence the NDP is here in a very meaningful way,” he said.

Brad Lavigne, a senior adviser to Ms. Horwath’s campaign, said the results position the party as a real alternative to the PCs. “It’s realigning Ontario politics in a significant way.”

As for whether Ms. Horwath – who has now led the NDP through three general elections – will stay on as leader in the long term, most supporters seemed to think it’s likely.

“She is the most celebrated leader in Ontario’s New Democratic Party history,” said Ms. Monk.

Mr. Jacek agreed. He said that aside from a few prominent caucus members – long-time MPPs such as Gilles Bisson, Peter Tabuns and France Gélinas – the NDP doesn’t have many stars who would be obvious contenders as new leaders.

Plus, he added, the NDP hasn’t traditionally rushed to replace leaders, partly because they understand that the public views them as the third-place party.

“The NDP – they know their leader has a hard road ahead,” he said. 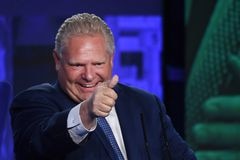 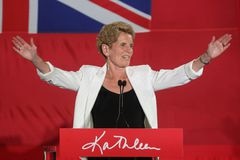 Follow Ann Hui and Jeff Gray on Twitter @annhui @jeffreybgray
Report an error Editorial code of conduct
Due to technical reasons, we have temporarily removed commenting from our articles. We hope to have this fixed soon. Thank you for your patience. If you are looking to give feedback on our new site, please send it along to feedback@globeandmail.com. If you want to write a letter to the editor, please forward to letters@globeandmail.com.
Comments