Ontario Progressive Conservative MPP Ross Romano says he was not aware that a top donor to the party gave money to Patrick Brown’s girlfriend for work on his by-election campaign.

Mr. Romano, who represents Sault Ste. Marie, said he found it “concerning” to learn about a $5,000 payment to the girlfriend of then PC leader Mr. Brown in May of 2017 in The Globe and Mail on Tuesday. Mr. Brown told Gursharan (Bobby) Sidhu to pay the $5,000 in addition to $2,000 to an unnamed individual for campaign work in Sault Ste. Marie, according to court documents unsealed after an application by The Globe and CTV.

“I do not know who that individual is, Mr. Sidhu, and I am not aware of any of these payments,” Mr. Romano told The Globe. “I can assure you that at no time was I aware of any of those types of dealings, and my team and I were all very conscious of the rules and made sure we complied with them at all times.”

Under Elections Ontario rules, candidates must report campaign expenses paid by a third party as well as donations exceeding $100.

At the time, the maximum allowable donation to a candidate’s campaign was $1,200 a year, under provincial rules that came into effect on Jan. 1, 2017.

Mr. Romano, a friend of Mr. Brown’s from law school, won a provincial by-election in Sault Ste. Marie in June, 2017, securing the PC Party’s first victory in the Northern Ontario riding since 1981. He said Genevieve Gualtieri, now Mr. Brown’s wife, worked as a volunteer, including knocking on doors, during his by-election campaign.

Mr. Romano said he was “in no way involved with whatever her payment was” and therefore did not include it in his financial statements to Elections Ontario.

John Vanthof, deputy leader of the New Democratic Party, called on the election watchdog to look into the payments, saying money changing hands with no records taints the entire process.

“You shouldn’t have $5,000 here and $2,000 there that isn’t accounted for because that throws the whole process into question,” he said in an interview. “The issue right now is not who knew or didn’t know.”

The court documents are from a Hamilton Police fraud and forgery investigation into a nomination race that took place under Mr. Brown’s leadership in May, 2017. The probe was closed earlier this year, despite police determining that 85 phony ballots were cast at the meeting in a Hamilton-area riding.

The records reveal that Mr. Brown told Mr. Sidhu to make the payments totalling $7,000 on the same day the then party leader agreed to let Mr. Sidhu’s candidate of choice compete for the nomination. Mr. Sidhu has told The Globe Mr. Brown asked for the money as a “friendly favour.”

A spokesman for Mr. Brown, now mayor of Brampton, said in an e-mail that “It is unfortunate that false, exaggerated and out of context snippets from an old closed investigation are being presented in this manner.”

A spokesman for Premier Doug Ford reiterated on Tuesday that his boss was elected party leader to clean up a mess left behind by Mr. Brown, who resigned last year. He said Mr. Ford “knows full-well that MPP Ross Romano did not have any knowledge of Patrick Brown’s dealings and that he personally followed Elections Ontario rules.”

The court documents reveal that in February, 2018, police separately arrested two people who were volunteering at the Hamilton nomination meeting and released them without charge shortly after. They are Jordan Hambleton, who was a PC Party staffer at the time, and Roseann Comrie, who worked for the Regional Municipality of Niagara.

In an e-mail to The Globe, Mr. Hambleton said he did nothing wrong and that investigators searched his phone and other electronic devices.

“The police … did not find a single communication to indicate that I had any involvement in anything other than simply assisting at the nomination,” he said. “I have no knowledge of anything untoward happening at that nomination.”

Asked about the court documents’ mention of a money transfer receipt between him and then-party president Rick Dykstra, Mr. Hambleton said he doesn’t recall the details but that “any exchange of money would have related to one-off expenses.”

Howard Rubel, Ms. Comrie’s lawyer, said she was not involved in any misconduct.

“She followed the procedures as she was instructed to, and has always maintained that she did nothing wrong and was unaware of any improper activities by anyone else who was there,” he said. 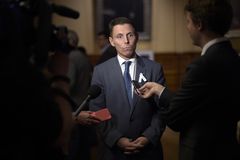 Follow Karen Howlett and Jill Mahoney on Twitter @kahowlett @jillsmahoney
Report an error Editorial code of conduct
Due to technical reasons, we have temporarily removed commenting from our articles. We hope to have this fixed soon. Thank you for your patience. If you are looking to give feedback on our new site, please send it along to feedback@globeandmail.com. If you want to write a letter to the editor, please forward to letters@globeandmail.com.
Comments are closed