Ontario and Quebec, both hit hard by COVID-19 at seniors’ facilities, are making significant changes in how they staff long-term care homes as they struggle to reduce the number of cases and fatalities.

Ontario issued an emergency order Tuesday night banning employees from working in more than one facility, after weeks of concerns raised by health care experts about transmitting the deadly virus between care homes.

The move comes more than three weeks after British Columbia prohibited staff from working at multiple sites, while Alberta announced a similar measure last Friday, although it won’t be implemented until late this week.

In addition to the staffing order, Ontario Premier Doug Ford will release an enhanced “action plan” on Wednesday with additional resources, including topping up salaries for part-time workers and deploying hospital care teams to help manage outbreaks. “Despite our best efforts, we’re dealing with a wildfire at our long-term care homes,” he said.

In Quebec, to mitigate chronic staff shortages, Premier François Legault’s government is calling for volunteers with a medical background to help out in homes, and will allow relatives who were already recognized caregivers to return to long-term care centres.

Outbreaks at seniors’ homes linked to almost half of COVID-19 deaths in Canada, Theresa Tam says

Those caregivers would have to test negative for the new coronavirus, keep away from other employees and residents during their visits, and wear medical protective equipment, Mr. Legault said Tuesday.

“We think that, considering the lack of personnel in long-term care centres, it is worth asking relatives who are already caregivers to lend a hand,” he told reporters.

COVID-19 has caused more than 900 deaths across Canada, and close to half of those have occurred in long-term care homes.

In Ontario, there have been more than 180 deaths in seniors’ homes, according to The Globe and Mail’s reporting. Almost 200 seniors’ facilities in the province have had one or more cases of COVID-19 in residents or staff. And in Quebec, nearly half of the 435 deaths for the coronavirus have taken place in seniors’ facilities. At least three long-term care centres have 26 deaths or more. Thirty-one residents, with at least five confirmed to be related to COVID-19, died at the Herron nursing home in Dorval after it lost most of its staff because of the outbreak.

Like other jurisdictions, including Ontario, Quebec banned visits to seniors’ facilities to curb the spread of the pandemic, except for compassionate reasons when death is imminent. However, relatives said the lockdown made it harder for them to help their elder parents and to monitor the quality of care they receive.

Mr. Ford acknowledged on Tuesday that more needs to be done at seniors’ facilities. “The sad truth is our long-term care homes are quickly turning into the front line of the fight against this virus.”

Mr. Ford said the province’s hospital system has not been hit with the surge of COVID-19 cases it had expected, and health care resources should be redeployed to homes where there is a “serious outbreak.” He said the province will draw from a previously announced $243-million fund to cover much-needed staffing as well as the cost of increasing hours for part-time staff for the province’s 626 licensed long-term care homes.

In response to the worsening situation at care facilities, the federal government published new guidelines on the weekend to reduce the spread of infections, which includes a recommendation that staff work only in one home. Prime Minister Justin Trudeau said Tuesday that while long-term care remains a provincial responsibility, he is looking for ways to support the provinces.

“We’re in conversation with the provinces right now on moving forward on a model of increasing support for long-term care workers,” he said, noting that Quebec has granted a one-time bonus of $4 an hour to workers dealing directly with patients.

Doris Grinspun, chief executive of the Registered Nurses’ Association of Ontario, said her organization has for weeks been calling for the province to ban multiple workplaces. While the chief medical officer of health recommended staff do not work in more than one facility, many personal support workers are holding down several jobs in order to make ends meet.

“This should have come a long time ago,” she said. “We have very little time left … to improve the outlook.”

Sharleen Stewart, president of Services Employees International Union Healthcare (SEIU Healthcare), said her union also warned Mr. Ford’s government about the vulnerabilities in the sector “weeks ago.” She called the moves “half-measures” that are “too little, too late,” and called on the government to “implement consistent wages across the province to ensure there are no incentives to leave the lowest-wage facilities.”

In Quebec, director of public health Horacio Arruda said caregivers would only be allowed in long-term care centres, on a voluntary basis, with only one caregiver per patient. He estimated that about 10 per cent of long-term care patients were previously getting help from caregivers, who were dispensing food, drinks and helping clean them. The return would begin Thursday, Dr. Arruda said.

He acknowledged that the province is now realizing that asymptomatic carriers who were kept on staff might have caused the deadly outbreaks in seniors’ homes. “That led to the deaths we’ve seen currently, which unsettle all of us," he said.

Quebec also announced last week that it was transferring doctors and nurses from its hospital networks to seniors’ facilities because the expected surge in intensive-care COVID-19 patients had been manageable so far while deaths in long-term care centres were rising. Quebec has not prohibited employees at care facilities from working at more than one home.

Opinion
Ontario’s lack of diversity data for COVID-19 is an embarrassment
April 15, 2020 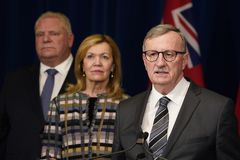 Coronavirus information
The Zero Canada Project provides resources to help you manage your health, your finances and your family life as Canada reopens.
Visit the hub
Follow Laura Stone and Tu Thanh Ha on Twitter @l_stone @TuThanhHa
Report an error Editorial code of conduct
Due to technical reasons, we have temporarily removed commenting from our articles. We hope to have this fixed soon. Thank you for your patience. If you are looking to give feedback on our new site, please send it along to feedback@globeandmail.com. If you want to write a letter to the editor, please forward to letters@globeandmail.com.
Comments