Quebec reached more than 100,000 total cases of COVID-19 on Sunday, becoming the first province in Canada to hit the somber milestone since the pandemic began in March.

But despite remaining the country’s coronavirus epicentre, public health experts say a recent downward trend of infections is an encouraging sign.

“It’s a moment where we all sit up and say wow, 100,000 — that’s a lot of zeroes,” said Erin Strumpf, an associate professor at McGill University specialized in health economics.

“But again I think the more important thing to be paying attention to is the trend that we’ve been seeing recently in the province.”

The province reported 879 new cases on Sunday, bringing the total to 100,114 infections since the start of the pandemic.

The curve of new infections appears to have flattened over the past few weeks though, Strumpf said in an interview.

That downward trend, she said, coincides with stricter public health guidelines that aimed to stem the spread of the virus.

The government ordered the closure of bars and gyms, among other places, in hard-hit areas and advised residents to limit their contact with people who do not live in their households.

Montreal and Quebec City are among several Quebec regions that remain under the highest COVID-19 alert.

Strumpf said it is hard to pinpoint what exact measures are responsible for flattening the curve, however.

She added that she expects to see many public health restrictions remain in place moving forward. “It’s very difficult to know right now or to predict how long those closures may stay in place,” she said.

Still, the high COVID-19 infection numbers bring up painful memories for Quebecers who lost loved ones during the pandemic.

July Mak, whose 68-year-old father Paul contracted COVID-19 in a long-term care home in Montreal and died at the end of March, said the pain of her father’s death has not eased with time.

“To see these numbers this high... it blows my mind,” Mak said in an interview Sunday.

She said she wants the Quebec government to recognize that its COVID-19 data is more than just numbers -- and thousands of people across the province have been directly affected.

“They mattered,” Mak said, about the thousands who have died.

On Sunday, Quebec Health Minister Christian Dube said on Twitter that the number of new infections is “stable but remains high.”

Those cases can turn into hospitalizations and deaths, Dube warned, urging Quebecers to remain vigilant to reduce transmission.

Five of those additional deaths took place in the past 24 hours, five were reported between Oct. 18-23 and one occurred at an unspecified date.

Hospitalizations went up by two across the province, for a total of 551. Of those, 97 people were in intensive care — an increase of four compared to the previous day.

The province said it conducted 25,378 COVID-19 tests on Friday, the last date for which the testing data is available. 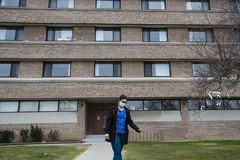 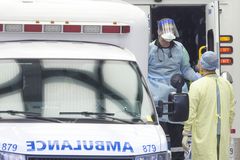