Several Ontario school boards are scrambling to put plans in place for asymptomatic testing after the province gave them only days to implement a new approach that includes weekly targets.

Ontario is the only place in Canada to set targets for asymptomatic testing in all of its 72 school boards. Mr. Lecce said this week that the province would create a more “rapid, nimble system” in identifying cases, especially as more transmissible COVID-19 variants circulate in the community. He said that the Ministry of Education has capacity for up to 50,000 tests a week in schools, a mix of both polymerase chain reaction (PCR) and rapid tests.

The memo to boards, which was also provided to the media, was sent on Tuesday, and said that Toronto, York and Peel were to implement the program this past week, while the remaining boards will begin next week. The Toronto District School Board had pop-up testing centres in six of its schools this past week, and nearby schools were invited. To meet the 5-per-cent target, it would need to offer tests to about 30 schools a week.

Andréa Grebenc, chair of the Halton District School Board, west of Toronto, said targeted asymptomatic testing is the “right direction,” but she also expressed frustration that boards were only given days to prepare.

“Our board is supposed to start this next week. On top of everything else that’s going on, suddenly they [staff] have to deal with this, too,” Ms. Grebenc said.

She had hoped the Ministry of Education would speak with boards before sending directives. “We wouldn’t be in a scramble state, and that’s what it feels like we’re in,” she added.

Similarly, Melinda Chartrand, chair of the Conseil scolaire catholique MonAvenir, a Catholic French-language school board, said that she was still awaiting answers on how to implement the testing in schools. Her board stretches from the Niagara Peninsula to Peterborough and from Toronto to Georgian Bay, encompassing 13 public-health units that would help co-ordinate the testing to different degrees.

“Like all the boards, our priority is to ensure that our kids are returning to a safe environment,” Ms. Chartrand said. However, she added, “it is a challenge … it may not be ready in one week. It may take two to three weeks.”

The government said school boards could work with their local public-health units to identify schools for testing in areas with either high community transmission or if symptomatic cases are identified in classrooms. Testing is voluntary. Either the public-health unit through a local hospital or a ministry-supplied private vendor would conduct the testing in schools.

Sharon Pyke, a superintendent of education at the Greater Essex County District School Board in Windsor, said late on Thursday that she was still waiting for the Ministry of Education to connect her board with a vendor. (A school board spokesman said Friday afternoon that it had just learned who its vendor would be but had not connected as yet). The local public-health units will be providing data on where community transmission is high, so schools in those areas can be offered testing.

Elsewhere in the country, testing for students and school staff does not extend beyond those who are symptomatic or when there is an outbreak in a classroom.

In Quebec, there is no plan for systematic use of asymptomatic testing in schools. Public-health officials have also been reluctant to deploy rapid tests because they are less accurate, either for children who are symptomatic, or for asymptomatic children exposed to a confirmed case. Pilot and research projects involving a handful of schools are under way and public-health officials also use them sometimes when outbreaks take place.

Doctors in Ontario have been calling for more robust testing in schools, especially as another layer of protection for students and staff.

Janine McCready, an infectious-diseases physician at Toronto’s Michael Garron Hospital, said the literature suggests that somewhere from 30 per cent to 50 per cent of children may be asymptomatic. In areas of high community transmission, testing in schools is “potentially beneficial” in finding cases quickly and to prevent transmission within a school, she said.

“In theory, it’s a good idea, and I think that we do need … it in a very thoughtful, pro-active way,” Dr. McCready said. 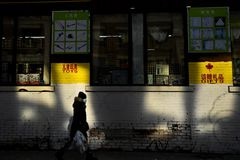 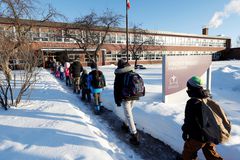