Amar Marouf was looking forward to returning to Carleton University in Ottawa in the fall – that is, until he saw the estimate for his financial-aid funding. Now, he’s crunching the numbers to figure out whether his second year studying international law and social justice can even be a reality.

Last year, Mr. Marouf received enough aid from the Ontario Student Assistance Program (OSAP) to cover his tuition and his textbook costs, through a combination of grants and loans. This year, his grant funding has been cut by almost 60 per cent.

The student is the first in his family to attend university, the eldest of five siblings, and was raised by a single mom in a low-income housing area in Ottawa. He works – often several jobs – to help support his family.

“Even though the system wasn’t perfect before, it was working, to a large extent,” Mr. Marouf said. “And especially for people in poverty, [OSAP] was the only way out and education is still seen as the only way out, this idea that to improve your future you need this education.”

Mr. Marouf is one of thousands of postsecondary students who found out this week what Ontario Premier Doug Ford’s sweeping changes to postsecondary funding, announced in January, will mean for them in dollar amounts.

The announcement on the changes to OSAP came with other revisions – namely, a 10-per-cent cut to domestic tuition, which institutions have to absorb on their own, and an initiative that allows students to opt out of fees deemed non-essential. The provincial government said these decisions will simplify an often-complex system and improve its financial sustainability. The changes return the program, which was overhauled by the previous Liberal government, to something more similar to the pre-2016 format.

In a statement, the Ministry of Training, Colleges and Universities cited the Liberals’ OSAP structure as financially “irresponsible and unsustainable.”

“We are restoring financial sustainability to OSAP, to ensure the program supports the students who need it the most for years to come,” the statement reads.

The province said it would cut $670-million from the OSAP program and place more priority on benefiting low-income students, whose household income falls below $50,000.

Mr. Marouf says that his family’s household income falls below this threshold.

Merrilee Fullerton, the former minister of training, colleges and universities, who was at the forefront of the changes to postsecondary funding, was moved out of the portfolio as Mr. Ford made extensive changes to his cabinet this week. Ross Romano, MPP for Sault Ste. Marie, has joined the cabinet as the new minister. Neither were available for an interview.

Many students say they’ll have to pick up another job, shift to taking classes part-time, move farther away from their schools to find cheaper accommodations and lengthen their commute, or apply for a line of credit. Others, such as Mr. Marouf, are left in doubt as to whether they’ll be able to attend school in the fall at all.

Brianne Watkins, who is due to start her fourth year at Ryerson University in Toronto this September, says she has had her OSAP funding, across grants and loans, cut by more than one-quarter as compared to the previous academic year.

She provides daily care for her mother, who suffered a stroke when Ms. Watkins was in her first year of university.

“I don’t know how I could work, take care of my mom and take a full-time course load. It’s just too much,” Ms. Watkins said.

The Ontario branch of the Canadian Federation of Students (CFS-O), which represents more than 350,000 students across the province, has started a campaign called “Locked Out of Education” in an aim to demonstrate the effect the new policies are having on some students.

“Students are going to think twice before going to education. And it’s not because they’re not passionate about what they want to study, but it’s literally because of the price tag,” said Kayla Weiler, the national executive representative of the CFS-O.

About 25 members of the organization headed to Mr. Ford’s constituency office on Friday morning to demonstrate. The federation supports the tuition cuts, but wants to see additional funding from the government to help subsidize the price of postsecondary education even further.

Ms. Weiler said that while it’s too early to tell how many students have been detrimentally affected, the CFS-O has seen an outcry online.

“There’s just so many people from diverse backgrounds that it’s affecting everyone in different ways. But at the end of the day, it’s still threatening so many people’s ability, or now their inability, to pursue their studies,” Mr. Marouf said. 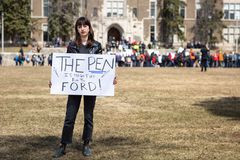