Ontario is creating a new strategy to test for COVID-19 in asymptomatic people in high-risk groups, including first responders, taxi drivers, workers in meat-packing and auto plants, and school-aged children, in order to figure out where the virus is spreading and how to get it under control.

The province, facing growing criticism for its pandemic response as the number of new cases climbs daily, is set to announce the new testing strategy this week. It’s a significant move that will see Ontario shift part of its testing resources into a detective-like mode, searching for asymptomatic COVID-19 carriers in groups that have a higher likelihood than the general population of transmitting the illness to others.

“That will help us get a better understanding of the potential illness through the community and really help us to determine and inform and ensure the safety of the public as we open up the province over the next little while,” Dirk Huyer, Ontario’s chief coroner, said in an interview.

Dr. Huyer and Matthew Anderson, chief executive of Ontario Health, will oversee the new targeted surveillance strategy. While the final details of who will be included in that testing are still being determined, Dr. Huyer said plans are moving quickly to get that testing up and running.

In the meantime, Ontario announced on Sunday it is expanding its criteria for community-based COVID-19 testing again, this time to include asymptomatic individuals who may have been exposed to the disease. Under the expanded criteria, anyone without symptoms who fears they have been exposed to COVID-19, as well as anyone at risk of exposure through their jobs, such as health-care workers or grocery store employees, can get a test.

“Even if you’re not showing symptoms, please go get a test,” Premier Doug Ford said Sunday. “And bring your family along with you to get tested.”

While infectious disease experts have been calling on the province to do more asymptomatic testing, some say the move to let anyone undergo a test is too unfocused and could make it harder for the province to focus on finding the hot-spots of disease spread in the community.

Janine McCready, an infectious diseases physician at Toronto’s Michael Garron Hospital, said this messaging is problematic and could “do more harm than good." For instance, some people may go for a test one day after being potentially exposed to COVID-19, which is too early for a result to come back positive.

“I think it’s great that we’re going to test more people, but there needs to be an actual organized strategy,” she said.

Vera Etches, Ottawa’s medical officer of health, tweeted on Sunday that diagnostic tests can’t be used to tell whether someone has recovered from COVID-19 and it’s possible for there to be false results, so they need to be interpreted with caution.

Experts say asymptomatic testing should focus on people at high risk of contracting and spreading the disease, such as those who work in close quarters with others. Dr. McCready said she and her colleagues have been sending mobile teams to carry out asymptomatic testing in areas of the community where many positive cases are coming from.

“We’re going to look for where the cases are and structurally test those things in an organized fashion,” Dr. McCready said.

When asked about criticism about confusing messaging, a spokesperson for Ontario Health Minister Christine Elliott said the province is looking to use asymptomatic testing to target some groups. Individuals who want a test and get a negative results should still monitor their health for potential changes, the spokesperson said.

Vanessa Allen, the chief of medical microbiology at the Public Health Ontario Laboratory, said the province has a three-pronged testing strategy: recommendations for people with symptoms; testing people affected by outbreaks in long-term care and other group facilities; and a more pro-active surveillance plan designed to catch and stop wider spread of the disease.

Mr. Anderson and Dr. Huyer are focusing on the third pillar, pro-active surveillance. While David Williams and Barbara Yaffe, the province’s Chief and Associate Chief Medical Officers of Health, have for weeks resisted the idea of broader testing of asymptomatic individuals, the new strategy will focus on exactly that.

The number of COVID-19 cases is on the rise again in Ontario, what some infectious disease experts and hospital executives say is a consequence of the province’s inconsistent messaging, lack of clear direction and too many layers of bureaucracy.

They say that Ontario’s messages to the public have been inconsistent and confusing, such as when Mr. Ford visited with his daughters, who don’t live with him, despite public-health rules against such gatherings. And while Dr. Williams said COVID-19 cases would have to decline for two to four weeks before the province started reopening, Mr. Ford moved ahead with stage one anyway.

David Fisman, an epidemiologist at the University of Toronto’s Dalla Lana School of Public Health, said the poor communications coming from public-facing leaders such as Dr. Williams and Dr. Yaffe could explain, in part, why the province is continuing to struggle with containment while others have largely suppressed COVID-19.

“You listen to [Dr. Williams] and it’s like watching someone shovel fog,” Dr. Fisman said. “How is the public supposed to buy in?”

Experts also questioned whether increased testing will be effective as long as the province continues to face problems with conducting rapid contact tracing of people possibly exposed to COVID-19.

Ontario reported 460 new COVID-19 cases on Sunday, up from 412 the previous day, a worrisome trend that experts fear will worsen now that the province has begun reopening.

Many of the cases are in the Greater Toronto Area. This weekend, thousands of people flocked to Toronto parks, many shoulder to shoulder, eliciting anger from city officials and Mr. Ford.

“We just can’t have that right now,” Mr. Ford said Sunday. “There’s still a deadly virus amongst us and if we allow it, it will spread. It will spread like wildfire.”

Mr. Ford added that many of the young people in the parks could pass the virus onto their parents or grandparents, who are more likely to suffer serious complications. Provincial data show that while the vast majority of deaths are in people 60 and older, younger age groups make up a substantial portion of COVID-19 cases, suggesting they are key drivers of transmission. 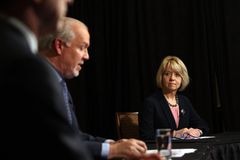