Ontario will permit outdoor dining in Toronto and Peel Region while also allowing more people to gather indoors at restaurants in other areas, even as health officials urged caution in the face of more contagious and deadly COVID-19 variants.

The move to loosen rules for restaurants and bars, which take effect Saturday at 12:01 a.m., was made as Premier Doug Ford announced that Ontario is opening up vaccine appointments to adults 75 and over starting Monday.

The decision by Mr. Ford’s cabinet to allow outdoor dining in the grey lockdown zones – which include Toronto, Peel, Lambton, Sudbury and Thunder Bay – was accompanied by a surprise move to expand capacity limits for restaurants in the red and orange zones.

The changes mean that restaurants in the red zone will go from a 10-person maximum indoors to 50-per-cent capacity or a maximum of 50 people. In orange, the previous 50-person maximum indoors goes to 100. The government says patrons can only dine with members of their households, unless they live alone. Ontario also recently relaxed capacity limits for churches and religious ceremonies in lockdown regions.

“Why are we relaxing restrictions at the same time as cases rise exponentially? That sends all the wrong messages,” said Irfan Dhalla, a physician and vice-president with the Unity Health Toronto network of hospitals.

Ontario reported 1,745 new COVID-19 cases on Friday, up from 1,553 a day earlier, and Ontario’s top doctor, David Williams, said this week that the province is in a “third wave,” although it’s not yet clear how severe it will be.

Earlier this week, the medical officers for Toronto and Peel said they were in talks with the province to allow for more outdoor activities. The government said Friday discussions were still under way.

In a statement, Toronto praised the shift in restrictions -- saying that residents needed an approach that protected their mental well-being while also seeking to limit the spread of COVID-19 -- and said that medical officer of health Eileen de Vila had requested more vaccine doses for the city.

“The request for this cautious approach balances the impact of the pandemic on the community with the current limited vaccine supply, the emergence of variants of concern and improving weather conditions that will permit more effective use of outdoor space,” the city said.

Health Minister Christine Elliott said earlier on Friday the province needs to move quickly to vaccinate residents in the face of more transmissible variants that she warned will cause more hospitalizations and deaths.

“It’s almost a race against time for us to be able to get as many needles into people’s arms as possible to protect people and keep them safe as the variants of concern continue to grow in Ontario,” Ms. Elliott said. “We have to still be very cautious. This is still a very precarious time.”

Meanwhile, the province’s centralized booking system, which launched this week for adults 80 and over, will start taking appointments for those 75 and up on Monday at 8 a.m. This includes people who are turning 75 in 2021.

More than 50 per cent of the province’s adults 80 and older – about 340,000 people – have now received at least one dose, Mr. Ford said. This includes long-term care residents, most of whom have received two shots.

Retired general Rick Hillier, chair of Ontario’s vaccination task force, said appointments for those 80 and over have slowed, allowing the province to open bookings for younger seniors about two weeks ahead of schedule. Some regions, such as York Region and Halton Region near Toronto, have already moved on to 75 and up. Mr. Hillier also estimated the next group of seniors, 70 and up, will be able to get shots in early April.

The government will also allow adults 60 and over to start receiving AstraZeneca jabs at doctor offices and pharmacies, which were previously offered only to those 60 to 64. Recent guidelines from the National Advisory Committee on Immunization said AstraZeneca can be used for all adults, not just those under 65.

The government said over the next two weeks, it will become available at an additional, yet-to-be-disclosed 350 pharmacies across the province for a total of 700 locations, and 1,500 locations by April. Depending on supply, pharmacies could administer up to 40 per cent of all vaccinations, including the Moderna product, by the end of April.

Mississauga Mayor Bonnie Crombie said Friday she wants her city, which is in hard-hit Peel Region, to be able to start giving out AstraZeneca in pharmacies immediately.

“I’m disappointed Mississauga hasn’t been included yet and I’m strongly urging the province to immediately include all of Peel in this program,” she said on Twitter.

Ontario has faced pushback during its vaccine rollout for prioritizing professions such as naturopaths, chiropractors and registered massage therapists, and for vaccinating firefighters and some police officers, before most of the province’s adults who are 65 and older. 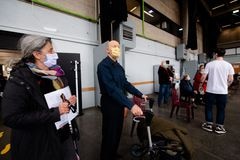 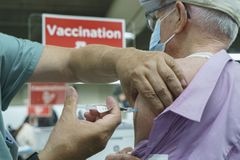