Ontario is set to outline a new system with specific criteria for imposing COVID-19 restrictions, as mayors in Toronto-area hotspots push the government for a safe reopening plan for businesses.

The new framework, expected to be announced Tuesday, is intended to offer more clarity by defining different levels of restrictions for businesses, such as indoor restaurants and gyms, which were ordered to close temporarily in the COVID-19 hotspots of Toronto, Ottawa, and Peel and York regions.

Premier Doug Ford’s government will have to decide this week which businesses can reopen, and under what conditions, after the 28-day restrictions in Toronto, Ottawa and Peel expire this weekend. The restrictions in York lift a week later, with that region making recommendations on Monday about stricter measures for restaurants and gyms once they reopen. Those four regions were all part of a “modified stage 2” plan, which closed some high-risk settings but has kept schools and daycares open.

Over the past week, case counts in Ontario have ranged between 827 to 1,015 a day, which health officials have said would be the norm.

“I know a few people were a little upset 28 days ago … and it was the right decision, I can assure you," Mr. Ford said.

Vera Etches, Ottawa’s Medical Officer of Health, said Monday she wrote to Ottawa Mayor Jim Watson about the need for a new approach to the pandemic. “We need to be learning to live with COVID, to coexist with COVID, with caution,” Dr. Etches said in a tweet.

Ontario’s associate medical officer of health, Barbara Yaffe, said while Ottawa’s case numbers have improved dramatically, with that city reporting only 61 cases on Monday, that has not yet been in the case in the three Toronto-area regions.

But Toronto Medical Officer of Health Eileen de Villa said the city has reached a plateau of about 300 new cases a day, and the situation is not “escalating.”

Dr. de Villa did not rule out localized restrictions that may see some neighbourhoods within the city facing tighter measures than others depending on how they’re affected by the virus.

Infectious-diseases doctor Andrew Morris, medical director of the antimicrobial stewardship program at Sinai Health System and University Health Network in Toronto, said Ontario has to get its numbers “dramatically under control” before any widespread restrictions are lifted. He said that also includes increased testing, surveillance, contact tracing and hospital capacity.

“The Premier is feeling business pressure, as he should, because businesses really are struggling and I think that’s an absolutely huge consideration," Dr. Morris said. “I’m just at a loss to know how, with the numbers that we have, we can feasibly open up without … tremendous risk.”

Mayors and chairs in 11 regions in and around Toronto, including Toronto Mayor John Tory, Brampton Mayor Patrick Brown and Markham Mayor Frank Scarpitti, said in a letter on Monday they support the province’s plan to establish a reopening framework.

“All the mayors and chairs agreed that we want businesses currently closed due to the modified stage 2 measures, to be able to reopen safely and to remain open,” the letter said.

York, which includes the municipalities of Markham, Vaughan, Richmond Hill and Newmarket, on Monday released a list of specific recommendations to the province on how to reopen safely.

Those include patrons in bars and restaurants wearing a mask at all times, both indoors and outdoors, when not eating and drinking; reducing hours of operations in restaurants; and requiring gyms to implement a maximum capacity based on physical distancing and the square footage of the facility.

“The approach that we have taken is one of recognizing there is some risk here, but by increasing the restrictions further, we would be in some ways reducing the extra risk. So it’s a question of balancing the livelihoods of people with the needs to minimize the numbers of cases of COVID-19,” said Karim Kurji, York’s Medical Officer of Health.

At a Monday news conference alongside Mr. Ford, Bonnie Crombie, the mayor of Mississauga, in Peel Region, said that social gatherings are the main cause of transmission in her city.

“We’re not seeing the transmission occurring in our restaurants, our bars and our gyms, but we are seeing it from social transmission, from social gatherings” such as dinner parties and barbecues.

“We’ll have to better control and better enforce those social gatherings," she said.

In a letter to the provincial and federal governments last week, Ms. Crombie said the return to a modified Stage 2 has had a “tremendously negative impact” on local businesses, and warned that the city could see thousands of businesses fold permanently if the restrictions continue much longer.

Lawrence Loh, Peel’s Medical Officer of Health, said the numbers in Peel indicate “we may need to adjust the current restrictions to target specific settings where we are seeing the highest transmission.” 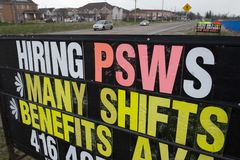 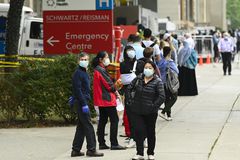 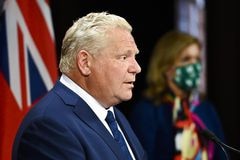 Follow Laura Stone,  on Twitter @l_stone
Report an error Editorial code of conduct
Due to technical reasons, we have temporarily removed commenting from our articles. We hope to have this fixed soon. Thank you for your patience. If you are looking to give feedback on our new site, please send it along to feedback@globeandmail.com. If you want to write a letter to the editor, please forward to letters@globeandmail.com.
Comments