Ontario’s elementary students will learn how to code starting in Grade 1, add fractions in Grade 5 and carry out financial planning in Grade 6. They will have to recall number facts, and go back to memorizing multiplication tables up to 12 times 12.

The province on Tuesday rolled out a new math curriculum for the fall that comes as standardized test scores have stagnated or fallen, and educators and parents have debated how the subject is being taught in classrooms.

Education Minister Stephen Lecce defended releasing a new curriculum in the middle of a pandemic. It is unclear what school will look like in the fall for the province’s two million students, and they could return to a model that blends in-class instruction with remote learning.

“I would argue from a competitive landscape, we must take action immediately to improve math scores,” Mr. Lecce said on Tuesday, adding: “I appreciate the broader challenge around us, but we must move forward with these necessary reforms to give hope to these students that when they graduate they can aspire to get a good-paying job.”

The province also said it was cancelling standardized testing in reading, writing and math for students in Grades 3 and 6 for the coming school year as the new math curriculum is adopted.

The way children learn math has been a worry in many parts of the country. In Ontario, more and more children have struggled to meet the provincial benchmark on standardized tests. In the 2018-19 school year, only 58 per cent of Grade 3 students reached those benchmarks; in Grade 6, it was fewer than half – 48 per cent.

Some parents have called on provincial governments to take a back-to-basics approach to teaching the subject, emphasizing repetition and drills in the early years over problem-solving.

Under the new Ontario curriculum, which was last updated 15 years ago, children are expected to learn how to code starting in Grade 1. They will start by learning how to sequence, and government officials said that could involve programming a caterpillar to move by a few steps in different directions using arrows.

The curriculum also includes financial literacy for all elementary-school grades. In Grade 4, for example, students will learn about various payment methods. They will learn about the different ways to transfer money, including e-transfer, in Grade 5, and financial planning in Grade 6.

Students in Grade 5 are expected to learn how to add fractions, as opposed to Grade 7 in the previous curriculum. A ministry official said students struggle with fractions and need more time understanding them.

The government said the new curriculum will be mandatory for the coming school year, and teachers will receive resources and training as early as this month.

However, some questioned the timing of the rollout.

Sam Hammond, president of the Elementary Teachers’ Federation of Ontario, said his members are not opposed to improvements to the curriculum. But he argued that it should not be rushed into schools at a time when educators will be helping students with learning gaps as a result of schools being closed since mid-March.

“Rolling out a new curriculum takes time. Given the significant changes to the math curriculum, and the fact that Ontario is still in the midst of a pandemic, successful implementation will require more than the two-month timeline that the ministry has set,” Mr. Hammond said.

Ontario NDP education critic Marit Stiles called it “irresponsible” to mandate a new curriculum as educators and students are focused on the return to school. “Adding new demands at this point is setting up students to fail,” she said.

The government said last fall that it was investing $200-million over four years on a math strategy that included professional development for teachers as well as coaches and online tutoring programs for students. (The money was a continuation of the funding put in place by the previous Liberal government.) It also initiated a math proficiency test for future teachers and promised to roll out a new curriculum.

Premier Doug Ford campaigned on a promise that, if elected, he would change the curriculum so that students would focus on learning basic arithmetic, rather than what his government called “discovery math,” which emphasizes group problem-solving and expressing ideas through different techniques.

He said on Tuesday that the new curriculum “goes back to basics,” but also “equips our next generation of leaders and community builders.”

Mary Reid, an assistant professor of math education at the University of Toronto’s Ontario Institute for Studies in Education (OISE), said the changes and additions to the math curriculum are welcome. Still, Prof. Reid expressed worry about releasing a new curriculum during an anxious time for educators and students.

“So far, it’s good,” Prof. Reid said of the document. “Timing wise, it’s bad. Districts are working so hard to figure out what’s going to happen in September. The last thing they need is a new initiative.” 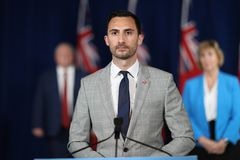 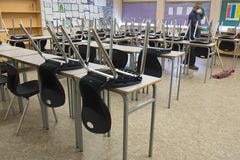 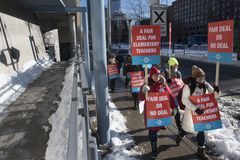